Update June 4: Shares of AMC ended lower by 17.92% after ranging between a low of $37.66 and a high of 68.80. The stock spiked into resistance before sliding in hourly tiers to meet hourly support at $45.77. From a daily perspective, the price has stalled ahead of a 61.8% Fibonacci retracement of the May rally's range.

Update June 3: Wall Street edged lower on Thursday after the US Federal Reserve announced it would start unwinding a pandemic corporate credit facility, although US indexes got to bounce ahead of the close after the country reported impressive employment-related numbers. AMC shares traded alongside the market's sentiment, instead of the usual meme frenzy, dragged up and down by mood swings. It's down 20.43% for the day, but trading above $ 51.00 retaining most of its latest gains. 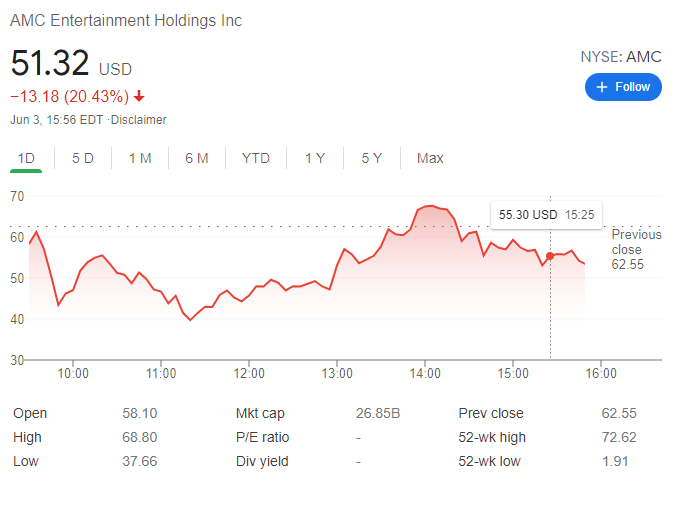 Previous updates: Shares of AMC topped out. The stock ended trading 95.22% higher to 61.55, jumping from 35.59 to a high of 72.62. The 1-hour chart was consolidating the strong bid in the New York session. Overall, for when trading resumes, the stock is well supported by the bullish 10 and 20 EMA divergence on the 4-hour chart with MACD heading higher. From a 15-min perspective, the stock had dropped below the 10-EMA but had found support on the 20 EMA and the horizontal 15-min support structure.

Shares of AMC  soared to $61.72, up over 92% on the day. Mid-US session, trading has been halted. The movie theatre chain is part of the meme stocks' wave. The entertainment sector has been hit hard by the pandemic, leading to plummeting revenues and putting the company on the verge of insolvency. As the US moves into immunization, hopes for a return to normal boosted the stock. AMC is up more than 2,800% year to date.

Previous update: There seems to be no stopping to AMC Entertainment Holdings )NYSE: AMC). The movie theater company is not only benefiting from ticket sales on the long Memorial Day weekend, but also by a fresh concerted attempt to squeeze out shorts. At the time of writing, AMC is up by nearly 20% and changing hands above $38.

AMC just keeps on giving as the stock soars to further highs in Wednesday's premarket. Traders were buoyed on Tuesday by the announcement that Mudrick Capital had bought shares in AMC, enabling the cinema operator to raise cash and go on the offensive. However, in a late day twist, Mudrick said they had sold their entire position as they thought AMC to be overvalued, according to Bloomberg. This appears to have emboldened traders on the various social media sites who have pushed the stock to new highs during Wednesday's premarket. Mudrick reaped a nice profit for a quick trade, and there is nothing wrong with that. The shares were not subject to a lockup, so they were free to do with them as they pleased.

Clearly, they did not fully count on the power of retail and left plenty behind them as AMC shares breached $40 in Wednesday's premarket. AMC is doing only what it should be doing – raising money in an easy environment. The retail frenzy has made raising cash much easier for a number of companies as investors appear to be unfazed by the dilutive effects of share sales. While share sales are generally dilutive (assuming new shares are issued), the cash raised helps to underpin the balance sheet, restructure debt and help companies survive. This is exactly what AMC has done as it cleverly avoided bankruptcy, which was a distinct possibility at the start of the pandemic. AMC has raised over $1 billion through share sales since the retail frenzy began.

New shorts continue to enter the market as the price appreciates, creating a battle between the short sellers and the retail traders. It is a matter of firepower at this stage, and for the most part the short-sellers have been woefully underestimating the firepower of the retail trading group. While the fundamentals of AMC may seem way too stretched, this has long since been a momentum play and the old adage that "the market can stay irrational longer than you can stay solvent" is very applicable here. At some stage, the music will stop, and you do not want to be left without a seat, or at the very least a stop! A few scenarios can emerge. At some stage, retail will have filled themselves up, and the price rise will stall. At this stage new shorts may enter and push the price down or the shorts may have given up leading to a sudden drop in volume and volatility. GameStop eventually ran out of firepower up at the higher levels near $500, but it did not retreat to pre-frenzy levels as the shorts have given up on this one, and so the stock has been relatively stable around $200. AMC shares are currently trading above $40, while the average Wall Street analyst price target for AMC is $3.70, according to Refinitiv. The latest SEC filing shows Chief Marketing Officer Stephen Colanero selling 15,000 shares for approximately $411,000. It is unclear how much of Mr. Colanero's holding this represents, so it may not be material.

There is not much to say technically about AMC now that it has blown through all previous highs. The momentum oscillators are strongly overbought, but these can stay overbought for some time. Another possibility is that price consolidation can return them to neutral levels and do not necessarily have to result in a price reduction. 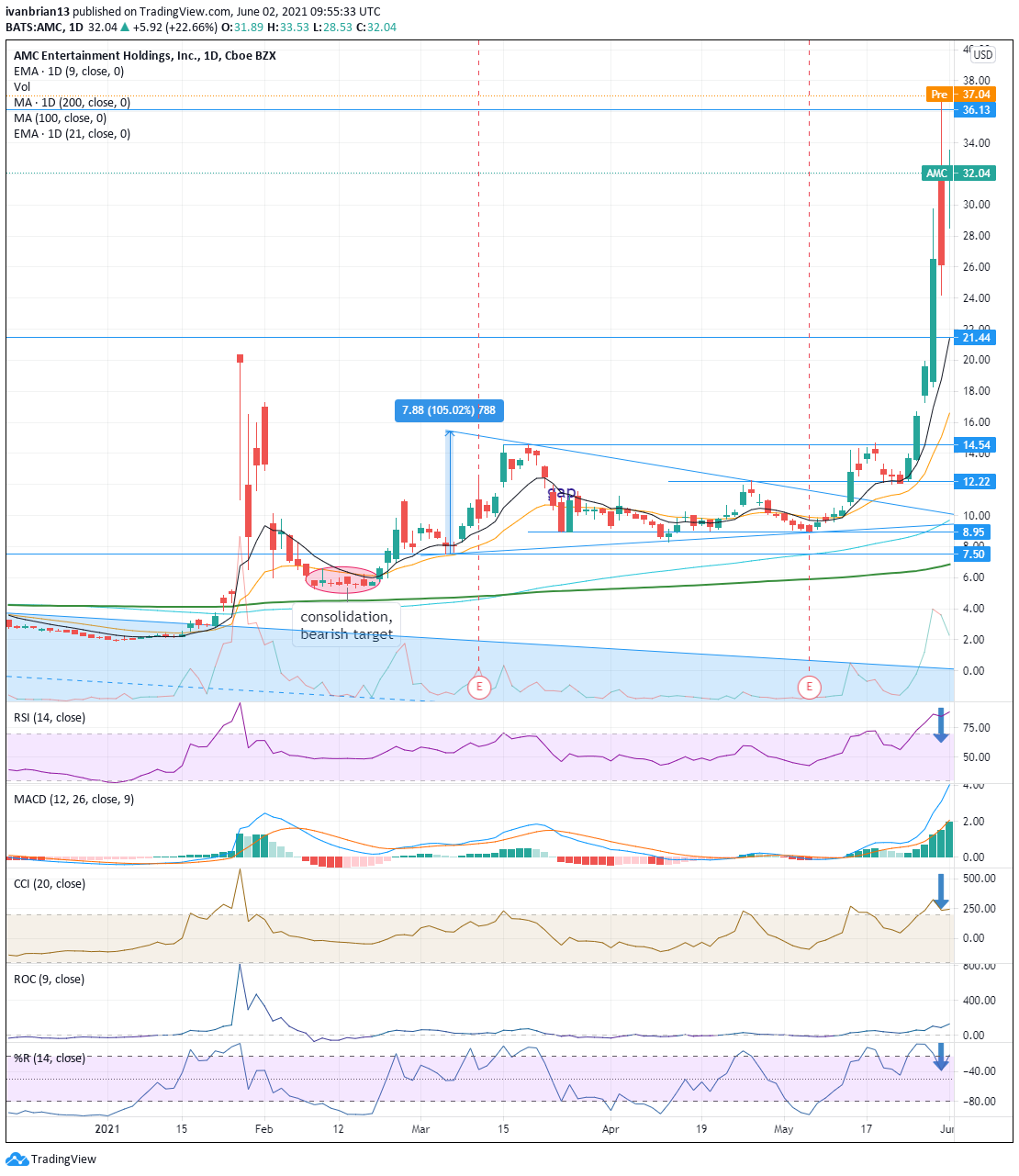 AUD/USD traders get set for this week's RBA key event

AUD/USD corrected from a key area on the charts on Friday with a test back through 0.64 the figure hardly left a mark on the downtrend that remains the bias for the start of the week and ahead of the Reserve Bank of Australia.

EUR/USD oscillates around 0.9800 as investors prepare for US employment data

The EUR/USD pair is displaying back-and-forth moves around 0.9800 in the early Tokyo session. The asset has turned sideways in a 0.9780-0.9815 range as the currency domain is developing itself ahead of the US employment data.

Another tumultuous week of trading in asset markets is raising hopes for a peak in the USD and a bottom in precious metals. The Fed note spiked again versus the euro and other troubled foreign currencies on Monday before pulling back sharply mid-week.