The US dollar has been the anchor currency of the international financial systems for decades. It is the currency of the largest economy with the most liquid financial market of the world and therefore there is no way around it. The US Dollar Index is an easy way to observe the development of the US dollar compared to the most important foreign currencies. In this article we talk about the calculation, the correlation to other asset-classes and how to use this knowledge in trading. 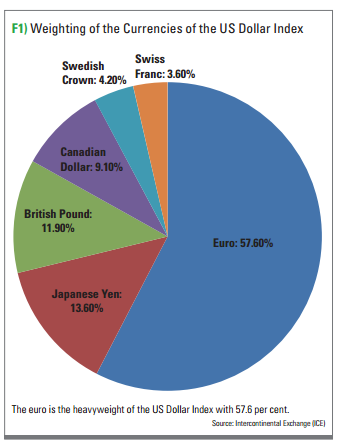 The volume-weighted US Dollar Index – also called “Broad Index” – is an alternative and accurate index, but it is not tradable. The Federal Reserve has calculated it since 1988. Here as well the US currency is compared to a (considerably larger) basket of goods. But the weighting of the currencies depends on the size of the particular volume of import and export. Therefore the Chinese yuan, which is not represented in the US Dollar Index, is the heavy weight beside the euro. However both indices show a similar development. 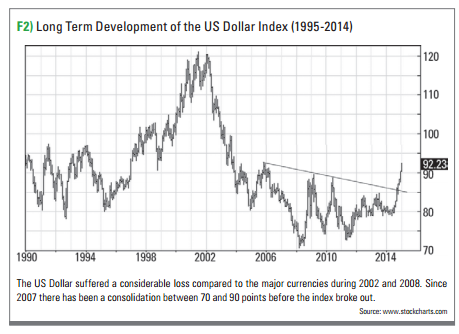 Figure 2 shows the volatile ups and downs of the index during the past decades. The most important milestone of recent history is the bursting of the commodities bubble in 1980. It is mainly attributed to the US dollar forming a bottom and then doubling its value within the following five years. Between 1985 and 1995 the US Dollar Index showed a considerable phase of weakness and then strengthened by 50 per cent until summer of 2001. The expansive policy of the US Fed caused a drop of 72 points at the beginning of 2008. The intensification of the global financial crisis catapulted the index near the 90-point-level within a few months, where it started to build a long consolidation. In late 2014, the index finally started to run upwards again.

The information in TRADERS´ is intended for educational purposes only. It is not meant to recommend, promote or in any way imply the effectiveness of any trading system, strategy or approach. Traders are advised to do their own research and testing to determine the validity of a trading idea. Trading and investing carry a high level of risk. Past performance does not guarantee future results.

USD/JPY witnessed selling for the second successive day and dropped closer to the weekly low. The overnight break through an ascending trend-line and 200-hour SMA favours bearish traders. Mixed technical indicators warrant some caution before confirming a near-term top for the pair.