The concept of buying and selling capital can be initially confusing because you're not buying any asset in exchange for money, like you do in the stock market, for example. Instead, you are simultaneously buying one currency and selling another, that is, doing an exchange.

Currencies are traded in pairs. The pair is written in a particular format, best demonstrated by way of two examples. The Euro and the US Dollar: EUR/USD or the British Pound and the Japanese Yen: GBP/JPY

Every purchase of one currency implies a reciprocal sale of the other currency  and vice versa. This means that buying equals selling - curious isn't it? But the fact is that you are buying and selling the exchange rate, not a single currency.

Imagine if currencies would be traded single and you would want to buy 100 US Dollars. Do you think it would be easy to find someone offering more than 100 Dollars for the same amount? Probably not. The value of a currency does not change in itself, what changes is its value in relation to other currencies. This is a characteristic of a free floating exchange rate system, as you learned in the previous chapter.

If you hear another trader saying "I'm buying the Euro", he/she is expecting that the value of the Euro will rise against the US Dollar and speculates by buying the EUR/USD exchange rate. The trader's ability to anticipate how the exchange rate will move will determine if the trade will represent a win or a loss.

The first member of every pair is known as the "base" currency, and the second member is called the "quote" or "counter" currency. The International Organization for Standardization (ISO) decides which currency is the base and which one is the quote within each pair.

Following the previous example, one US Dollar is worth 1.1440 Swiss Francs.
Therefore, any unrealized profit or loss is always expressed in the quote currency. For example, when selling 1 US Dollar, we are simultaneously buying 1.1440 Swiss francs. Likewise, when buying 1 US Dollar, we are simultaneously selling 1.1440 Swiss francs.
We can also express this equivalence by inverting the USD/CHF exchange rate to derive the CHF/USD rate, that is:
CHF/USD = (1/1.1440) = 0.874
This means that the quote of one Swiss franc is 0.874 US Dollars. Note that CHF has now become the base currency and its value is accrued in USD.
In spot Forex, not all pairs have the US Dollar as the base currency. Primary exceptions to this rule are the British Pound, the Euro and the Australian and New Zealand Dollar.
GBP/USD, EUR/USD, AUD/USD, NZD/USD
When looking at a chart you can see if a currency pair, or in other words, the exchange rate between two currencies, is rising or falling. 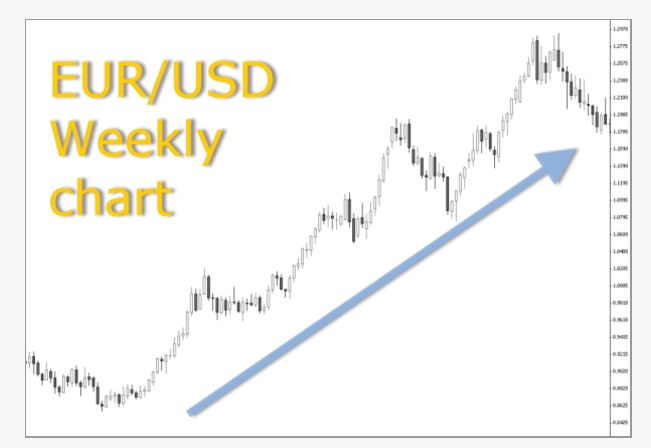 In the above example the chart illustrates the strength of the base currency, the Euro, relative to the quote currency, the US Dollar. Remember, the quote currency is the one in which the exchange rate is quoted.
The next chart shows the same base currency but this time relative to the Australian Dollar. Both charts comprise the same period and as you can see, the value of the Euro has shown a different behavior towards the USD than towards the AUD. 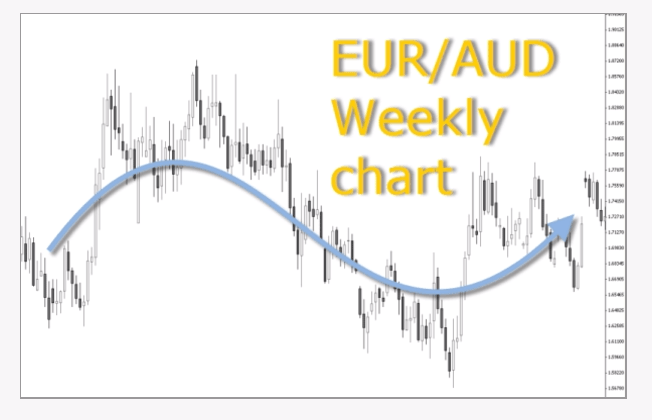 In a free floating system, there are two main factors that can affect exchange rates every day: international trade (import/export of commodities, manufactured goods and services) and capital flows (following certain interest rates, equity performance, government debt instruments like bonds).
It is by buying and selling a currency, therefore exchanging it with other currencies, that it becomes stronger or weaker, independently from the fact of this transaction being speculative or not.
Basically there are two main methods to estimate where a currency is heading: analizing the economic fundamentals and analyzing the price action through technical analysis.
The first refer to the economic and political factors that influence the value of currencies, such as the release of economical data and news. Currencies reflect the performance and policies of entire economies, sovereign governments and industry. It is the comparison of different currencies and their economies that drives exchange rates up and down.
The second are graphical representations of the exchange rates like you see above. Price charts show supply and demand levels represented through price patterns which can be recognized visually. As a numerical sequence, price series can be also technically analyzed using mathematical formulas, represented by technical indicators.

USD/JPY witnessed selling for the second successive day and dropped closer to the weekly low. The overnight break through an ascending trend-line and 200-hour SMA favours bearish traders. Mixed technical indicators warrant some caution before confirming a near-term top for the pair.