What Is The Non Farm Payroll Report?

NFP stands for Non-Farm Payrolls, which refers to a USA data release referring to labour statistics.

NFP is just one of the data releases relating to employment that affects the Forex markets. Labour statistics give an important insight into a country’s economic health, as jobs (and the creation of jobs) are key to a traders’ opinion of the medium to long-term economic outlook for a country.

Employment is the backbone of economic growth – when unemployment levels in a particular country rise, this has an adverse effect on the country’s economic growth. This means that traders will have a dim view of the economic health of the country and will begin to sell its currency, which in turn weakens the currency in relation to others.

Other signs of economic growth are often viewed with a little suspicion by the market if employment figures are not at a healthy level.

Employment figures can also have an impact on interest rates, as higher employment will lead to higher interest rates because of central bank policies aimed at balancing inflation with growth. This is a significant factor for Forex traders, because interest rates are the most important rates when it comes to Forex trading.

For all of these reasons, it is important for traders to keep an eye on employment levels, and one method of doing so is through NFP.

NFP (or Non-Farm Payrolls) is a monthly report researched, recorded and reported by the US Bureau of Labor Statistics on the first Friday of every month. This data release is intended to represent all paid US workers of any business, with the exception of the following:

The report includes estimates of the average working week and the average (weekly) earnings of all non-farm employees. The data in the report typically accounts for about 80% of all US employees, whose labour produces the GDP (Gross Domestic Product) of the US.

NFP is a very significant employment data set because of its central importance to the movement of the currency market, and the US Dollar in particular.

Why Is NFP Data So Important?

The figure is hotly anticipated by traders each month as the figure is seen as key to gauging Fed monetary policy and therefore US Dollar strength. As America is the World’s largest economy and the US Dollar is the global reserve currency the monthly release of the NFP is a focal point of all market participants from independent speculators right through to Investment Banks, Multinational corporations and Central Banks. This level of interest creates two key areas of importance regarding the NFPs:

The battle for positioning heading into the figure can cause skewed trading conditions in the days leading up to the release. Participants looking to establish positions pre-release can cause unexpected directional flows in a currency pair. For example, if markets are expecting a strong number we could see people trying to sell EURUSD ahead of the release expecting USD to strengthen against EUR causing EURUSD to go lower. The volume of this positioning is key. If we see large institutional players positioning then this tends to have a bigger effect on the currency pair than if we are seeing smaller speculative players positioning. The actual size of the positioning itself is also important, if Institutional players are positioning with reduced size it will have less of an impact than if we see them positioning with greater size.

This is where having access to great data-feeds comes in so handy as it’s possible to gauge the level of positioning heading into the figure through analysis of volume tools.

Another situation we can see heading into the figure is large Institutional players reducing positions and taking profit heading into a figure release. For example, if Institutional players are heavily short EURUSD heading into the figure, and they are expecting a weak NFP result, we typically see them reducing position size heading into the result so that they don’t suffer large negative equity swings on the results (if the result is as they anticipated). Often times the reaction to the figure will only cause a brief but sometimes large spike in the price of a currency pair and so a reduction in position size allows the Institutional players to maintain their overall (long-term) position, looking for the market to correct when the news has been digested and the longer term fundamental picture restores balance to the market and they see a resumption of their anticipated directional bias in the currency pair.

This reduction in position size heading into a figure release can itself cause a spike in the price of a currency pair, referred to as a squeeze, and is often accompanied by speculator action which can extend the moves even more. So for example we may see EURUSD weaker in the days heading into the NFP release but in the hours beforehand as positioning on shorts is reduced, we see price rising. We then see speculators “piggy-backing” the move which drives the spike even further.

Below is an example. 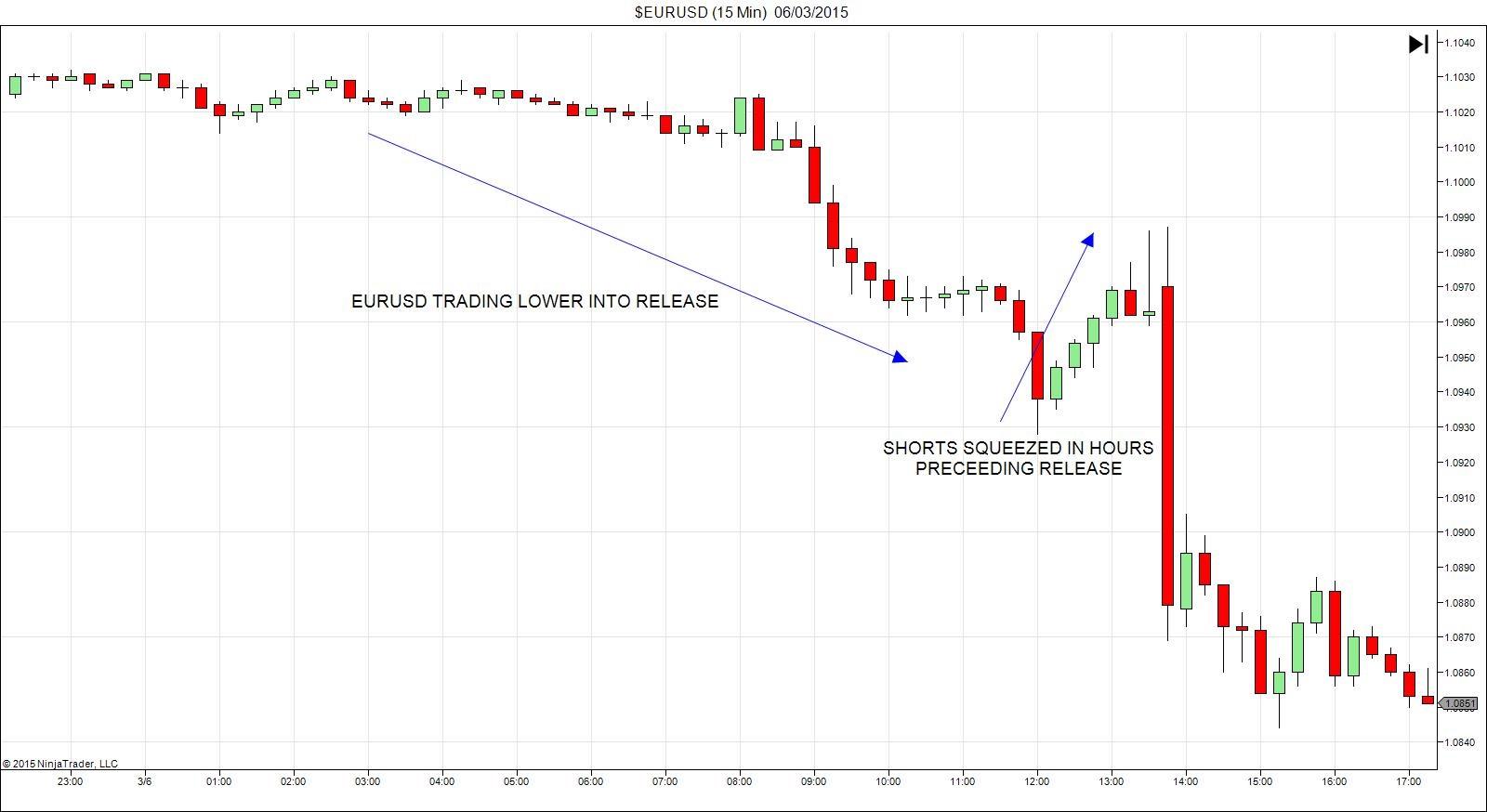 Here we can see, exactly as discussed above, a situation where EURUSD is trending downward heading into the figure release but suffers a sharp squeeze hours before hand, only to return to trending downward post release.

This type of action can create choppy and difficult trading conditions for beginner traders who aren’t aware of what is likely to be going on behind the scenes to cause thee moves and this is where having great Order Flow understanding and Order Flow tools can really help to keep you out of trouble in these conditions.

All comments, charts and analysis on this website are purely provided to demonstrate our own personal thoughts and views of the market and should in no way be treated as recommendations or advice. Please do not trade based solely on any information provided within this site, always do your own analysis.