If you like to plan your trades, having a global overview of what’s going on in the market at any time is always a good idea. In order to get that overview, technical analysts usually go through Elliott Wave analysis. This is probably one of the most complex tools in technical analysis, so it can be difficult to understand initially, but once you master the technique, the benefits will far outweigh the risks. Anyway, at the end of this article, we will provide an example of its application so you can get the idea of how to use it.

First things first: who invented this technique? It wasn’t the main character of Mr. Robot but Ralph Nelson Elliott, an American accountant who worked in Central America in the 1920s. While he was there, Elliott contracted an intestinal disease so he had to abandon his professional career and, in order to distract his mind, he decided to study the behavior of stock prices.

In 1934, Elliott discovered that price action displayed on charts, instead of behaving in a somewhat chaotic manner, actually had an intrinsic narrative attached. Elliott saw the same patterns formed in repetitive cycles. These cycles were reflecting the predominant emotions of investors and traders in upward and downward swings. These movements were divided into what he called "waves".

According to his observations, a trending market moves in a five-three wave pattern, where the first five waves, labeled by numbers, move in the direction of the larger trend. Following the completion of the five waves in one direction, a larger corrective move takes place in three consecutive waves. Letters (a, b and c) are used instead of numbers to label this corrective pattern.

This is how a five wave motive and a corrective phase pattern look like. 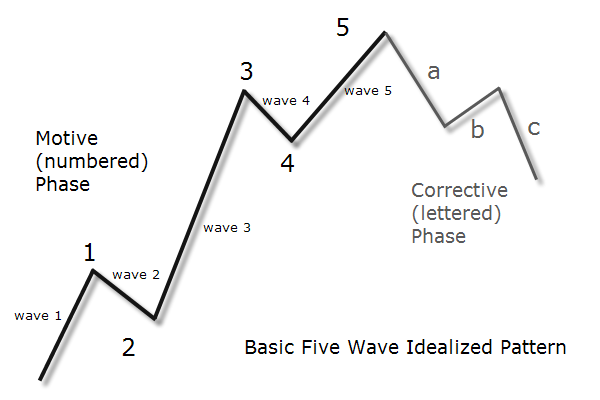 The patterns identified by Elliott occur across multiple time frames. That means that a completed five wave sequence on a small time frame, let's say, a 15-minute chart, may represent just the first wave of a larger sequence unfolding on a 60-minute chart, and so forth. In a macro sense, each unfolding wave pattern is part of a bigger wave pattern unfolded in the higher chart. 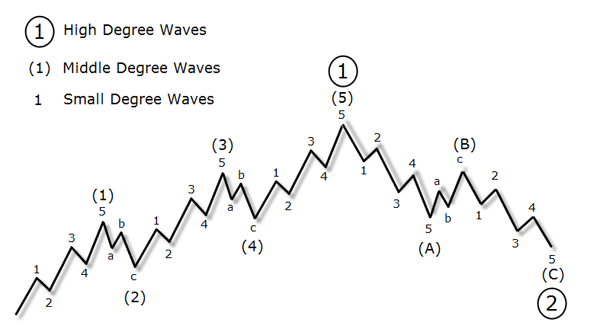 Probably after reading the above paragraphs, they have reminded you of a concept called fractals! That is, Elliott implicitly defined what was a fractal almost 50 years before Mandelbrot even coined the name.

Now that we have some clear understanding of what Elliott waves are, our main goal will be to take advantage of them to trade cryptocurrencies and make money. As you can imagine, identifying and labeling correctly the waves it’s a difficult task: when looking at real charts, the waves aren’t shaped perfectly and sometimes it's difficult to label them. Therefore it requires a lot of practice to master this technique but, fortunately, Elliott left some rules to help us:

In the following figure, you can find depicted the wave formations disallowed by the above rules: 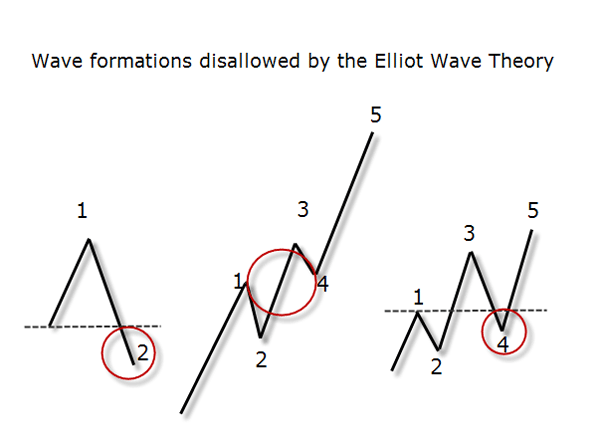 Besides the above rules, there are more variations which make the Elliott wave theory a little bit more tricky. We will cover here the most basic forms, but there are a lot of them that you can find in the excellent book Elliott Wave Principle: Key to Market Behavior written by Frost and Prechter. 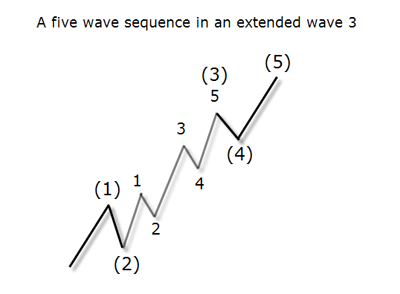 The first variation that will be covered here is called extensions. An extension is an elongated movement in the direction of the main trend which may appear in one of the impulse waves, that is, in waves 1, 3 or 5. An ideal example of an extension can be found in the following chart:

Another variation of impulse waves are diagonals, which consist of five waves and occur at the end of a strong trend, especially when wave 3 has moved extensively in a short time. Diagonal waves can also be found in wave c of the correcting sequence, indicating the termination of the movement on a higher degree. 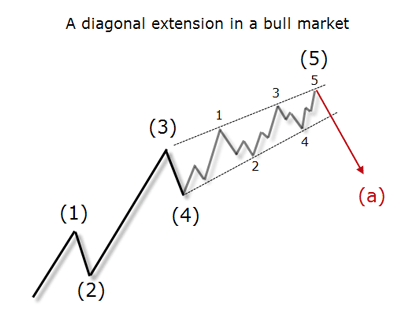 This formation is usually a wedge-like pattern, formed by two converging lines, as we can see in the following example:

Note that each one of the last five waves consists of three minor waves and not five waves as the usual structure. In a diagonal, wave 4 can overlap wave 1 in contrast to the basic rule. In these patterns, wave 5 tends to overshoot (or undershoot) the border trendline. 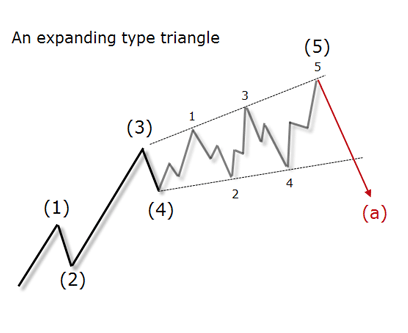 Finally, we have the expanding triangle formation. In this case, wave 5 fails to exceed the peak of wave 3, producing what is called a “5th wave failure” (see the figure below). This kind of pattern is usually a sign that a bottom or a top is in place and that the market will reverse against the current trend.

While the Elliott Wave Theory can provide the form and structure of price movements, many analysts combine these principles with the Fibonacci ratios in order to measure the potential of each price move including their probable time duration. But first, let me explain how those ratios are calculated.

Fibonacci ratios are obtained by dividing different numbers in the Fibonacci sequence as follows:

Using Elliott Wave in Your Cryptotrading

Ok, now that we have the concepts, let’s apply them in the market to improve our trading in cryptocurrencies and find opportunities with the best risk/reward ratio. Take a look at the following EOS/USD 30-minutes chart:

As you can see, there’s a short-term upward trend divided into 5 waves. We have labeled the start of every wave, and also we have drawn lines connecting the starting and ending points of every wave. Let’s see if this waves structure is compliant with the rules we have just defined:

Wave 3 is usually the longest of the whole sequence and it always completes beyond the peak of wave 1.

What about Fibonacci? Let’s add some retracements to wave 1:

Not clear yet? Let’s take a look to another example: in the following 4 hours chart we can see that Monero is in motive phase, with 5 waves pushing its price higher:

Can we still take advantage of that big wave 3? Sure, just draw its Fibonacci retracements:

Elliott wave theory provides a complete framework to understand market behavior, helping to organize our opinion about the market by finding an answer to the question “where are we now?”. Combining the wave theory with Fibonacci ratios help traders to take decisions, providing some nice entry and exit points, thus increasing their confidence.

On the other hand, the main flaw of Elliott wave theory is its high degree of subjectivity. It is hard to find two Elliott wave analysts that reach the same conclusions or draw the same wave patterns.

To sum up, Elliott wave analysis is an excellent way to provide context when analyzing the market, although I would not recommend trading exclusively using just wave analysis. Instead, try to use other tools such as moving averages or oscillators to take the final decision of buying or selling a cryptocurrency.

The information provided by FXStreet does not constitute investment or trading advice and should be just treated for informational purposes. Our content may also include affiliate links or advertising from other websites, however we are not responsible or liable for any actions of other websites. Investing in Cryptocurrencies involves a great deal of risk, including the loss of all your investment, as well as emotional distress.