In a first for the physical art market, Sotheby’s said today it would accept BTC and ETH as payment for Banksy’s iconic artwork “Love is in the Air,” marking a new height for mainstream acceptance of cryptocurrencies and a sign of an enterprise evolving to attract new collectors. The work is estimated to fetch between $3 million to $5 million.

With the growing adoption of digital art and NFTs, along with our increased focus on digital innovation, we’ve seen an increasing appetite among collectors for more seamless payment options when doing business with Sotheby’s. 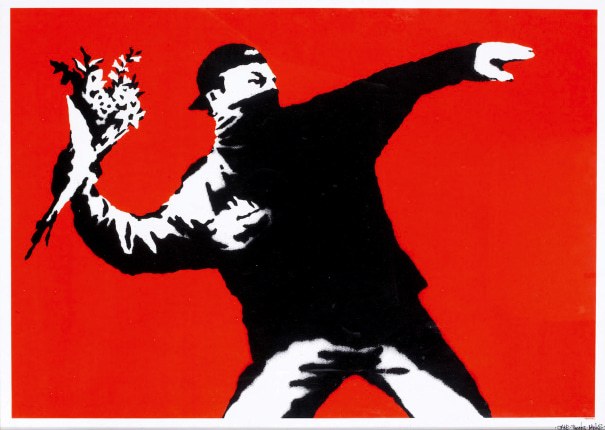 Bansky's "Love is in the Air"

To facilitate the expansion into cryptocurrency payments, the auction house is collaborating with cryptocurrency exchange Coinbase Global Inc. for the sale. The new payment solution is expected to be a catalyst for further adoption of cryptocurrencies across Sotheby’s auctions. Stefan Pepe, Sotheby’s Chief Technology Officer, described the partnership as “a natural  progression.”

The index series includes the S&P Bitcoin Index, the S&P Ethereum Index and the S&P Cryptocurrency MegaCap Index, which measures the performance of Bitcoin and Ethereum digital assets.

The new series will make it easier for investors to access and assess the cryptocurrency market and provide a tool to reduce the inherent volatility in the highly speculative assets.

The Digital Market Indices will make it easier for investors to access and assess this emerging technology-driven asset class while potentially mitigating some of the common risks associated with this traditionally speculative market.

Greg Fleming from Rockefeller Capital Management today highlighted the need for reliable and transparent benchmarks backed by quality pricing data because cryptocurrencies are “probably something that is more secular in nature though - digital currencies are going to be part of the future.”

S&P Dow Jones Indices will be adding to the Digital Market Indice series later this year that will include additional coins and broader-based indices such as large-cap and broad market benchmarks.

Bitcoin price rebound not attracting a new wave of believers

On April 30, Bitcoin price broke the neckline of an inverse head-and-shoulders pattern and cleared the 50-day simple moving average (SMA). Since then, BTC has rested on the moving average, unable to garner further price traction. As a result, the bellwether cryptocurrency has declined below the moving average and neckline. 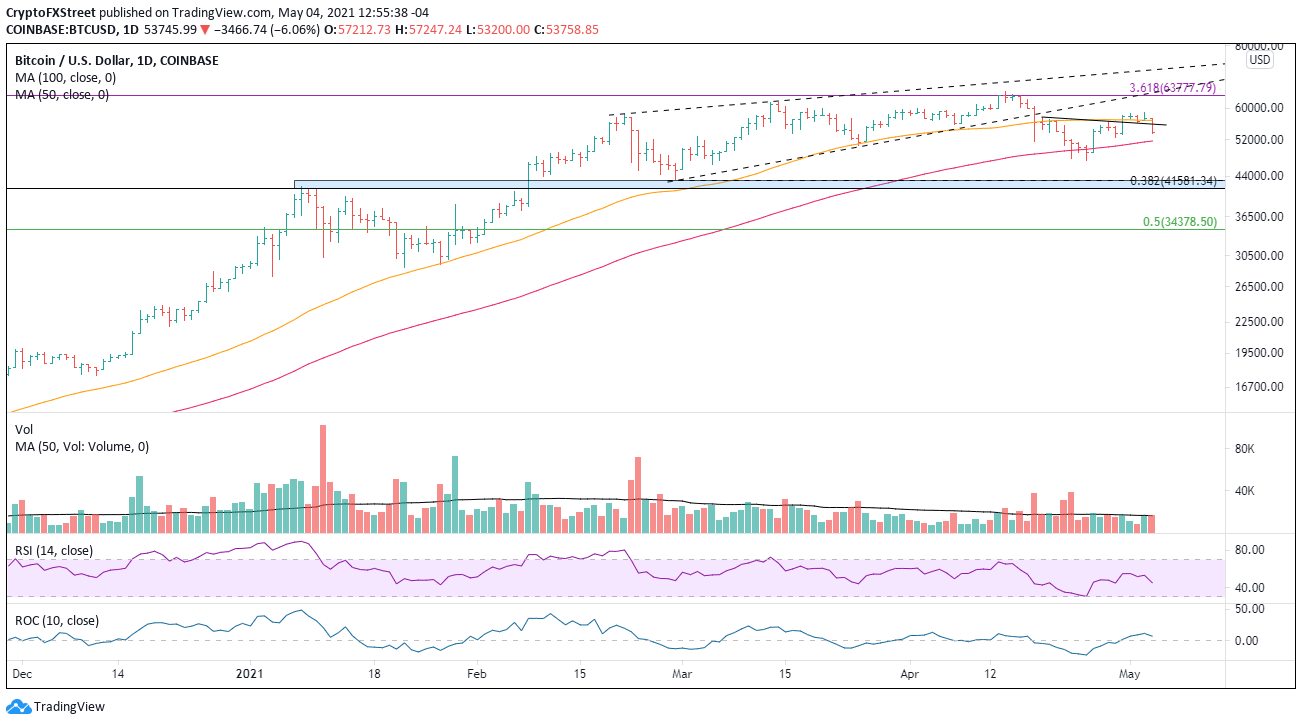 Speculators need to be alert for a bear trap, where Bitcoin price slightly undercuts the right shoulder and forcefully rebounds. A resumption of the rally from the April low will find challenging resistance at the intersection of the 361.8% Fibonacci extension of the 2017-2018 bear market at $63,777 with the wedge’s lower trend line at $64,800.

Ethereum price enthusiasm is unmatched in the cryptocurrency complex

Adding to the greater probability of a high this week is that Ethereum price neared the 261.8% Fibonacci extension of the 2018 bear market at $3,587 this morning. 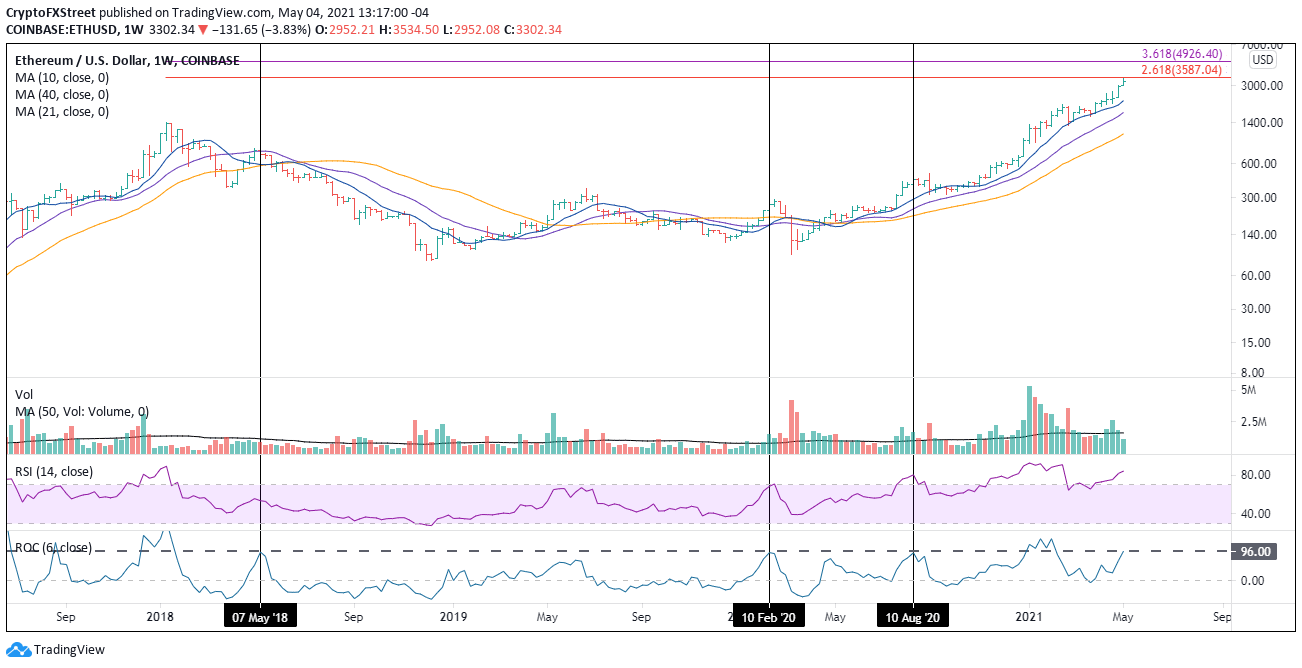 A pause for the Ethereum price advance will find heavy support at the 21-day SMA at $2,581.

After rallying 180% in April, 50% for the week and 13% one day, it is no coincidence that speculators are taking profits this week, but the longer-term bullish outlook remains active.

Resistance is anticipated to unfold at the 78.6% Fibonacci retracement of the April decline at $1.73, about 10% above the current price. Ripple enthusiasts are fixated on the psychologically important $2.00 and the 61.8% retracement of the 2018-2020 bear market at $2.08. The XRP price oscillations around $1.00 in early April propose that $2.00 could be imposing.

The measured move target of the inverse head-and-shoulders pattern is $2.47, a gain of 70% from the neckline position on April 29 and nearly 60% from the current XRP price. Aggressive speculators should look to the 78.6% retracement of the 2018-2020 bear market at $1.62 as the ultimate resistance. 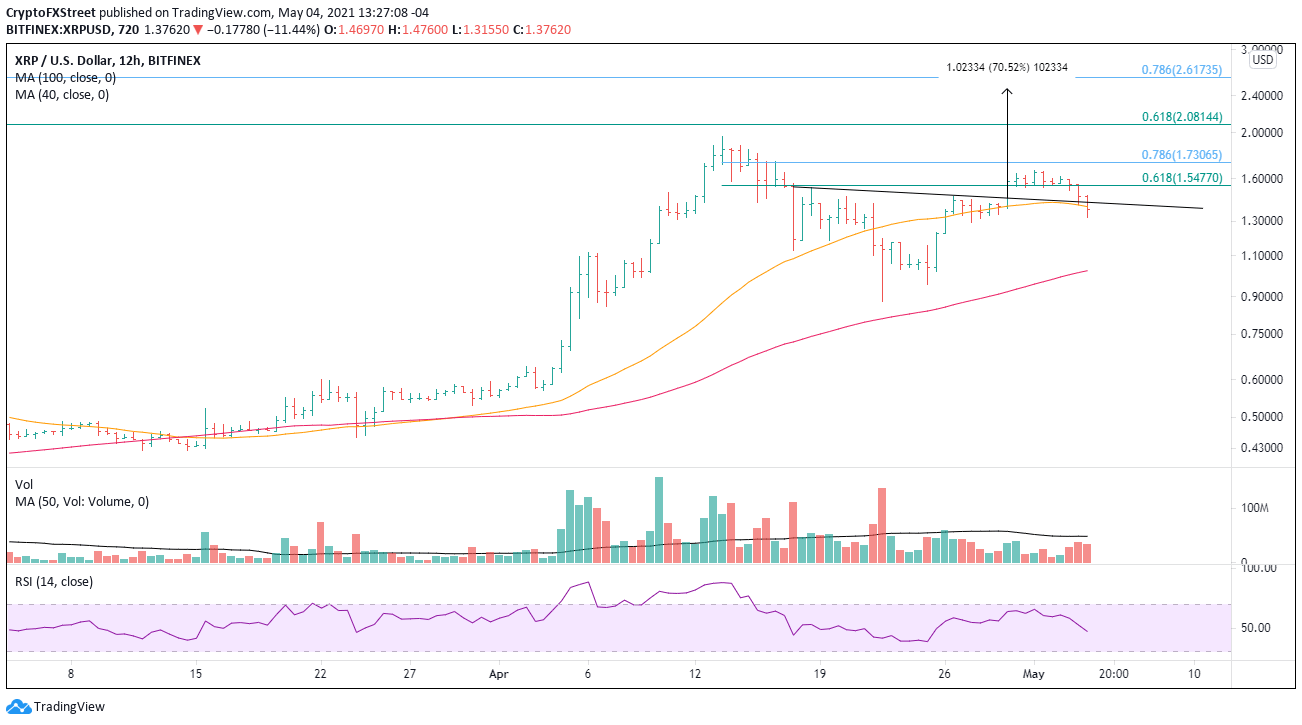 A decline below the right shoulder at $1.28 would invalidate the inverse head-and-shoulders bottom and expose XRP price to decline to $1.16 and potentially $1.00.