The whole cryptocurrency space contained losses for now as Meta earnings issued a warning and rattled the Nasdaq index with losses in the ASIA PAC and European session. These negative headwinds spill over to cryptocurrencies facing several casualties on the board with red numbers for all major pairs. Expect a possible continuation as more downside risks loom, with the second and third biggest central banks coming out this afternoon with their rate decisions.

Bitcoin (BTC) price is already giving back half its earnings from the past ten trading days, making investors very nervous. It comes as no surprise then that the Relative Strength Index (RSI) is taking a nosedive and is barely hitting the oversold level. This will leave investors unhappy and might see more funds being extradited from the cryptocurrency space after Meta earnings delivered a blow to global market sentiment.

BTC price slipped below $36,709, a critical level, on January 22 before clawing back gains. As both the short-term trend line and that critical support level have been breached, expect more downside to come as long as the Nasdaq keeps printing red numbers going into the US close later this evening. Not much in the way between now and $34,000, which would suggest anything other than that price action has created a flag-formation with more downside pressure to come. 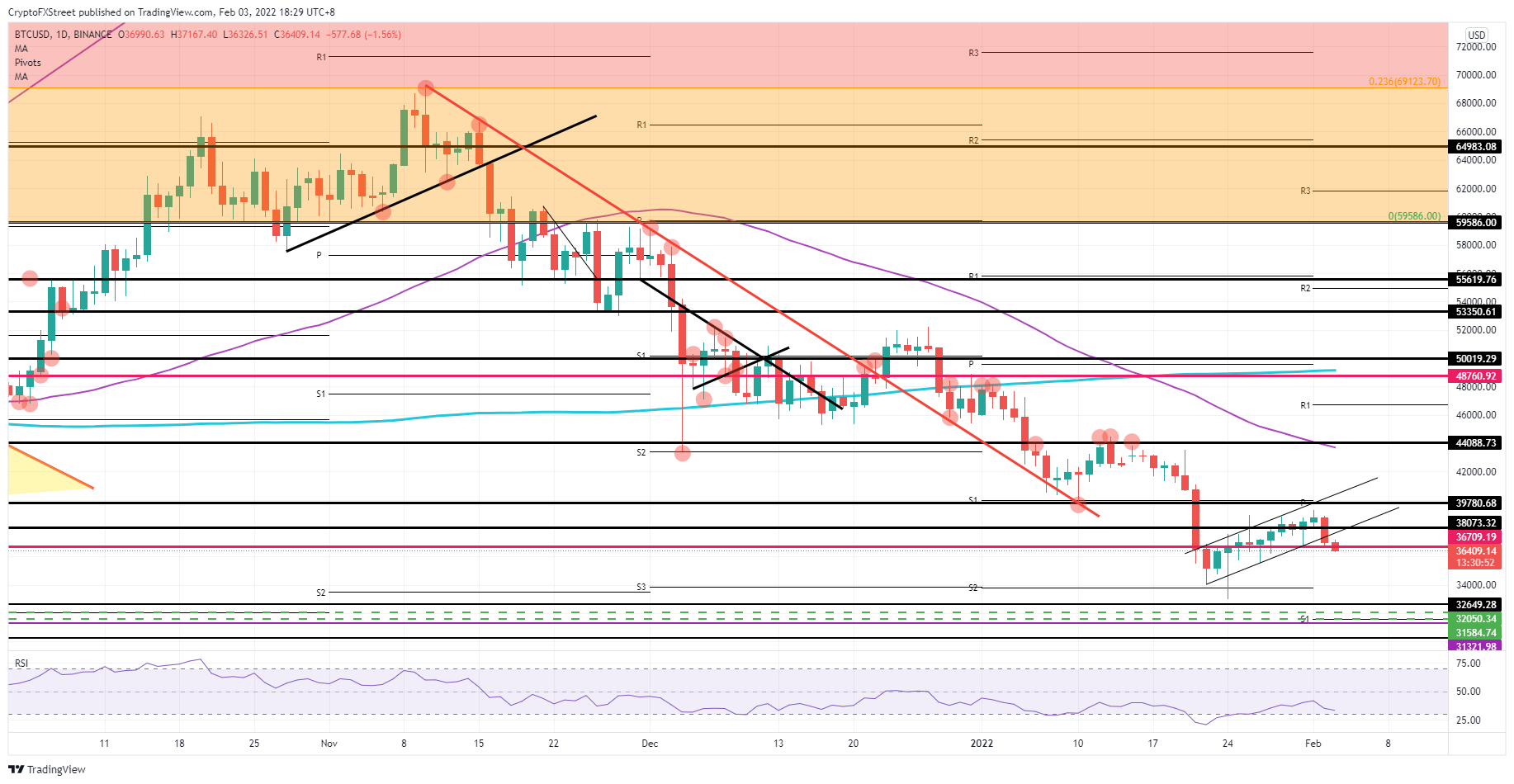 As mentioned in the introduction, with two major central banks issuing their policy guidance today, Bitcoin bulls may be gifted a safe ticket out of the Meta massacre. If the ECB, for example, commits to keeping its quantitative easing going, this could be very supportive for markets and see a quick turnaround in sentiment. BTC price would be lifted back up towards $38,073 in no time, setting bulls back on track to hit $39,780.

Ethereum (ETH) price is in a similar pattern as Bitcoin. Going into the close yesterday, the flag setup still held, but with the break below and rejection this morning, at $2,695, the stage is set for ETH to slip further. As the low of yesterday has already been taken out, the chance of forming a bear trap becomes slimmer by the minute. As Nasdaq's negativeness weighs on trading sentiment, do not expect bulls to quickly join the scene and try to catch the falling price action.

ETH price will want to dip further first before bulls engage. Here the more significant issue at hand is that the RSI still has some more room to go before hitting the oversold area. This could be translated into ETH price reaching $2,326 or even $2,278 before bulls want to re-engage, buying back in to Ethereum coins. These levels will be crucial as the monthly S1 support is at $1,928, below the $2,000 and could hold 26% of devaluation if ETH dips towards that bottom. 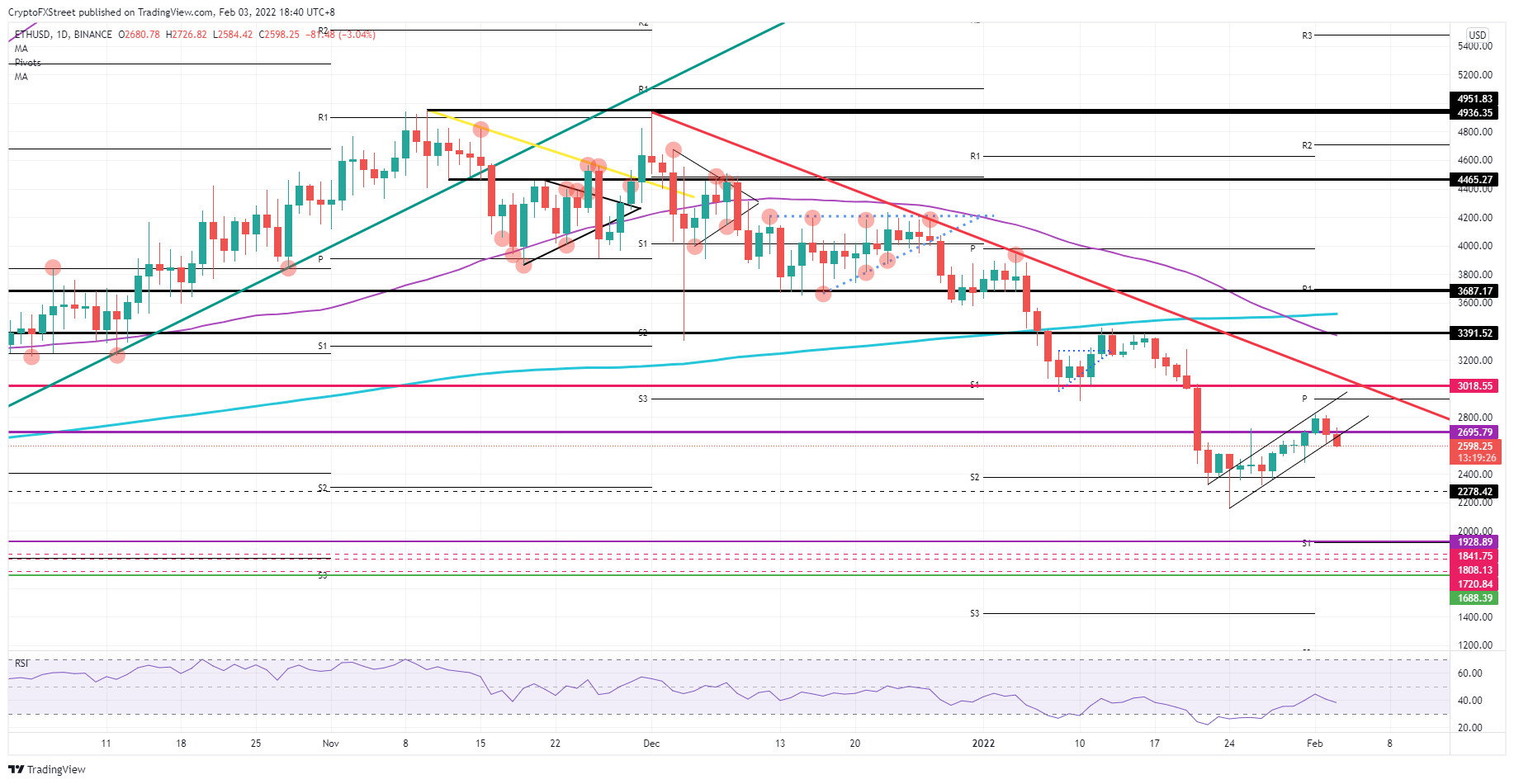 Many things can change in just one trading day, depending on sentiment. Losses, for now, look relatively contained, once the US session is under full speed, it could easily be that investors start to pick up Nasdaq and Meta stock at these discounts, and US indices could be set for a close in the green. With that, investors will want to buy some more risk assets, such as cryptocurrencies, which could see ETH prices return to above $2,695. From there, Ethereum bulls can continue their ascent and reset the target for $3,018 by the end of this week.

XRP price risks of slipping out of the pennant, for a bearish breakout towards $0.55

Ripple (XRP) has contained its losses the most from a purely technical trading perspective. Where Bitcoin and Ethereum have breached essential supporting elements, the pennant price action in XRP still looks still in good shape and is holding things together. Even a short dip would not be alarming as $0.58 is just around the corner to support any further slippage out of the pennant. It must be underlined that that same level has been breached on a few past occasions in recent days and could lose its importance, which could set the stage for a full retest of $0.55. 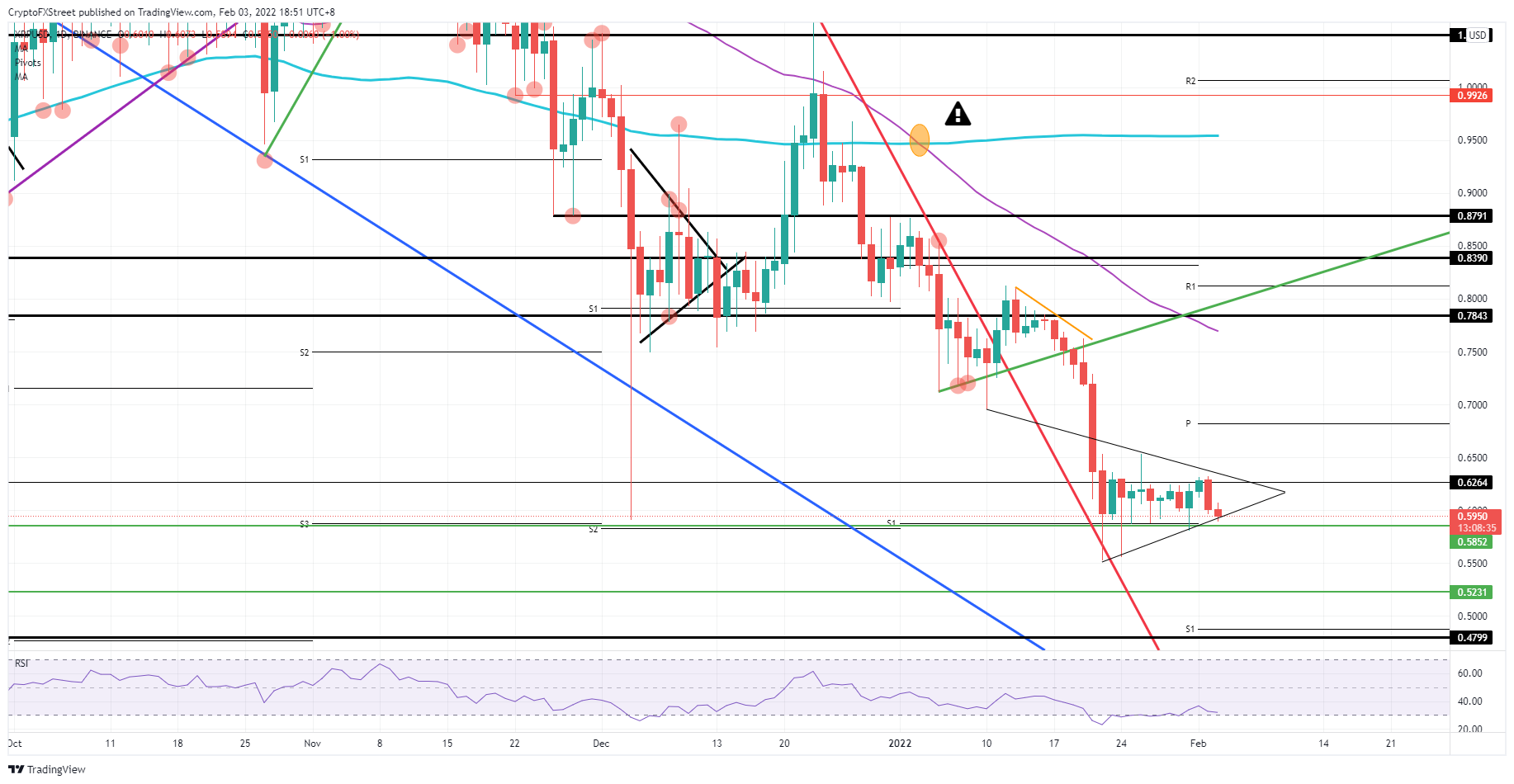 With the RSI back into oversold and the death cross further gaping open, a pause or short retrace looks more than justified. A bounce of the ascending side of the pennant could spark a bullish uptick as bears have no significant incentive to stay much longer in their short positions. With that, a bullish breakout would see a lift towards $0.70 by the end of this week.