The recent activity in the markets proves that there really never is a dull moment in crypto. Just when the Bitcoin community was bemoaning its lack of volatility as the number-one cryptocurrency was locked in a dull trading range for the last two months, it soared by over 20% in just five days. And that's nothing compared to ETH, whose breakout has already registered staggering gains of more than 30% during the same period.

Bitcoin's currently posting YTD returns of over 50% while ETH YTD returns are eyewatering, at more than 150% today. The rally on ETH doesn't appear to be stopping either despite a slight breather on Tuesday and a correction on many major DeFi tokens including LINK, COMP and LEND over the weekend. So, what's going on?

Ethereum Is Back in Business

With 150% YTD gains, it's pretty clear that Ethereum is back in business. Sure, its 2020 growth hasn't been in a straight line, we're talking about volatile assets after all. Ether was also hit hard by the March selloff dipping below $90. But it has shown incredible price resilience with a culmination of factors driving its demand.

The main trigger, of course, is the upcoming switch to ETH 2.0 which will pivot Ethereum from a Proof of Work blockchain to Proof of Stake. This is a huge driving force for ETH demand especially for those bullish on Ethereum since the new blockchain will allow for staking, thus incentivizing ETH holders to use their stakes for ETH rewards.

Added to the long-awaited switch to PoS enabling widescale mainstream decentralized applications, at last, is the burgeoning DeFi space in which Ethereum provides the backbone for most of its participants. Since hitting its $1-billion-record of locked value in DeFi platforms in February just before the market crash; today that number has soared to $3.7 billion today.

DeFi projects and tokens have been reminiscent of the ICO boom with some coins experiencing wild gains of more than 1000% since launch and others rising by more than 400% in just the past three months. All this hype surrounding DeFi has further fueled Ethereum's rise in price, along with Ether spot trading and derivatives, and DEX trading volume increasing as well.

A Surge in Demand for ETH Options and Futures

Despite a time when trading volume on the spot market has been at a low largely thanks to Bitcoin's lack of volatility, ETH has been showing new highs. And the momentum is gaining in the futures and options markets as well. All major derivatives exchanges have seen a surge in demand for ETH futures trading in the last month with OKEx leading the way on Monday at $2.3 billion according to data from Skew. 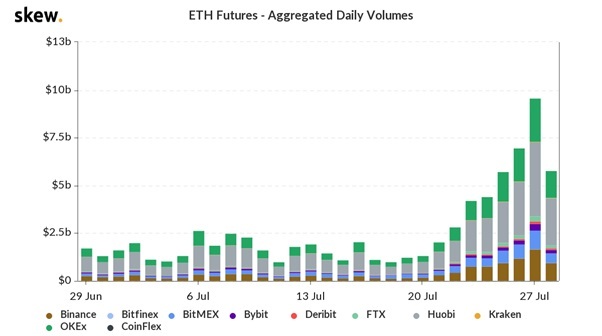 Since the beginning of the second quarter of this year, the ETH options market has continued to gain momentum in terms of volume and open interest. While Deribit still accounts for the lion's share of the ETH options market, OKEx is gaining ground and is also seeing massive surges here, fueling ETH's price rally further. 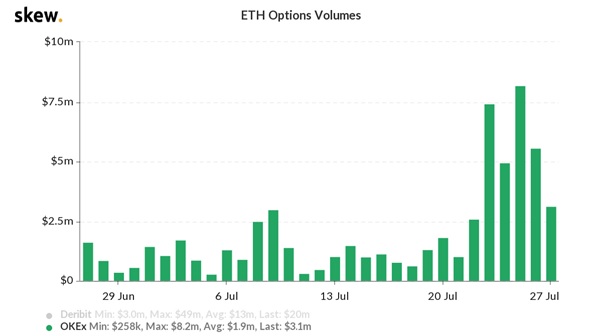 With so many fluctuations in altcoins and sensitive markets susceptible to huge gains and losses, it's too early to tell whether the alt season is coming to an end or if this bull market is just getting started. Price pullbacks of many of the major DeFi tokens over the weekend may be discouraging for many but it pays to recall that corrections are frequent and necessary occurrences. It's unlikely that the DeFi craze is slowing down. In fact, losses posted by Maker, Comp, and Aave on Monday have already begun to recover.

Even if the DeFi bubble were to burst, it seems that it cannot quell the enthusiasm for ETH. In actual fact, it may bolster its price further as the capital flows from DeFi tokens back into ETH.

It's certainly looking like the good times are back for the blockchain project dogged by scaling issues and skepticism. And now that its developers have announced the launch of its final testnet Medalla before the mainnet launch, anticipation looks likely to continue to grow as we close in on the end of the year.