A whistleblower from the Terra community forum, FatManTerra, has unearthed Do Kwon's 42 million LUNA tokens, hidden in a shadow wallet. According to FatManTerra, the CEO of Terraform Labs kept lying to the community by assuring that the new Terra chain would be community-owned and that the organization holds zero LUNA tokens.

Also read: LUNA 2.0 price recovers as Do Kwon may not go to prison

Do Kwon's shadow wallet holds $200 million worth of LUNA

Do Kwon, the CEO and co-founder of Terraform Labs, offered a revival plan for the rebirth of Terra after the colossal crash of sister tokens LUNA Classic (formerly LUNA) and TerraUSD (UST). Kwon assured the Terra community that Terraform Labs holds zero LUNA tokens, and the new chain would be entirely driven and owned by the community.

These statements have been contradicted by Terra community whistleblowers, though. Do Kwon apparently held 42 million LUNA tokens worth $200 million in shadow wallets. "FatManTerra," an anonymous user who emerged after the UST de-peg and crash wiped out $40 billion in market value from the crypto ecosystem, has identified the following wallets as Terraform Labs wallets or shadow wallets controlled by Do Kwon:

All these wallets currently hold LUNA tokens that are either vested or airdropped, unlocked at genesis. Therefore, despite assuring the community that Terraform Labs wallets will be removed from the whitelist, Do Kwon managed to keep it and receive vested and unlocked LUNA in these addresses. 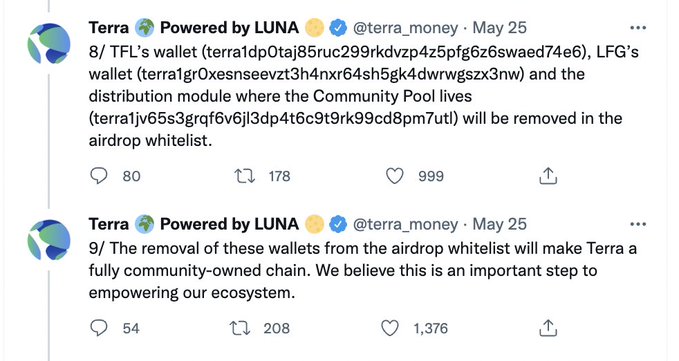 FatMan told the community that these wallets are just the verified ones, and that there are many others. He revealed that Do Kwon used his shadow wallet to approve his proposal and manipulate Terra's governance through Terraform Labs is not supposed to vote.

The whistleblower acknowledged the importance of facts and symmetric information for investors in the crypto ecosystem and warned LUNA holders, asking them to exercise caution.

Do Kwon manipulates Terra holders that LUNA 2.0 is "community-owned"

Kwon has been accused of manipulating the new Terra chain's governance on several occasions. Recently verified validators, part of the "war room" instituted after the colossal LUNA-UST crash, confirmed Do Kwon and Terraform Labs had a hands-off approach to the rebirth of Terra and recovering the lost worth of validators and investors.

FatMan considers Kwon's affirmation that the new Terra LUNA 2.0 chain is community-owned an outright lie, as the new facts shed light on the CEO's control of the project.

In the investing landscape, it's important that retail receives symmetric information, so understand the facts and make of this what you will. Exercise caution and know what you are buying. These people have no moral fibre. They will lie for money at every possible turn. (4/6)

Best performing cryptocurrencies of the week

Cryptocurrency analysts at FXStreet have identified the best-performing cryptocurrencies of the week. WAVES, OGN and HNT, are the three assets that made it to the list. For more information on their price-performance and trends, watch this video: