LUNA 2.0 price started its recovery after the bloodbath as Korean authorities revealed prison time may be unlikely for Do Kwon. The Terraform Labs CEO could instead be hit by fines and penalties from regulators and lawsuits from investors, on account of the colossal UST and LUNC (previously LUNA) crash.

Also read: These are the top investors that remain bullish on Terra’s LUNA 2.0 price

LUNA 2.0 price has bounced back, posting over 3% gains overnight. Since its debut on May 28, LUNA price witnessed wild swings across exchange platforms Kraken, OKX and Binance. Despite the volatility in LUNA 2.0 price, the new Terra token has started its recovery.

The volatility in Terra’s new token and the lack of liquidity were the two key factors driving LUNA price lower. However, LUNA 2.0 is on track to recover.

@FatManTerra, a whistleblower from the Terra community forum recently told his 62,600 followers,

Feel free to make money on LUNA 2 - I have a bunch of LUNA 2 - I'm not stopping you - all I'm doing is posting information about the Terra project that I believe the public (and investigators) deserve to know.

The whistleblower holds the new Terra token and believes in LUNA 2.0, while raising questions and concerns on the colossal crash of TerraUSD (UST) and LUNC (previously LUNA).

Do Kwon may not face jail time, hit by penalties

The Terra community demanded prison time for Do Kwon, after UST’s de-peg and the crash of sister tokens LUNA and TerraUSD. Discord and Reddit forums were filled with outrage from LUNC and UST holders asking for justice and jail time for Do Kwon.

South Korean authorities have continued their investigation into Do Kwon’s activities. The 30-year-old South Korean was the founder of the algorithmic stablecoin project that imploded and wiped out nearly $40 billion in market value.

In the United States, Federal prosecutors and ex-senior counsel for the Securities & Exchange Commission told CNBC that it may be challenging to press criminal charges on Do Kwon. Proving intent to defraud is a challenge, however, Do Kwon is likely to face civil penalties, fines from regulators and authorities and lawsuits from investors. The collapse of UST was Kwon’s second failed attempt at launching an algorithmic stablecoin, his first attempt resulted in losses in the range of tens of millions of dollars, in Basis Cash.

Do Kwon could be hit by penalties like injunctions, disgorgement (returning gains), or fines based on the amount of the loss. This could imply Kwon pays fines in tens of billions of dollars that were wiped out in the de-peg and the market crash that followed. Kwon has a complicated history with the US SEC as the Terraform Labs CEO has dodged a few subpoenas and filed a motion opposing the regulatory body.

While experts argue that success of LUNA 2.0 means there is a chance for institutional and retail investors to recoup their losses, there was no backstop from the Federal Deposit Insurance Corporation (FDIC). The only chance at redemption for holders of LUNC and UST is LUNA 2.0 airdrop.

Jump Crypto finally completed the ongoing investigation in the UST de-peg and revealed insights of the crash. Retail investors were left holding massive bags of UST while large depositors and Terraform Labs withdrew liquidity from the UST/3CRV pool on May 7. 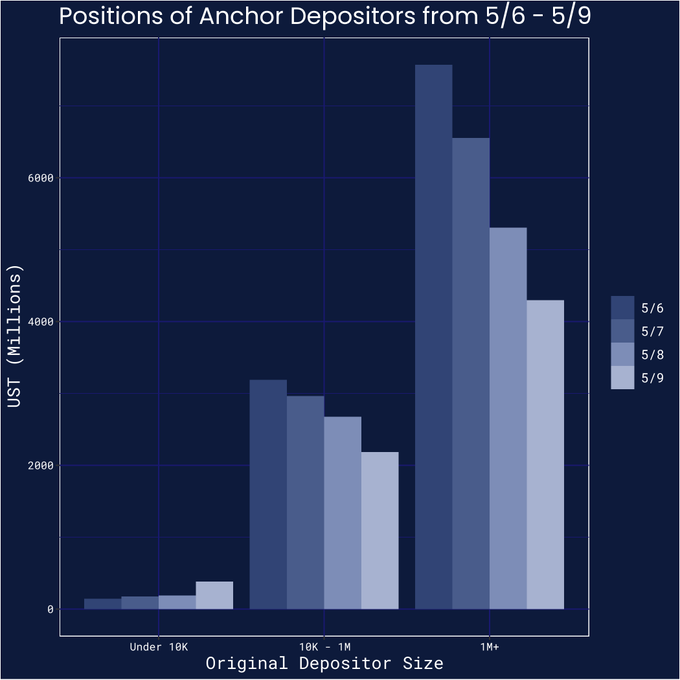 Positions of Anchor Depositors from 5/6 to 5/9

Quinten Francois, a crypto investor and advisor, turned to Twitter to ask his 78,500 followers if Terra has a chance of regaining trust and becoming a success after LUNA 2.0 crossed nearly $7 billion in fully diluted valuation. Nearly 69% respondents believe it is unlikely for Terra to regain trust in the crypto community with LUNA 2.0.

Cryptocurrency analysts at PUMPMaps have evaluated the LUNA 2.0 price trend and noted that the token has broken the triangle up. LUNA 2.0 price is forming a rising channel. Terra price may correct from the upper border of the channel, it is likely to continue its uptrend.

Akash Girimath, leading cryptocurrency analyst at FXStreet, believes it is a good bet to buy LUNA 2.0 token after its airdrop. For more information on LUNA 2.0 bullish potential watch this video: