Swipe (SXP) is one of the worst-performing tokens out of top-100. The coin has lost nearly 15% of its value in the last 24 hours to trade at $1.28. The coin peaked at $5 on August 13 and has been moving down steadily ever since, losing over 70%. SXP is ranked 99 on Coinmarketcap with the current market capitalization of $97 million and an averaged daily trading volume of 86 million. The token is most actively traded on Binance.

SXP/USD has been sliding down with no particular fundamental reasons, influenced mostly by technical and speculative factors. The price bumped into a brick wall created by a combination of the downside trendline from August 13 high, middle line 12-hour Bollinger Band, and SMA1100 on approach to $1.60. This barrier may be a hard nut to crack for the bulls and may limit the recovery attempts. 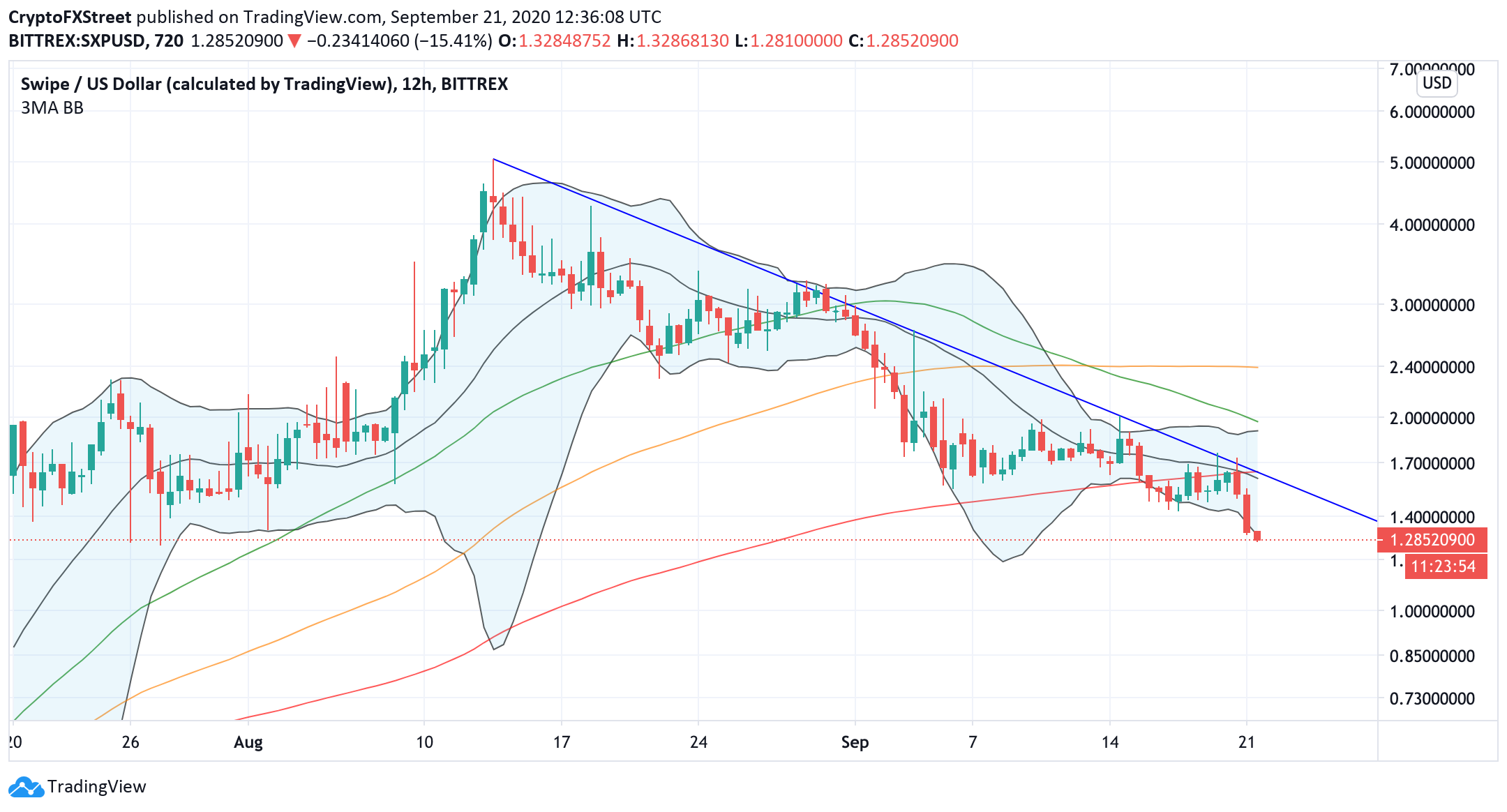 Meanwhile, on the downside, SXP moved below the lower line of the 12-hour Bollinger Band, meaning that the bearish momentum may be gaining traction. The local support comes at $1.25 while a daily close below this area will increase the selling pressure and bring $1.00 into focus, as previously reported by FXStreet.

On-chain metrics support the bearish story at this stage. Thus, IntoTheBlock's "In/Out of the Money Around Price" (IOMAP) model puts a large emphasis on the $1.46 area that may prevent the token from a sustainable recovery.

The transaction history shows that five whale addresses holding nearly 60 million tokens have their breakeven point on the approach to $1.46. This area has the potential to absorb the buying pressure, preventing SXP from going higher.

That said, if this resistance level breaks, then the bulls will definitely regain control over the situation as the price won't meet much of the resistance until over $2.00. If the $1.46 resistance were to break, SXP holders should expect their investments to surge by at least 35%.

On the other hand, the IOMAP cohorts model shows that SXP will not face any substantial barriers on the move to the North, making in the path of the least resistance. If the worst-case scenario plays out, the sell-off may be easily extended to the above-mentioned $1.25 and $1.0 before the buyers pop in again.

On the bright side of things, the number of SXP whales doubled in less than two weeks. Thus the number of wallets holding over 1 million coins increased from 5 to 10, meaning that large investors were inclined to buy on the dip. The whales' activity is often regarded as a leading indicator for the broader market. If this is the case, we can expect that SXP/USD bullish momentum will gain traction.

To conclude: SXP is poised for the further decline with the local target at $1.25, followed by $1.00. The sell-off may quickly gain traction as there are no supply barriers on the way down. On the other hand, the recovery will bump into a formidable resistance in the area of $1.40-1.60 created by a combination of on-chain and technical factors. A sustainable move above this area will invalidate the immediate bearish forecast.

The cryptocurrency market is slugging in recovery, accept for Bitcoin. Intense pressure continues to build on critical levels for major cryptocurrencies.

TRX ready for a major price explosion according to indicators

Tron has been trading inside a tight range from $0.028 to $0.0239 for the past three weeks without a clear direction. Several indicators show that TRX is on the verge of a massive breakout, but in which direction? Let’s take a look at some different metrics to find out.

Maker (MKR) is the 35th largest digital asset with a current market capitalization of $560 million and an average daily trading volume of $19 million. At the time of writing, the coin is changing hands at $558, down nearly 2% since this time on Monday.

The miners of the decentralized data storage network Filecoin started to abandon the project several days after the mainnet launch. They complain about the unjust economic model that forces them marketing FIL tokens to stay afloat.