SAFEMOON price is wallowing near two-week lows of $0.000003983, down nearly 10% over the past 12 hours, as the sellers remain in complete control after this week’s market turbulence.

Despite several encouraging tweets by the auto-generating liquidity protocol since the mid-week crash, investors continue to lack conviction amid a persistent downbeat mood across the crypto markets, courtesy of the recent Chinese regulatory announcements.

SafeMoon hit lifetime highs of $0.000008419 on May 12, in response to a broader market advance and celebrity endorsements. The most recent celebrity to promote SafeMoon is Barstool Sports founder Dave Portnoy.

Additionally, the meme-based coin also drew support earlier this month after the company tweeted out, a video boasting it was "CertiK Approved."

The downside appears more compelling for SAFEMOON, especially after the price failed to resist above the 100-simple moving average (SMA) at $0.000004362 on the 12-hour chart.

The sellers now await a 12-hourly candlestick close below the abovementioned key support, in order to challenge the immediate line of defense at $0.000003670.

If the selling pressure intensifies, the next downside target is aligned at $0.000003062.

The Relative Strength Index (RSI) is on the track to test the oversold territory, currently around 35.50, suggesting there is a scope for additional downside. 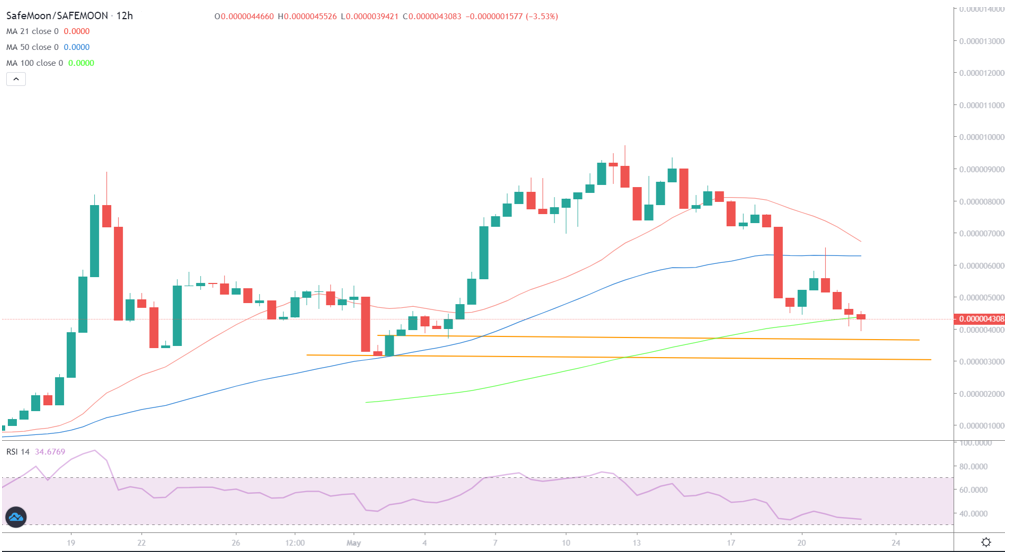 However, should the bulls recapture the 100-SMA support-turned-resistance on a sustained basis, a recovery towards the $0.0000050 psychological barrier cannot be ruled out.