The creators of the widely popular Baby Shark song are launching NFTs this week, FTX.US has expanded NFT support to Ethereum and more than 300,000 people are waiting for Matrix NFTs.

Earlier this month, the film studio announced it would be dropping 100,000 unique Matrix-inspired avatar NFTs for $50 each as part of a promotional campaign for the new Matrix Resurrections film set to hit cinemas in the U.S. on Dec. 22.

After more than 300,000 Matrix fans queued up for the drop on Nov. 30, Nifty’s was forced to start and stop the queue multiple times due to max capacity-induced “infrastructure issues.”

Hello again everyone. While we are obviously still working through the launch not going the way we had hoped it would, we appreciate every single one of you that have hung in with us, and we want to send a very sincere "thank you" from our team.

After the queue was paused multiple times, other issues started to occur such as users being bumped up or down the queue, the buy button not working and failed transactions upon checkout.

At the time of writing, there are still 347,133 people waiting in the queue and the issues are yet to be resolved. Nifty’s said that it is still actively working to address the issues, and has offered every Nifty’s user who queued up on Nov. 30 a free “glitch in the Matrix” NFT” for the inconvenience. 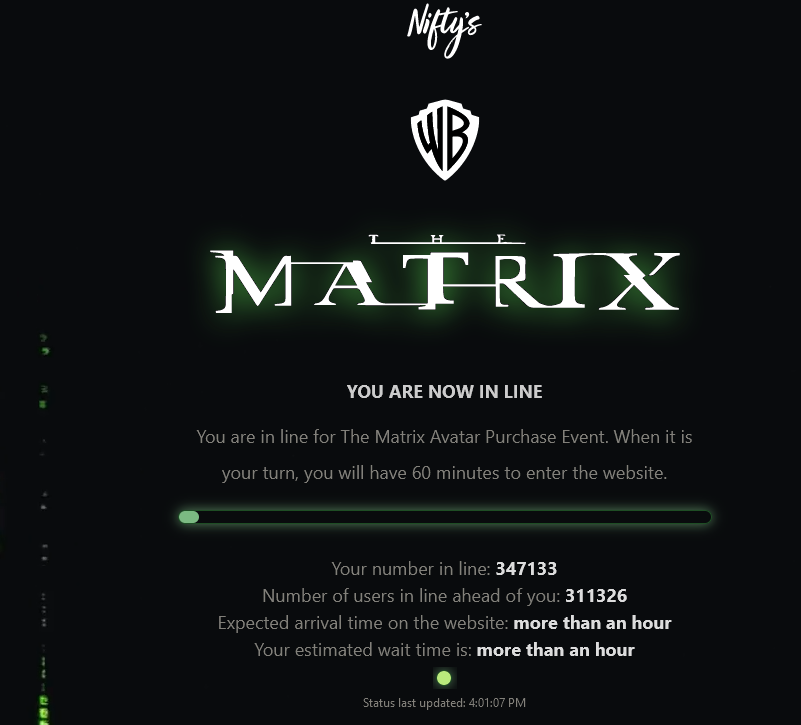 Pinkfong, the creators of the widely popular and alarmingly hypnotic children’s song Baby Shark, is releasing a collection of NFTs depicting content from the music video.

The collection consists of a 1/1 and five limited editions, and the NFTs feature the Baby Shark character along with its five family members in a series of animated and holographic GIFs backed by new original music.

The auction and sales will be hosted on Makersplace on Dec. 3, and the carbon emissions from the sale will be calculated and offset by sustainability platform Aerial. A starting price for the 1/1 NFT auction has not been specified, however the highest bidder will also receive a custom one-of-one vinyl record of the music depicted in the NFT. 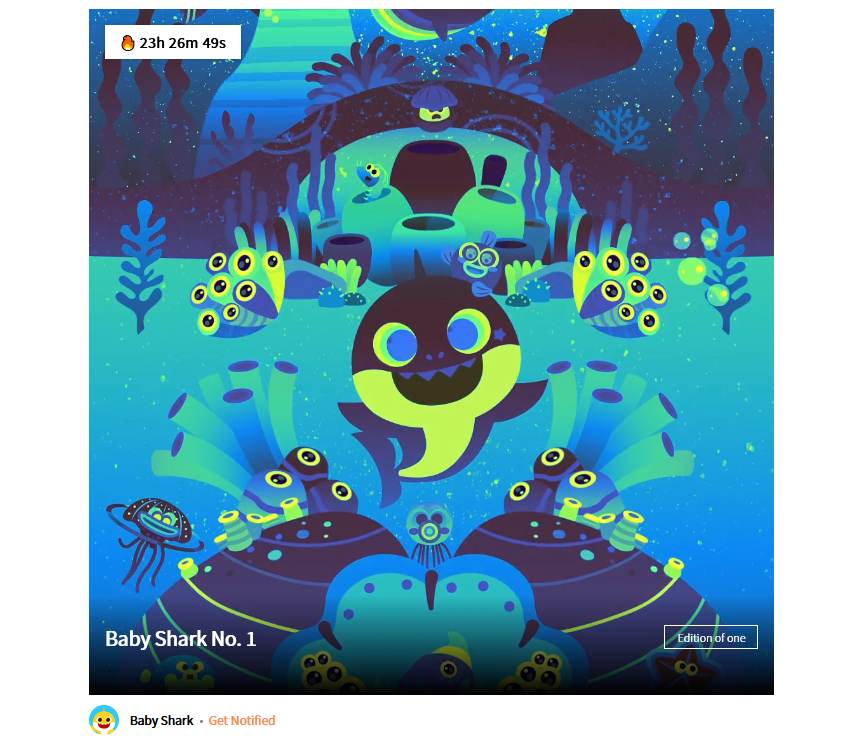 The Baby Shark music video has more than 9.7 billion plays on YouTube, making it the most played video on the platform.

A group of Masters of Business Administration (MBA) students from the Paris branch of the INSEAD graduate business school raised $3,000 for the school’s Robin Hood Scholarship fund via an NFT sale.

Ferdinand Issels, Michelle Yu and two other students created a Nyan Cat-inspired NFT titled “RobinGood #1” depicting Robin Hood riding a salamander from the school’s emblem. The project was a part of a week-long student-led fundraising campaign for the school’s fund that supports need-based scholarships. 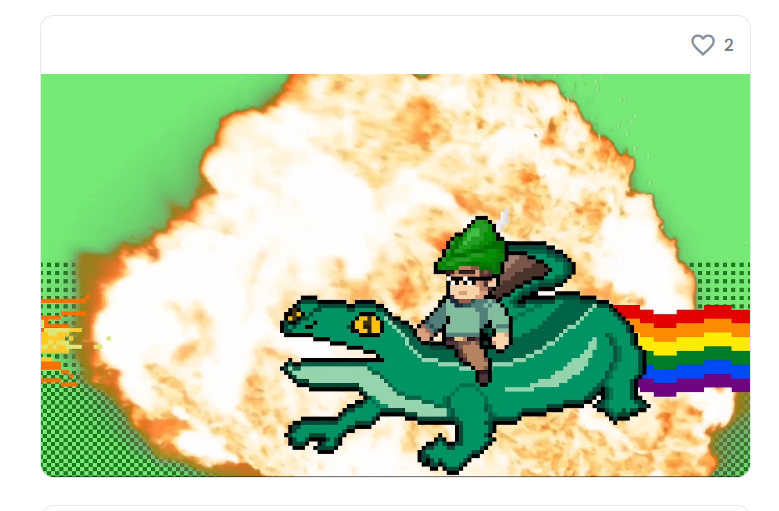 The NFT was auctioned off in fiat currency to allow any student to participate and was snapped up by graduate and Goldman Sachs banker Alberto Marega for 2,600 Euros, or roughly $3,000, and has since been minted on OpenSea.

“It is an amazing feeling that we were able to use this technology to contribute to a good cause,” said Issels, adding that, “I hope this encourages other people to further explore the positive impacts that blockchain-based technology can deliver.”

FTX.US revealed today that its NFT marketplace has expanded support to Ethereum-based NFTs.

We’re excited to expand our NFT marketplace, allowing users to buy, sell, and display their Ethereum NFTs alongside their Solana NFTs for the first time! Probably nothing. pic.twitter.com/DREqxvNDVc

Both FTX and the company’s U.S. subsidiary first jumped into the sector in September, rolling out NFT marketplaces with limited functionality. The following month, FTX.US expanded upon its platform by offering support to Solana-based NFTs.

Upcoming mobile-based NFT game Guild of Guardians generated $5.3 million from the sale of two tranches of its native token GEMS on Tuesday. The sellout token sale was oversubscribed by 82 times with around 808,000 users registering and more than 10,700 new GEMS hodlers purchasing a max amount of $500 worth of tokens.

Ross Ulbricht the founder of now-defunct dark web marketplace Silk Road, caused a stir on Wednesday by announcing his own NFT drop depicting hand-drawn artwork that will be auctioned off on Superare this month. Proceeds from the auction will help fund a trust to support Ulbricht’s efforts to be freed from prison.