Crypto experts have accused the owner of troubled crypto exchange FTX, Sam Bankman-Fried (SBF), of triggering a depeg in Tron network’s stablecoin USDD as revenge against rival exchange Binance which owns a large holding of the stablecoin.

The allegations form the latest twist in the FTX-Binance conflict, which began with Binance  allegedly triggering a run on FTX by dumping $584 million of its native token FTT, after FTX’s owner SBF’s views on crypto regulation stoked the ire of Binance CEO Changpeng Zhao (CZ).

Experts on crypto Twitter speculate that the USDT depeg, a drop of $0.03 from $1 parity, was triggered by a slew of liquidations by SBF’s trading arm Alameda Research. This was followed by the news that Justin Sun, the founder of Tron, stepped in to bail FTX out to re-establish USDD’s $1 parity.

Sun announced earlier today, that his team is working on bailing FTX out of its crisis and protecting Tron (TRX), BitTorrent (BTT), Just (JST), Sun Token (SUN) and Huobi Token (HT) holders on the exchange.

FTX v. Binance war, everything you need to know

A difference of opinion on crypto regulation between two rival exchange CEOs resulted in a full-blown war between Binance and FTX. While Samuel Bankman-Fried has been critiqued for his stance on DeFi and his move to turn regulators towards decentralized finance, CZ has been accused of being the mastermind behind the FTT collapse, the native token of the FTX exchange.

A bitter Twitter exchange between the two CEOs was followed by Binance’s risk-management decision to sell $584 million worth of FTT tokens in the open market. This resulted in a collapse of FTX’s native token, with FTT price declining from $22 to $2.74 within 48 hours.

The open market sale devastated FTT holders, at the same time, SBF worked hard to defend FTX’s native token’s price as the exchange holds it on its balance sheet. As FTT token’s price cratered, SBF sold several other assets held by his trading fund Alameda research to buy FTT tokens back and stabilize the price.

The buy back strategy failed, however, and the value of FTT tanked 90% in less than a week. SBF discovered that his liabilities now exceeded his assets and the FTX exchange faced insolvency.

Alameda Research shorted USDT to get back at Binance

On-chain analysts are now watching every move made by Samuel Bankman-Fried’s Alameda Research and the FTX exchange to predict future market moves. HsakaTrades, a crypto analyst on Twitter believes that the entire crypto market seems to be in the grasp of Alameda.

Hsaka identified an on-chain transaction in which Alameda shorted USDT in three steps. The trading fund is supplying USD Coin (USDC) on Aave, borrowing Tether and swapping it back to USDC on Curve.

On-chain evidence of this transaction has been logged on Etherscan

Web3 developer Jesse Hynes accused Alameda of shorting USDT in a tactic to hurt Binance since the rival exchange holds 17.6 million of Tether on its books. Binance disclosed its exchange balances in hot and cold wallets:

According to Hsaka Alameda’s objective is not to depeg USDT, but to sell the stablecoin post a squeeze and book profits through algorithmic trades. The $250,000 worth of USDC kicked off the process, a depeg in the largest stablecoin would generate fear and traders would react, pushing USDT pairs higher.

The expert explains the trade and his speculation in this tweet:

ALL SPECULATION. I AM A CLUELESS WOLF https://t.co/tNoocbUnzO

Justin Sun’s Tron network has a stablecoin USDD. The stablecoin suffered a depeg, sliding down from its $1 parity to $0.97 and raising concern among traders in the crypto ecosystem. The price drop started before Justin Sun’s announcement to put together a plan to help bail out FTX exchange and protect Tron ecosystem token holders.

Tron’s stablecoin is currently exchanging hands at $0.97 and struggling to re-establish its peg. Justin Sun speculated that the USDD depeg is a result of Alameda Research offloading it in large volumes. USDD price is crumbling under selling pressure and failed to hit the $1 level in the last 24 hours. 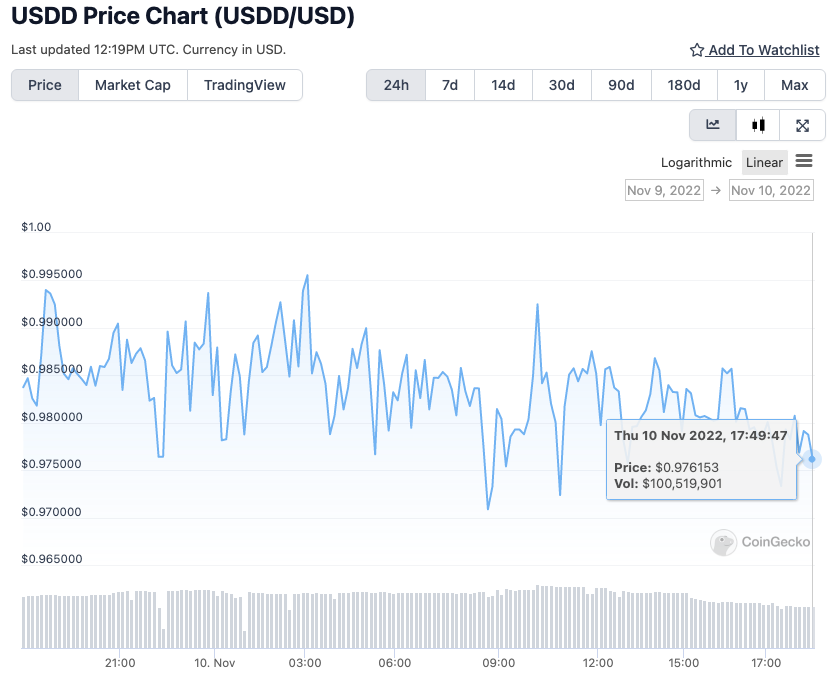 I think probably Alemeda just sold their USDD to cover the liquidity of ftx exchange. The pool currently is back with a healthy rate. pic.twitter.com/oSIzUNqE0Z

Justin Sun’s announcement to tackle FTX’s liquidity crisis was void of detail. Since the tweet, USDD has ranged between $0.973 and $0.975. This leads crypto traders and experts to the question whether Tron’s USDD is a collateral in the cryptocurrency war between Binance and FTX.

Disclaimer: FXStreet has reached out to FTX exchange to get an official statement about the recent developments, but it has yet to hear back.