XRP price is recovering after the massive downswing that has been going on for more than a year. Unlike many altcoins, the remittance token is taking its sweet time to rally higher. However, the company Ripple seems to be doing well despite facing a war on multiple fronts.

Ripple seems to be putting up a good defense in a lawsuit brought forward by the US Securities and Exchange Commission. Moreover, Ripple’s lawyers have been pressuring the plaintiffs to hand over the conversations that transpired prior to the Former Director of SEC William Hinman’s speech in 2018.

As reported previously, these documents would provide Ripple with the necessary ammunition to make a strong case in their defense since Hinman consulted the SEC on its opinions, having multiple discussions with the commision before making his speech.

The latest development includes a detailed response from the SEC on May 31, which denies the defendants access to the said documents due to attorney-client privileges.

#XRPCommunity #SECGov v. #Ripple #XRP The SEC has filed its opposition to the Ripple Defendants' Motion challenging the SEC’s Responses to the Defendants’ Fourth Set of Requests for Admissions, claiming that is has fairly and substantively responded to the requests at issue. pic.twitter.com/x6uRYnMph6

There is, however, a conference scheduled on June 07, 2022, to discuss the SEC's renewed assertion of the attorney-client privilege as to internal documents related to Hinman's June 14, 2018 speech.

Plowing through despite challenges

In a recent interview with Cointelegraph on May 30, Ripple CEO Brad Garlinghouse announced a $100 million investment in the carbon trading segment. These Carbon markets play a vital role in reducing greenhouse gas emissions.

Adding more on this topic, Garlinghouse said that unlike cryptocurrencies that utilize a lot of resources, NFTs do not. He continued that although there is a lot of localized hype around non-fungible assets, the asset class as a whole is still wildly undervalued and “underhyped.”

In Q3 2021, Ripple allocated $250 million for the Creator Fund to support creators, brands, and marketplaces to explore new use cases for non-fungible tokens on the XRP Ledger.

While the fundamentals are shining bright for Ripple, the technicals are also leaning bullish for XRP price, hinting at a massive rally soon.

XRP price has formed three lower highs and equal highs since May 13. Connecting these swing points using trend lines results in the formation of a pattern known as a descending triangle. This technical pattern forecasts a 13% downswing to $0.345, obtained by adding the distance between the first swing high and low to the breakout point at $0.398.

Although XRP price broke to the downside on May 26, it failed to go all the way to its target, indicating that this was a fakeout. Ripple then reversed its trend and climbed back into the pattern.

Currently, XRP price is trading above the triangle’s hypotenuse and is likely to retrace lower to $0.398 before triggering the next leg-up. This move will allow sidelined buyers to step in, triggering the next phase of the rally and propelling XRP to $0.455.

In a highly bullish case, this move will retest the $0.555 hurdle, bringing the total gain to 40%. 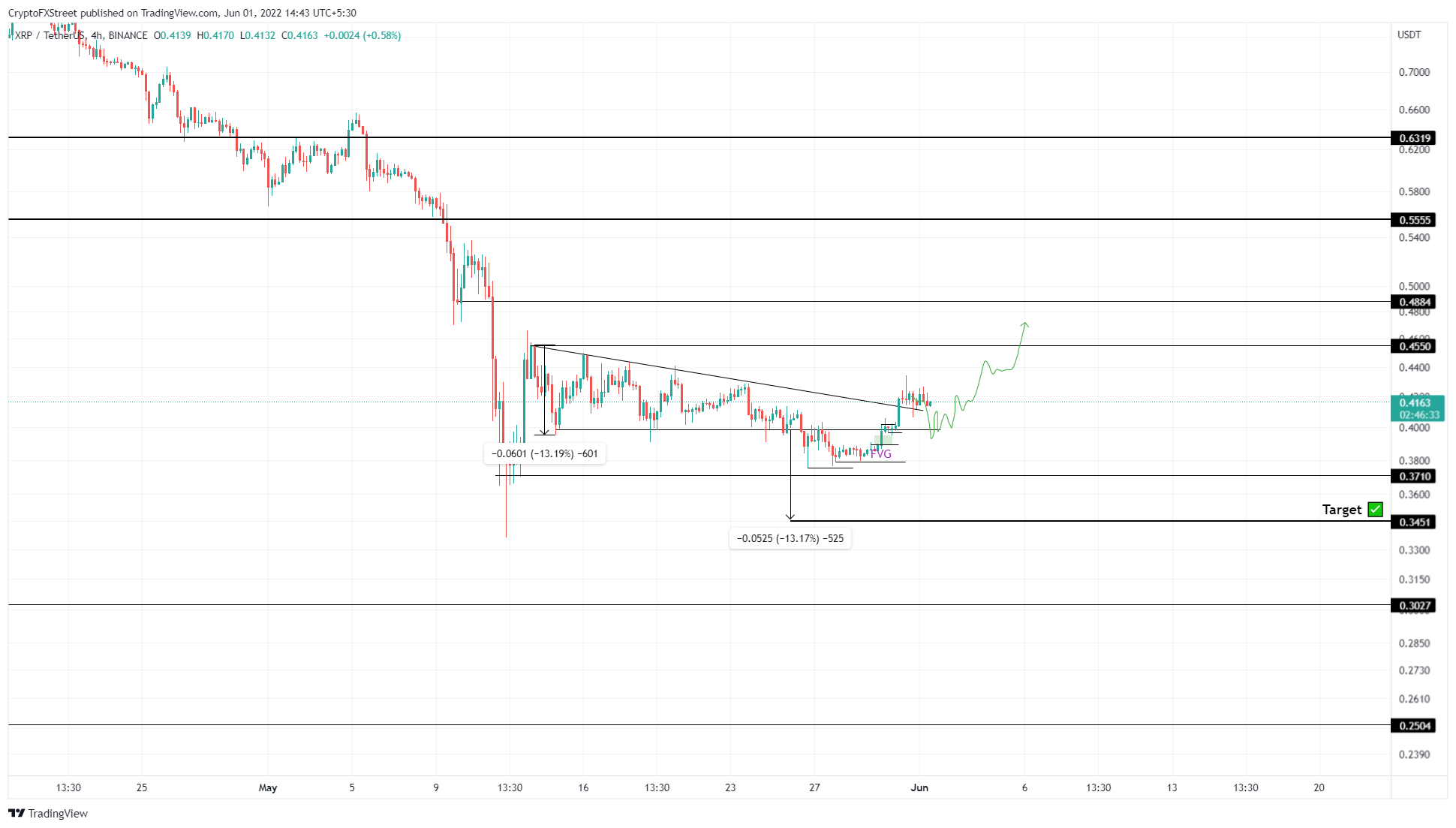 While things are looking up not just from a fundamental but also from a technical perspective, a four-hour candlestick close below $0.371 will invalidate the bullish thesis by producing a lower low. This development could propel the remittance token down by 18% to $0.302.