Ether and other major cryptos spend much of the weekend in the red to close a turbulent week.

Prices: Bitcoin spent much of the weekend in the red and below $19,000; other cryptos also fall.

Insights: The 'most profitable' mining GPU won't offer much of a payoff; investors would do better with a bitcoin mining stock.

With a couple of brief detours higher, bitcoin remained below $19,000 throughout the weekend.

The largest cryptocurrency by market capitalization was recently trading at about $18,800, down slightly less than a percentage point over the past 24 hours. The decline capped a turbulent week of steep interest rate hikes by the U.S. Federal Reserve and other central banks and shrinking economic indicators that point increasingly toward recession.

"Bitcoin remained under pressure due to the macro economic environment, and we maintain that below $20,000 remains a strong accumulation opportunity for mid- to long-term horizons," said Joe DiPasquale, CEO of crypto fund manager BitBull Capital.

Post Merge Ether spent a similarly dreary weekend almost entirely in the red. The second largest crypto in market value was recently changing hands at about $1,300, down more than a percentage point from the previous day, same time. ETH has been trading lower over the 10 days since the Merge, the technological shift of the Ethereum blockchain to a more energy efficient, proof-of-stake protocol. Other major cryptos were largely in the red with SOL and popular memecoin DOGE each down more than 2%.

Crypto price decreases dovetailed with equity markets and other assets – riskier and more safe haven – that closed down during a dismal Friday. The tech-focused Nasdaq and S&P 500, which has a strong technology component, tumbled 1.8% and 1.7%, respectively. Those indexes have plunged five of the past six weeks amid ongoing investor fears about inflation and the economy. Cryptos have largely tracked stocks this year.

Meanwhile, the dollar's recent surge has suggested that cryptocurrency prices are likely to continue languishing, although CoinDesk's Lawrence Lewitinn also noted in a Sunday column that cryptos, similar to equities, have been more nuanced in their response to events.

For example, in the seven days following the release earlier this month of a disappointing Consumer Price Index, the CoinDesk Smart Contract Platform Index (SMT), which includes ETH, ADA and SOL, plunged almost 20%, while the CoinDesk Culture & Entertainment Index (CNE) – filled with NFT-related and metaverse coins like ApeCoin’s APE and The Sandbox’s SAND slipped by “only” 6.9%. (Lewitinn noted that the Smart Contract Index's fall stemmed at least partly from ether's decline following the Merge)

"Crypto is still in its nascent stages compared to other asset classes," Lewitinn wrote. "It has its own idiosyncrasies and prices move for reasons other than, say, dollar strength."

He added: "For traders, thinking about crypto in terms of segments means, among other things, coming up with more sophisticated ways to trade in a rising-rate environment.

"If BTC doesn't break down in the coming days, we could see upward movement in October with $24k and $26k being initial levels to watch," he wrote.

Ethereum’s Merge happened 12 days ago, writing the obituary for GPU mining. Days after The Merge, one graphics card manufacturer took the coming glut of cards (which are already not that profitable to produce) to quit the business altogether.

Despite this, there are still proof-of-work tokens on the market. These aren’t exactly blue-chip tokens on the front page of CoinGecko, but rather altcoins like BitcoinGold, Neoxa (which has a market cap of $4 million) or Cortex. 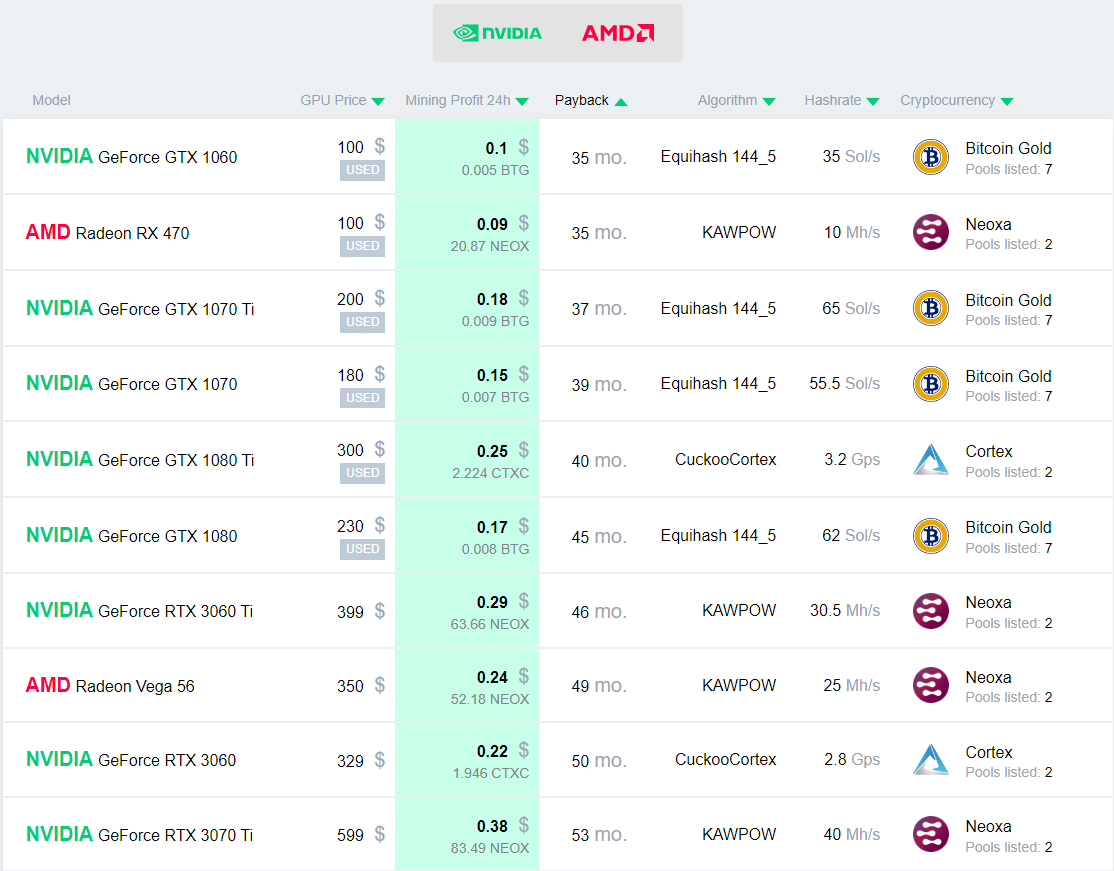 But the numbers aren’t going to work for miners looking to snap up some now-plentiful, used GPUs for mining. The best case scenario, using the GeForce GTX 1060, which goes on the second-hand market for $100, sees the card’s value being recovered in mined crypto in 35 months or almost three years.

And that’s based on a lot of assumptions. There’s not a rugpull with the token. The card doesn’t break down – a possibility with months of constant use – and the token’s value stays the same or increases (that’s asking a lot in the world of crypto).

Absent from these assumptions are power costs. Adding them to the calculation is beyond the scope of the tool from 2cryptocalc’s abilities.

But what if you wanted to mine a semi-useful token?For that, consider WhattoMine, which gives us the ability to calculate mining profitability based on hashrate and power cost.

Our trusty GeForce GTX 1060 has a hashrate of 23Mh/s for Etchash, the algorithm used for Ethereum Classic. 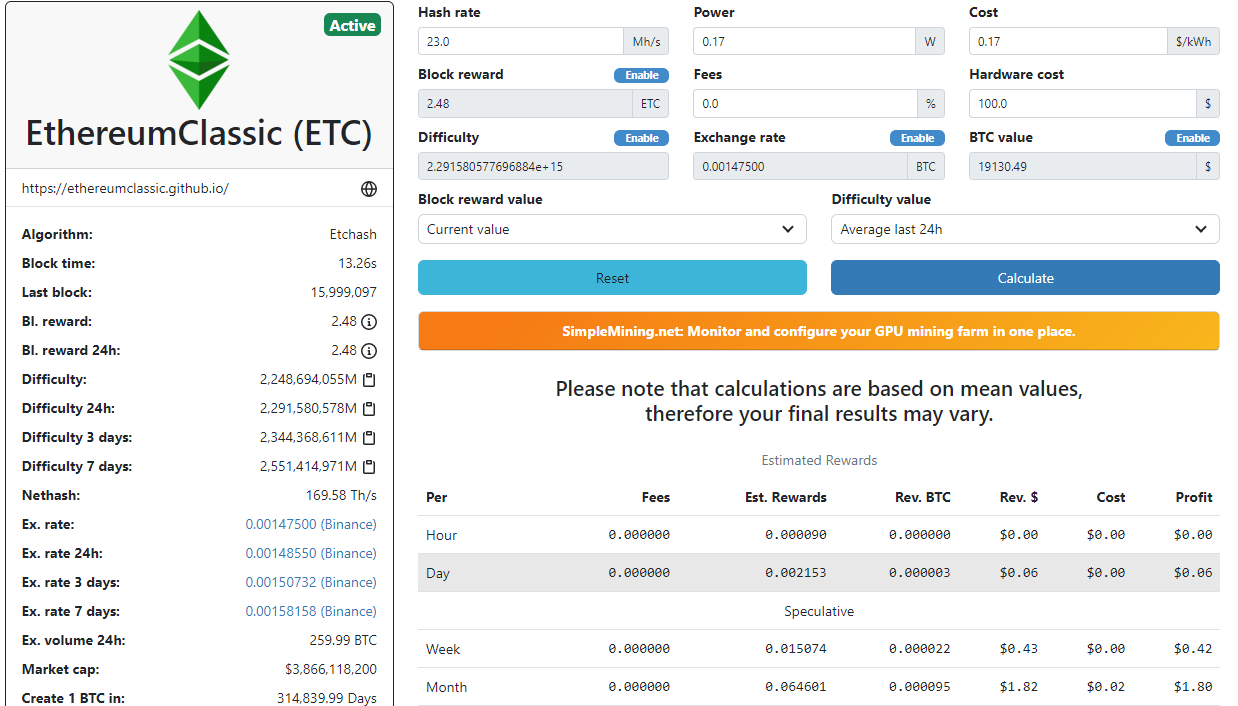 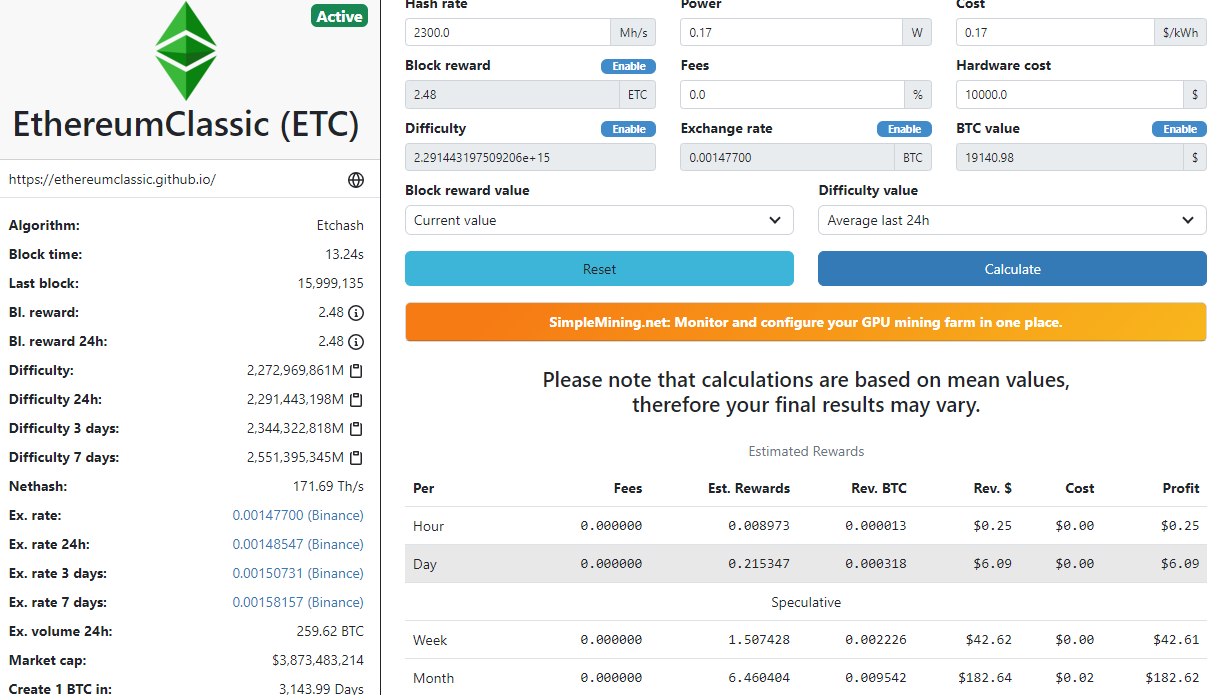 Even with ASICs, specialized silicon that’s built for mining, the math isn’t much better unless you have extreme scale. Data now shows that the most profitable ASIC miner for retail miners, the Bitmain Antminer L7, generates $8 in profit per day as part of the Nicehash pool.