The latest swing low was created on March 25, which resulted in a 38% upswing just above $2,000. However, sellers have managed to push ETH below the parallel channel’s middle line to where it currently trades at $2,083.

The smart contracts platform token faces a crucial decision that could determine its trend for the foreseeable future.

If the buyers can manage to sustain above the Momentum Reversal Indicator’s (MRI) breakout line at $2,350, the Ethereum price could soon set up a new all-time high at $2,500.

However, a decisive close below $2,041 will see ETH drop 13% toward the 50-day Simple Moving Average (SMA). This level coincides with the 78.6% Fibonacci retracement level.

Supporting the bearish scenario is the weekly chart, which shows the Ethereum price forming higher highs while the Relative Strength Index (RSI) has created lower highs. Such a setup is known as a bearish divergence and forecasts a correction.

Additionally, the RSI is in the overbought zone, suggesting an overextended rally. The MRI complies with the RSI’s bearish outlook as it has spawned multiple A, B and C extensions, which indicate an incoming reversal. 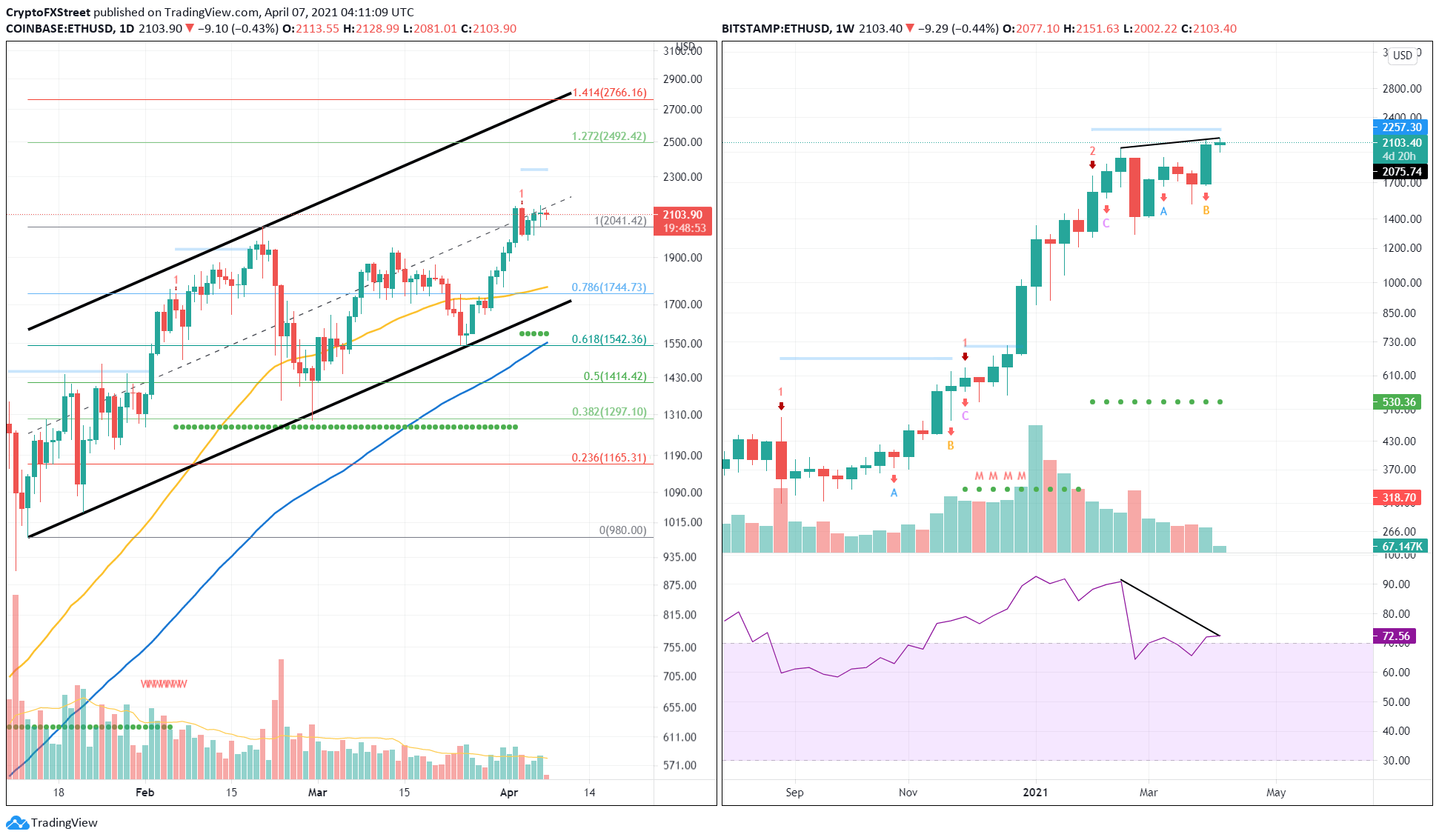 The number of whales holding 1,000,000 to 10,000,000 ETH tokens seems to significantly influence the Ethereum price, as seen in the chart below. A surge in these investors’ holdings saw the market value of ETH appreciate and vice versa.

Two of these market participants have left this category after the smart contracts platform created a new high at $2,144 on April 2. This 18% reduction in whales paints a bearish outlook for Ethereum.

Although ETH’s scenario looks grim, a bullish narrative is not unlikely, especially considering the declining ETH balance on exchanges.

Ether’s supply as a percent of total supply held by centralized entities has dropped 4% since hitting the record levels on April 2. This shrinkage effectively reduces the selling pressure and suggests that investors are confident in the bullish potential of ETH.

A daily candlestick close above the MRI’s breakout line at $2,350 will trigger buyers to jump on the bandwagon. In such a case, the Ethereum price could surge 6% to the immediate supply barrier at $2,500.

Upon breaching this level, the altcoin giant could increase 10% to hit the 141.4% Fibonacci extension level at $2,765.