The current positive inflation rate indicates that the volume of ether being minted now outpaces the amount that is being burned. 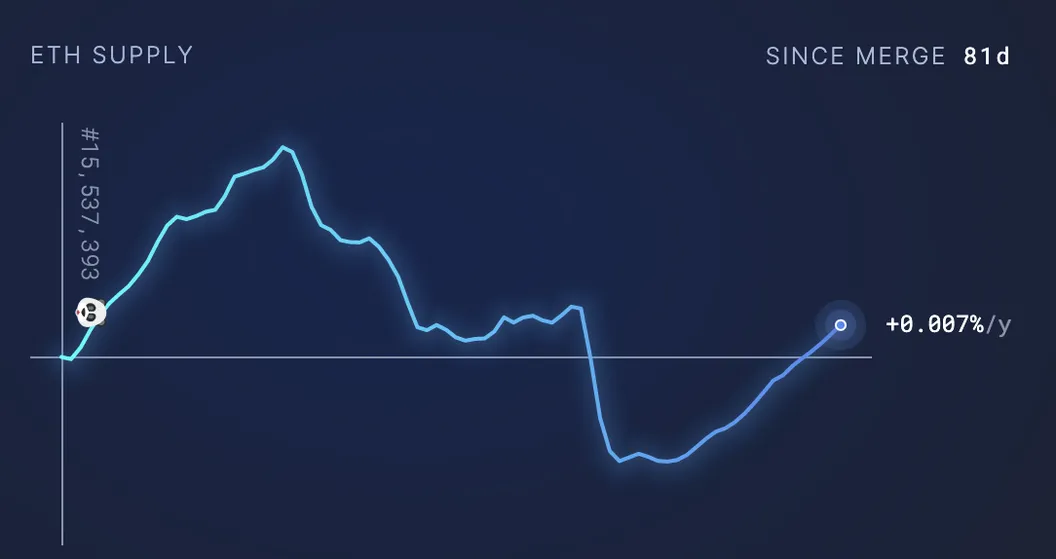 Data from ultrasound.money shows ether (ETH)’s net issuance – the annualized inflation rate – has risen to 0.07% – after previously dropping below zero amid market volatility linked to the collapse of crypto exchange FTX. A consequent rise in Ethereum network usage had led to millions of dollars in crypto moving on-chain.

But the current positive inflation rate indicates that the volume of ether being minted now outpaces the amount that is being burned. Supply has increased 0.14% at an annual rate over the past seven days, according to ultrasound.money.

Crypto market watchers widely expected that Ethereum’s Merge, which shifted the platform’s protocol from proof-of-work (PoW) protocol to a more energy-efficient proof-of-stake (PoS) protocol on Sept. 15 would turn ether deflationary. The upgrade in theory eliminated mining and staking rewards totaling about 1,600 ETH per day – a 90% drop in new issuance.

But Ethereum’s inflation rate also depends on a separate mechanism known as the Ethereum Improvement Proposal (EIP)-1559, where fees paid for transactions on the network are “burned,” or eliminated from circulation. The EIP-1559 is essentially tied to the amount of ether burned with network usage: The more transactions on the blockchain led to more ETH being burnt.

According to data from Etherscan, the amount of ETH burnt has spiked as much as 5,000 ETH in a day after FTX’s implosion triggered market jitters. Now the burn rate has slowed to around 1,200 ETH daily.

Hotz believes that the mechanism is neither net inflationary nor net deflationary, but rather, it creates “a credible and steady supply of ETH” and sees “more adoption of Ethereum through layer 2 activities.”

“It's a lot like what the Federal Reserve does with the US economy: It reduces the supply of money when the economy is hot, and vice versa,” he added. “That’s what EIP-1559 does. That’s kind of the idea, especially after the Merge.”

At the time of publication, ETH was trading around $1,265, roughly flat over the past 24 hours.