Last Friday, a Slovakian crypto exchange service, Eterbase, recovered the first part of $5.4M that was stolen as a result of a system hack in September of last year. Thanks to ChangeNOW who managed to stop the transaction the same day the hack happened, 600,000 MATIC coins were returned to Eterbase. ChangeNOW waited for Eterbase’s refund request for about a year before reaching out to the exchange themselves. During this time period, the price of frozen Polygon coins increased by about 90 times and now amounts to $1M.

Eterbase has been struggling to stay in the market ever since the hack happened and recently filed for bankruptcy. The company’s future might now depend on whether other exchange services will return the missing money to Eterbase or not.

What was the Eterbase hack and what are its consequences?

On 7 September in 2021 six of Eterbase’s hot wallets were compromised, and around $5.4M worth of crypto was stolen. The hacked assets included multiple cryptocurrencies such as Bitcoin, Ethereum, Tron, Tezos, Algo, Polygon, and others. Unfortunately, Eterbase wasn’t able to stop the hack immediately after it was detected. Later, when the wallets’ addresses were tracked, it turned out that at least a part of the stolen money ended up in different crypto exchange platforms, including Binance, Huobi, HitBTC and others. So, Eterbase asked these services to freeze the funds. So far, ChangeNOW has been the only exchange platform that has officially confirmed it has stopped the suspicious transaction and returned the money.

After the cyberattack, it has been extremely difficult for Eterbase to keep its place in the market. It entered maintenance mode after the hack but later continued its work. In April, though, the platform announced that it would stop all its operations and asked their users to withdraw the funds. 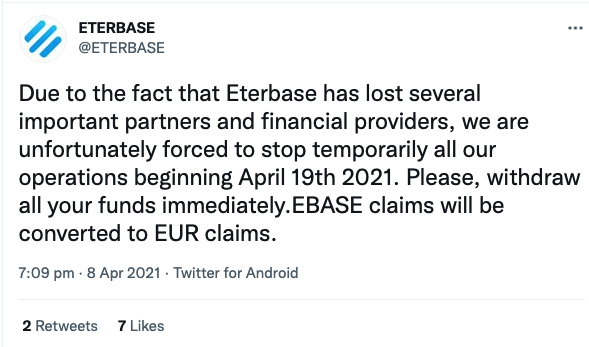 Finally, in October of this year, Eterbase filed for bankruptcy.

ChangeNOW is one of several crypto processing services through which cyber-criminals tried to swap the stolen funds. When the platform was about to carry out a MATIC to BTC transaction, on 7 September 2020, the service’s AML system found out that the recipient address was reported, and immediately froze the funds.

After that, ChangeNOW stored 600,000 MATIC for a year, waiting for a request from the crypto's owner to recover the lost amount under their terms of use. Since for a whole year no request was received, this fall, the exchange platform reached out to Eterbase and informed the service about the withheld amount. Then, ChangeNOW cooperated with the Slovakian Police to get the necessary verification and returned 600K MATIC, the value of which grew by 90 times during the year, reaching over $1 million, to Eterbase.

Mike Ermolaev, Head of PR at ChangeNOW, shared his thoughts about the incident:

“We believe that digital currencies should not be something that people are afraid to deal with since it is an amazing alternative to the fiat economy and should be accessible and safe for everyone. By its example, ChangeNOW wants to prove that crypto platforms can be transparent and trustworthy.”

What about the rest of the money?

ChangeNOW is the first and for this moment the only platform that has returned the missing funds to Eterbase. Other stol en crypto amounts were tracked and reported to be kept at different exchanges such as Binance, Huobi Global and HitBTC. In one of his recent Tweets, the co-founder of Eterbase, Robert Aux, expressed his hopes of other exchange platforms returning the missing crypto coins to Eterbase. 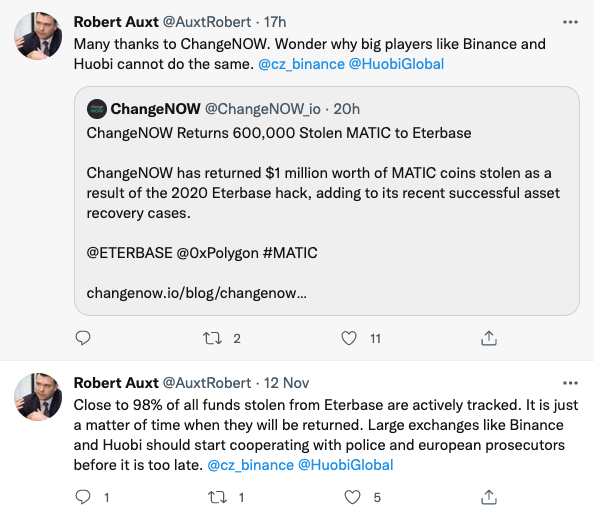