Yesterday, Bitcoin (-0.75%) made a failed attempt to break the $700 barrier, producing a bearish engulfing candle that brought its price back to the price to the previous range. The rest of the major cryptocurrencies followed a similar move, so, currently, there is a slight bearish turn. Among the most capitalized, Ethereum classic (-4.55%), Ethereum(-2.39%), and Litecoin (-2.65%) are the worst performers, but, so far, the volatility experienced by the digital currencies are low.  On the Ethereum-based section, HEDG (-10.43%), KCS(-7.65%) and BAT(-5.11%) are dropping the most among the token leaders, whereas REP(+5.13%), and, notably, MTL (+47%) and DATA(+54.8%) are making large advances. 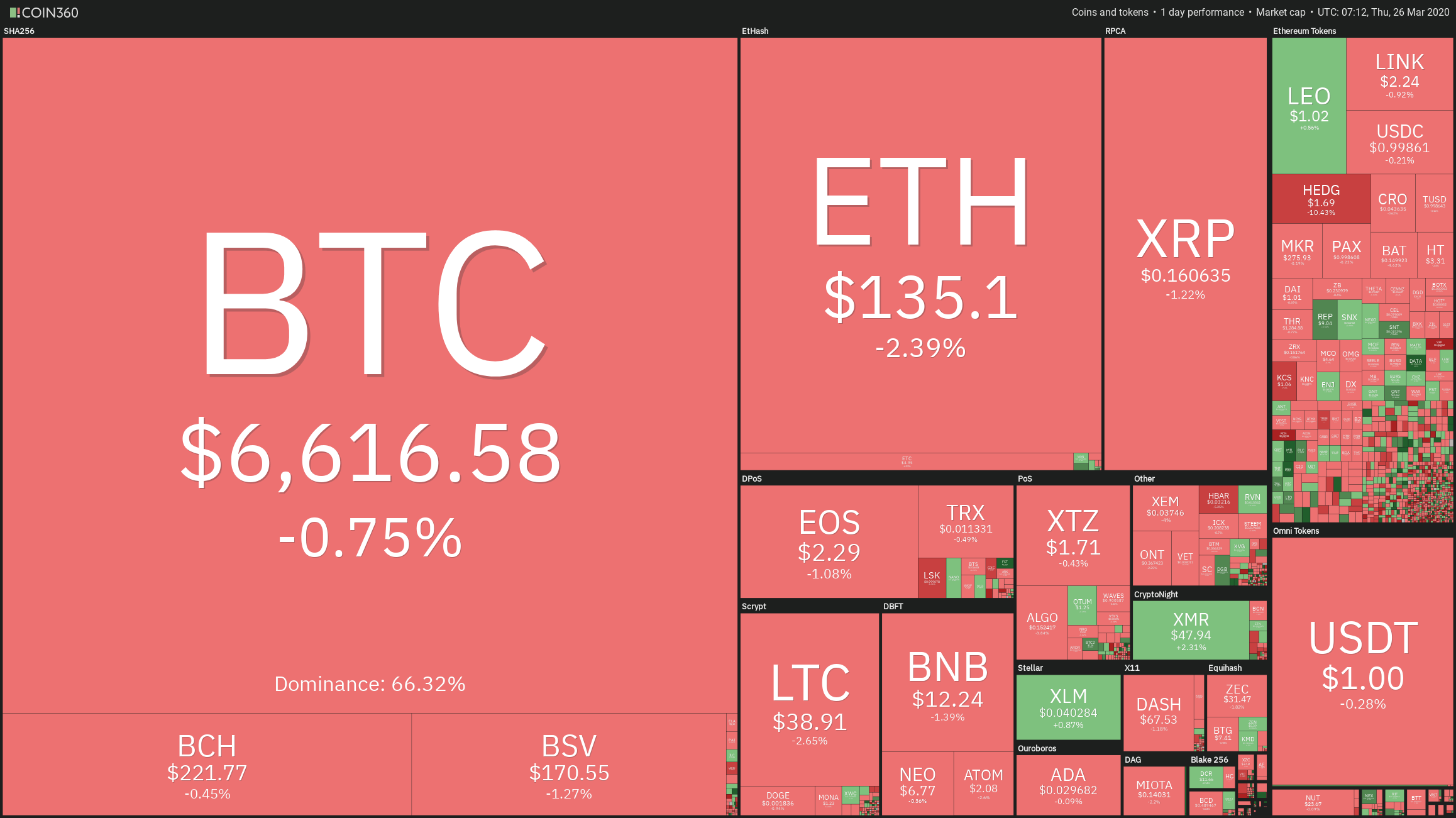 The Market Capitalization fell by 1.8 percent in the last 24 hours and is currently $182.458 billion. The 24H traded volume also dropped to $41.103 billion, a 12.3 percent drop, whereas Bitcoin dominance descended slightly to 66.21 percent. 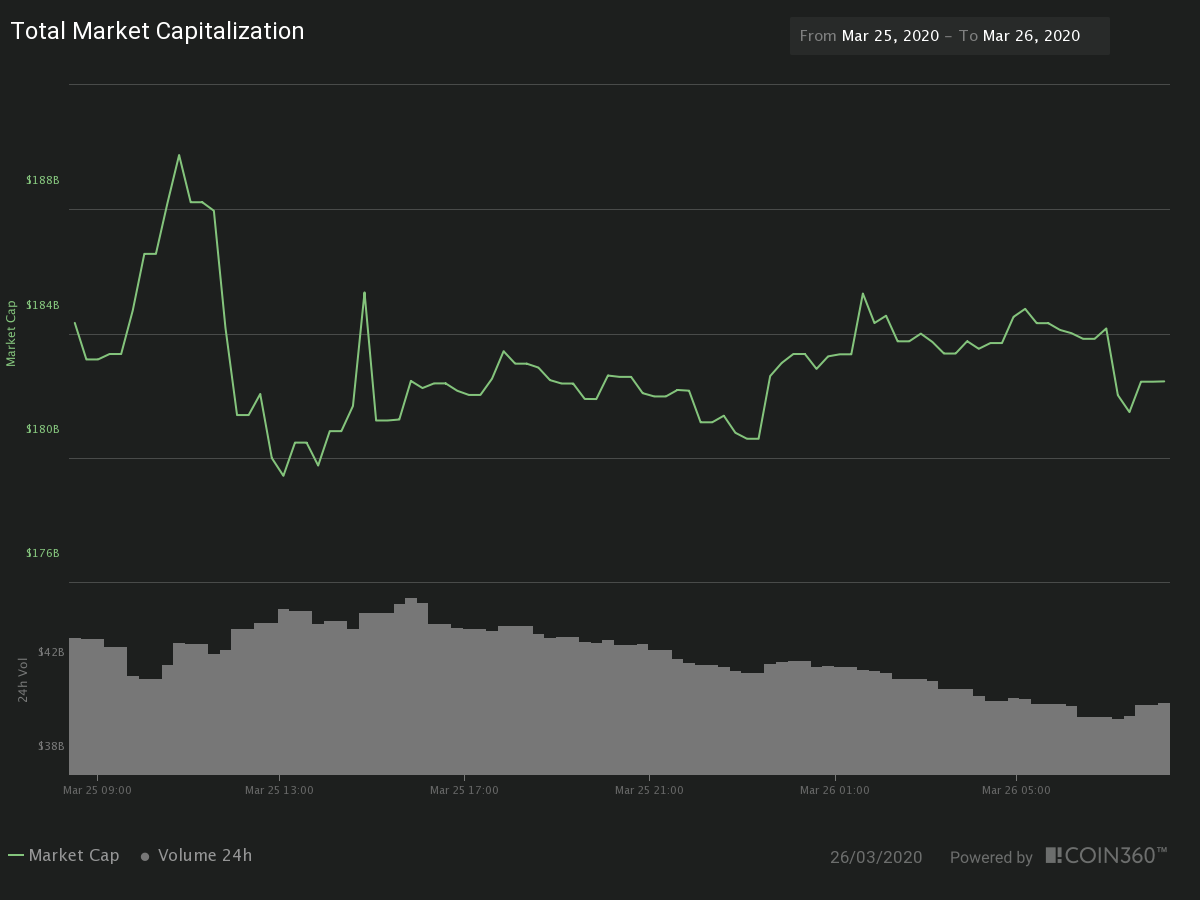 According to an article by Marketwatch, although the Dow Jones Industrial Average posted its largest recorded one-day point gain on Tuesday, propelled by the news of the approval of the $2 Trillion stimulus package, the uncertregarding the COVID-19 spread may make this bullish move short-lived. Analysts are expected a retest of the market lows, and even continue making new lows. They are also bearish long-term, as they think 2021 will be nastier.

Bitcoin mining difficulty dropped by almost 16 percent. This metric, an indicator of the competition among miners, had the second-largest drop in history. That may mean, miners with older equipment are being pushed out of the market by the recent fall in the BTC price. That may be an early indication of what is to come after the bitcoin halving would cut the mining rewards in half. 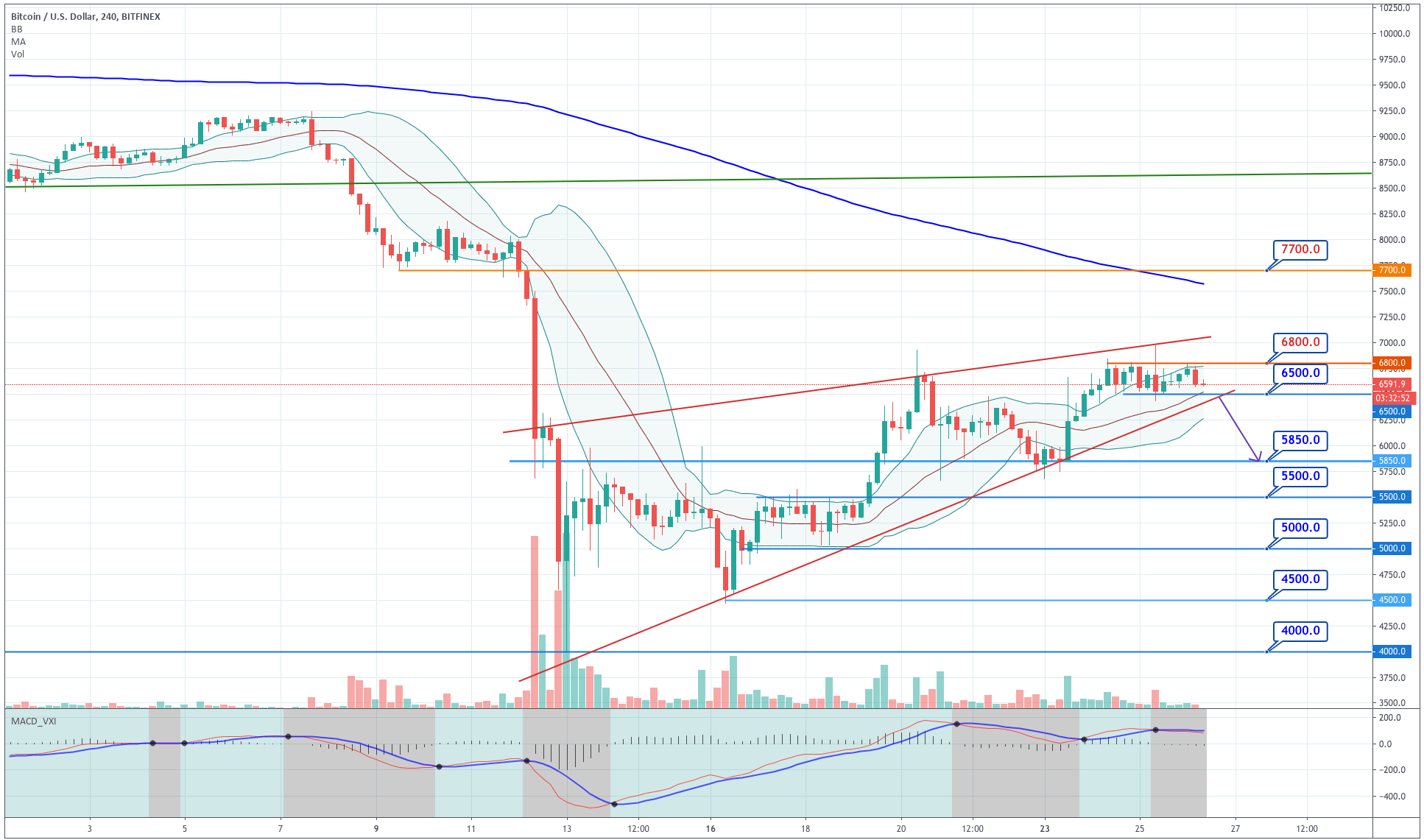 The failed attempt by the buyers to push BTC's price above $7,000 has created an engulfing candle with a large upper wick that showed the willingness of the sellers to take this price. Now the price is behaving with weakness, as the MACD moves into a bearish phase. The volume is low, and so is volatility. Thus, we must wait to see how the current tight range BTC is in is solved. The levels to observe are $6,800 and $6,500. 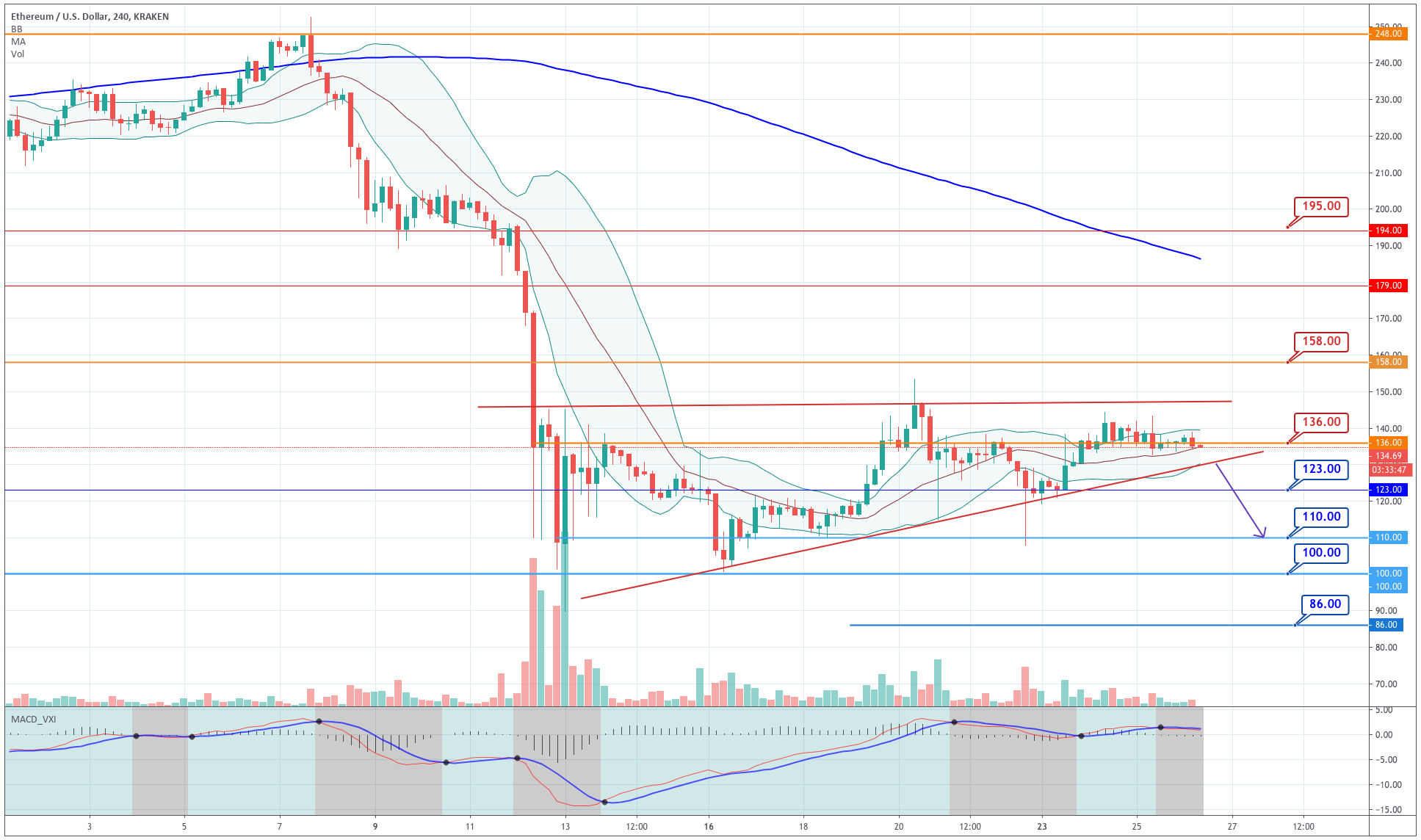 Ethereum is almost in the same situation as Bitcoin. The price has made an attempt to break above its recent $144 high and failed, creating an engulfing candlestick. Then the price continued moving horizontally in a very tight range, but with a slight bearish bias. Now it is touching the mid-Bollinger band, after making another engulfing figure, dropping below the $136 key level. If ETH moves and closes below $130, it is highly likely sellers will come in and push its price lower in a potential visit to $110 and $100. 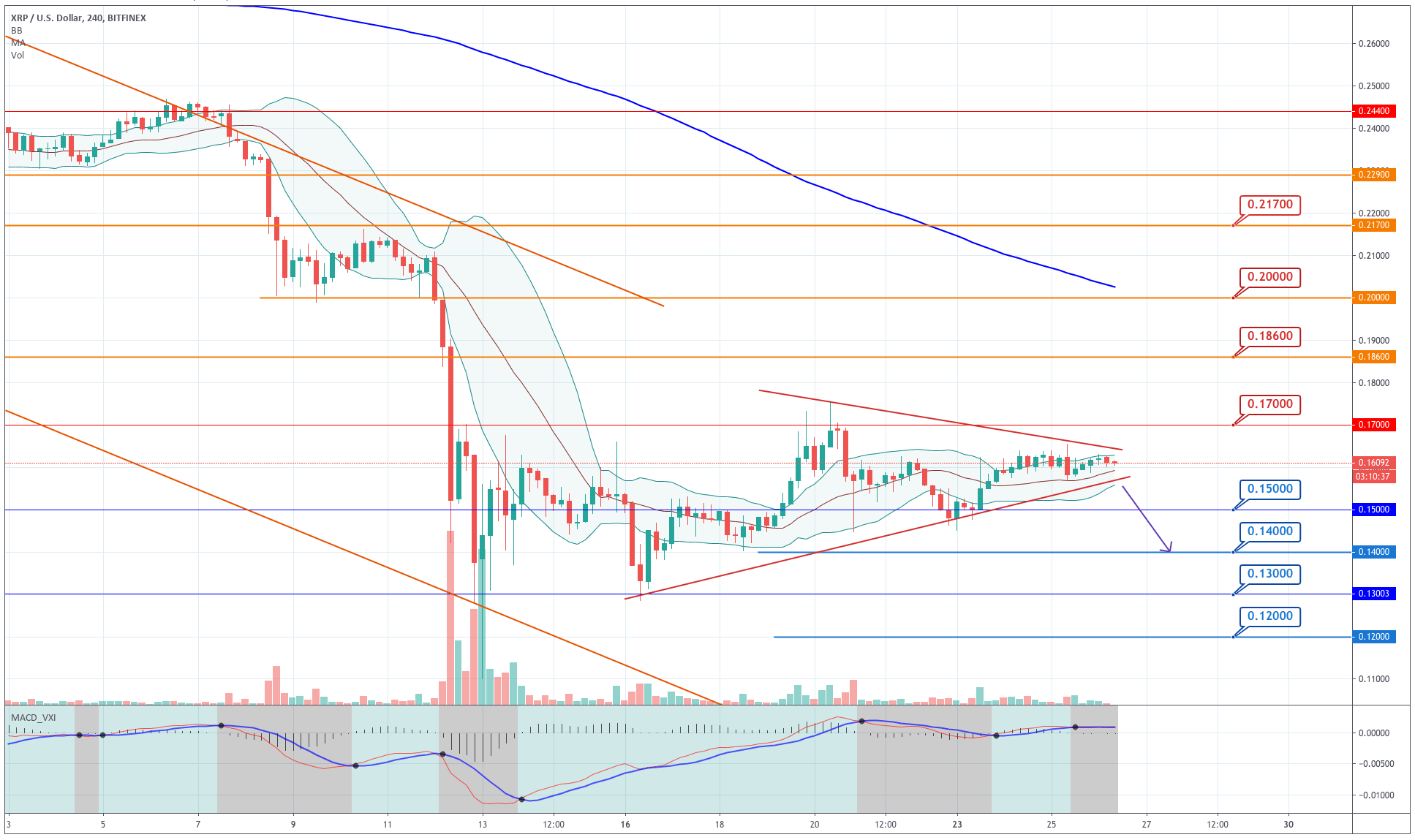 Ripple's price action is creating a triangular figure. Currently, the price is also creating a tight range in the vicinity of the $0.16 level, as the traded volume thins out. Traders must wait till this is resolved in a burst of volatility that will likely reveal its future direction. The price still moves in the upper side of the Bollinger bands, so there is a slight short-term bullish bias, but the primary trend continues to be bearish. So, we estimate that the triangle will be resolved to the downside. The technical levels remain unchanged.

BTC/USD is hovering around $6,300, down 1% on a day-to-day basis. The first digital coin has been moving within a short-term bearish trend amid expanding volatility.

Ripple (XRP) has been range-bound recently. The third-largest coin settled above $0.1700, which is a good signal, but the further upside seems to be limited so far.

Bitcoin Cash price if dealing with increased selling activity on Wednesday just like the other major cryptocurrencies. BCH/USD is down 1.33% on the day while the price hovers above the initial short term support at $214.