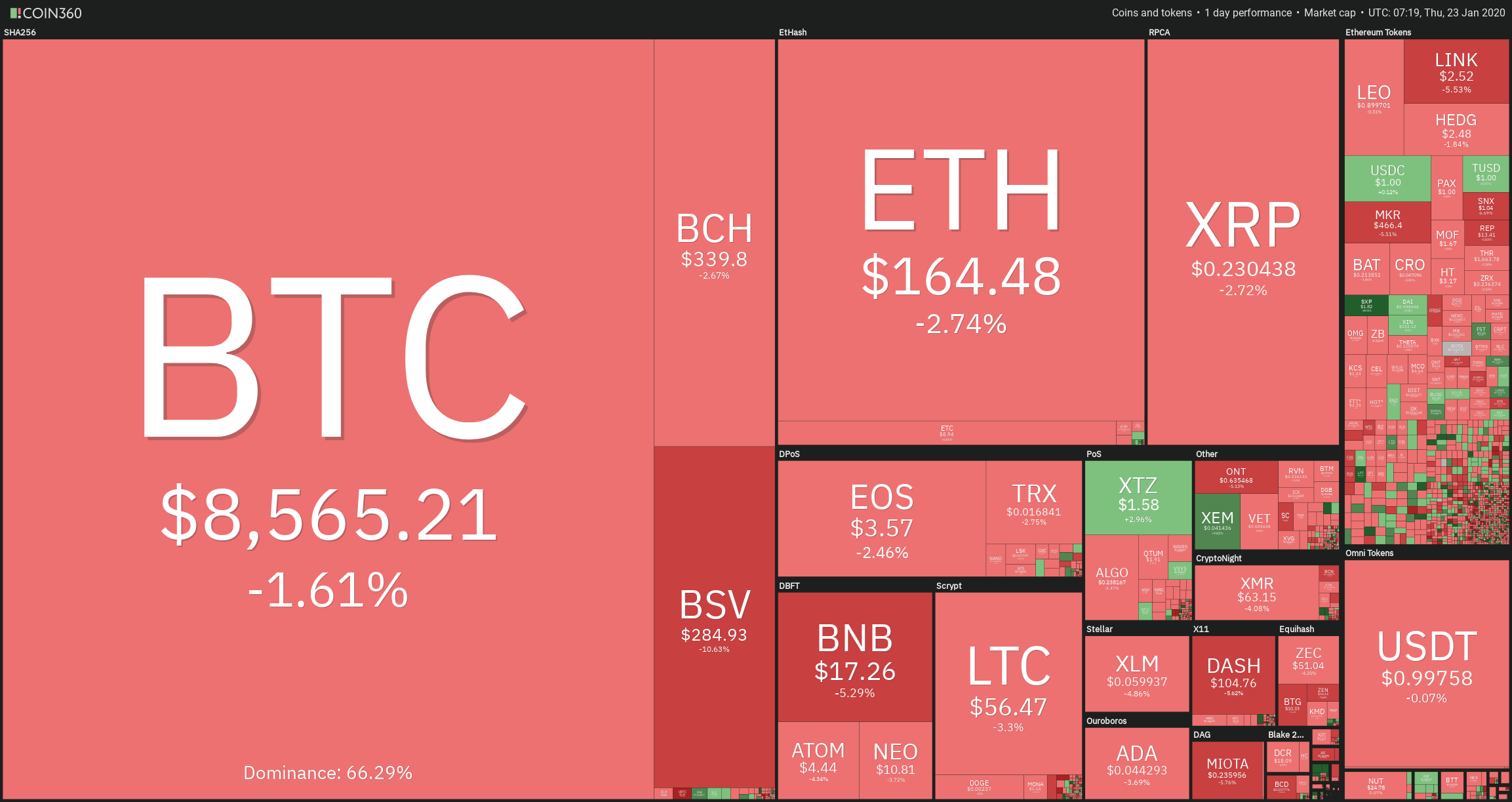 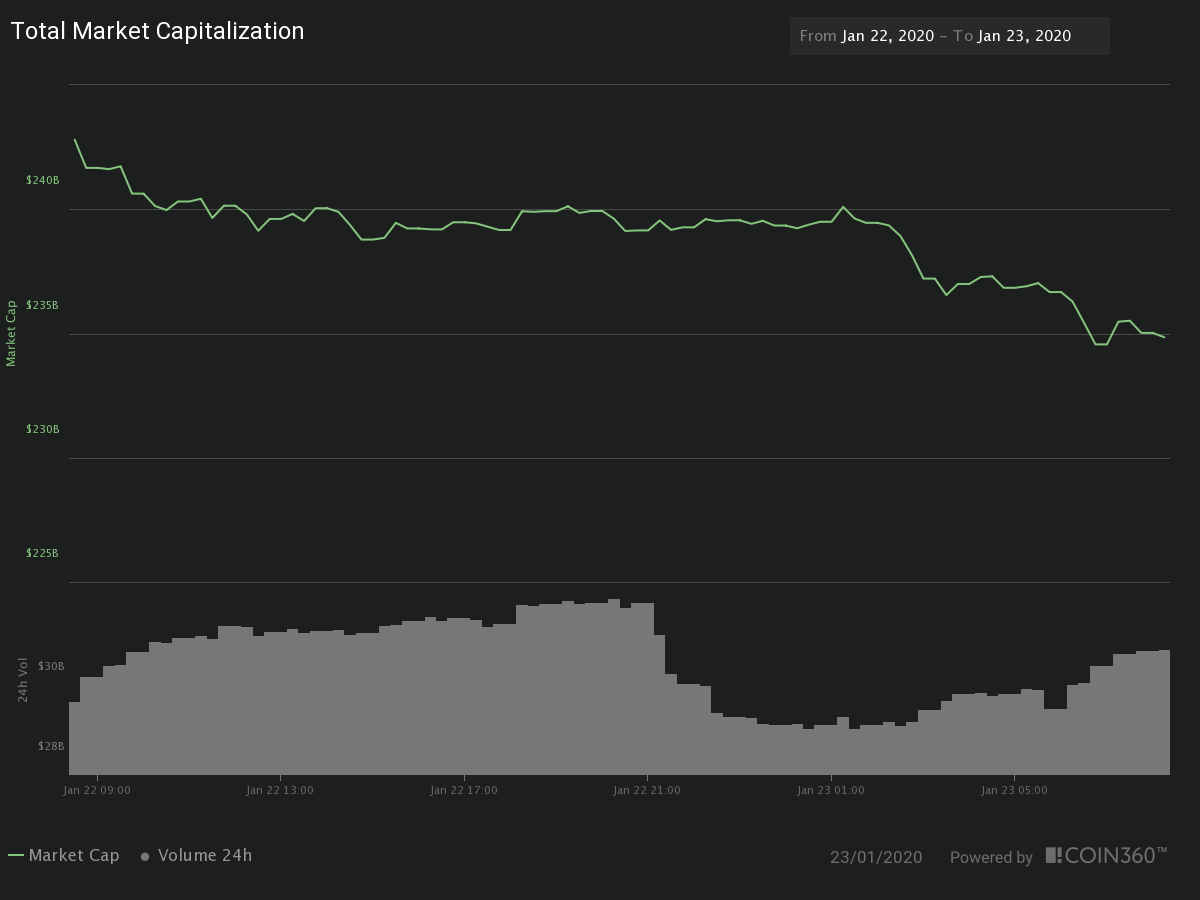 The US SEC doubts about the development efforts on the TON blockchain. That can be derived from its court filing on the NY South District in answer to Telegram's previous motion for summary judgment. "Telegram Has Put Forth No Evidence Regarding the TON Blockchain's State of Development at Launch. Telegram Marketed Few, if Any, Expected Uses for Grams." (source: cointelegraph.com). 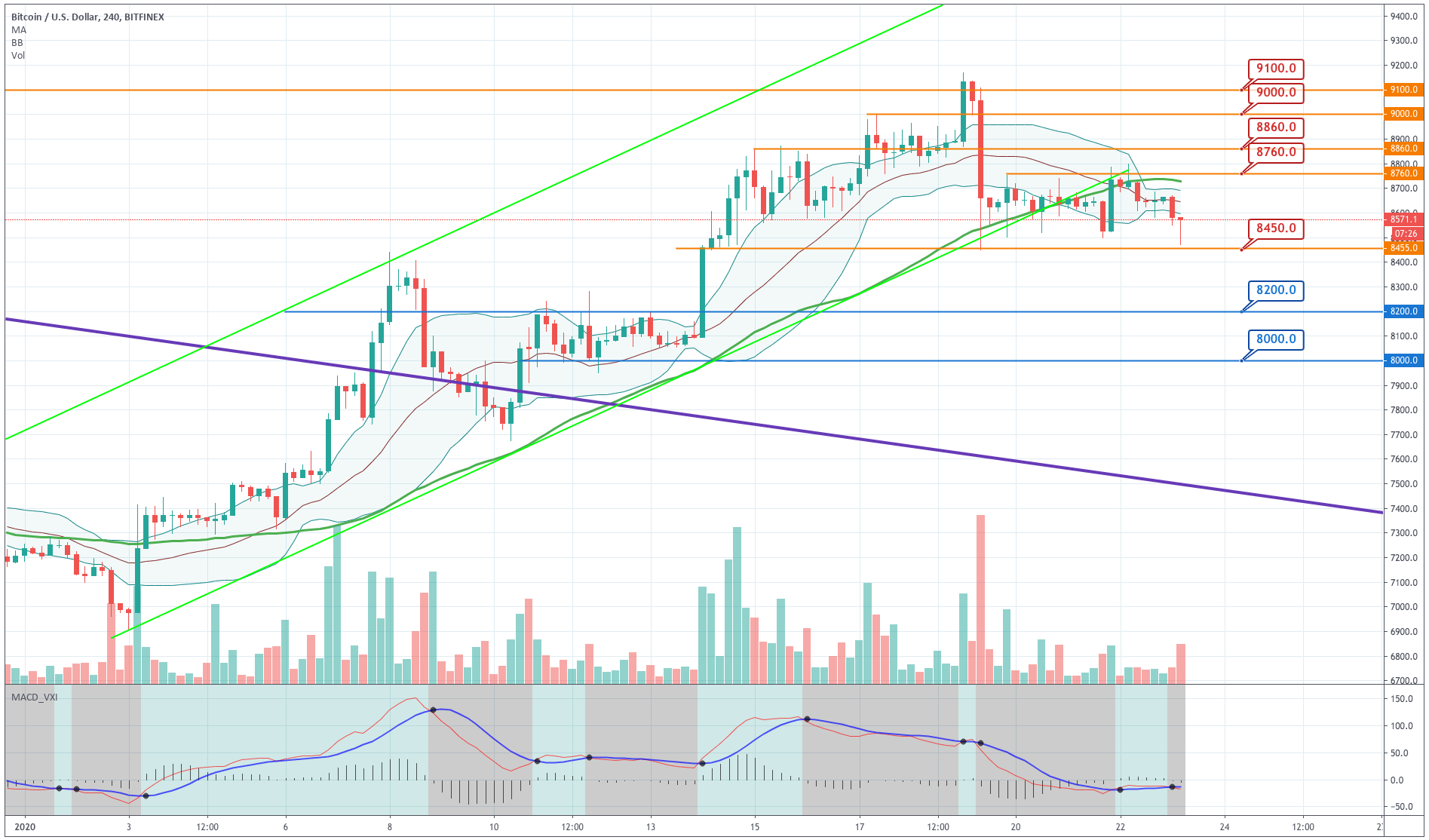 The last four hours of Bitcoin drops brought the digital asset from $8,660 to test its $8,450 low made on Jan 19. There, sellers have managed to create a credible bounce, and now is moving $100 higher. If the bounce manages to last, then Bitcoin has been saved from a potential Head-and-Shoulders pattern that would manifest itself after a break below the $8,450 line.

On the 4H chart, we see that the Bollinger Bands are contracting, which may implicate a sideways action. The MACD is giving no valuable information, as both lines are too close together moving horizontally.

On the negative side, Bitcoin's price has moved out of the ascending channel, and also it is moving below the 50 and 20-periods SMA, and below the -1SD line. The key levels are currently $8,760 and $8,450. 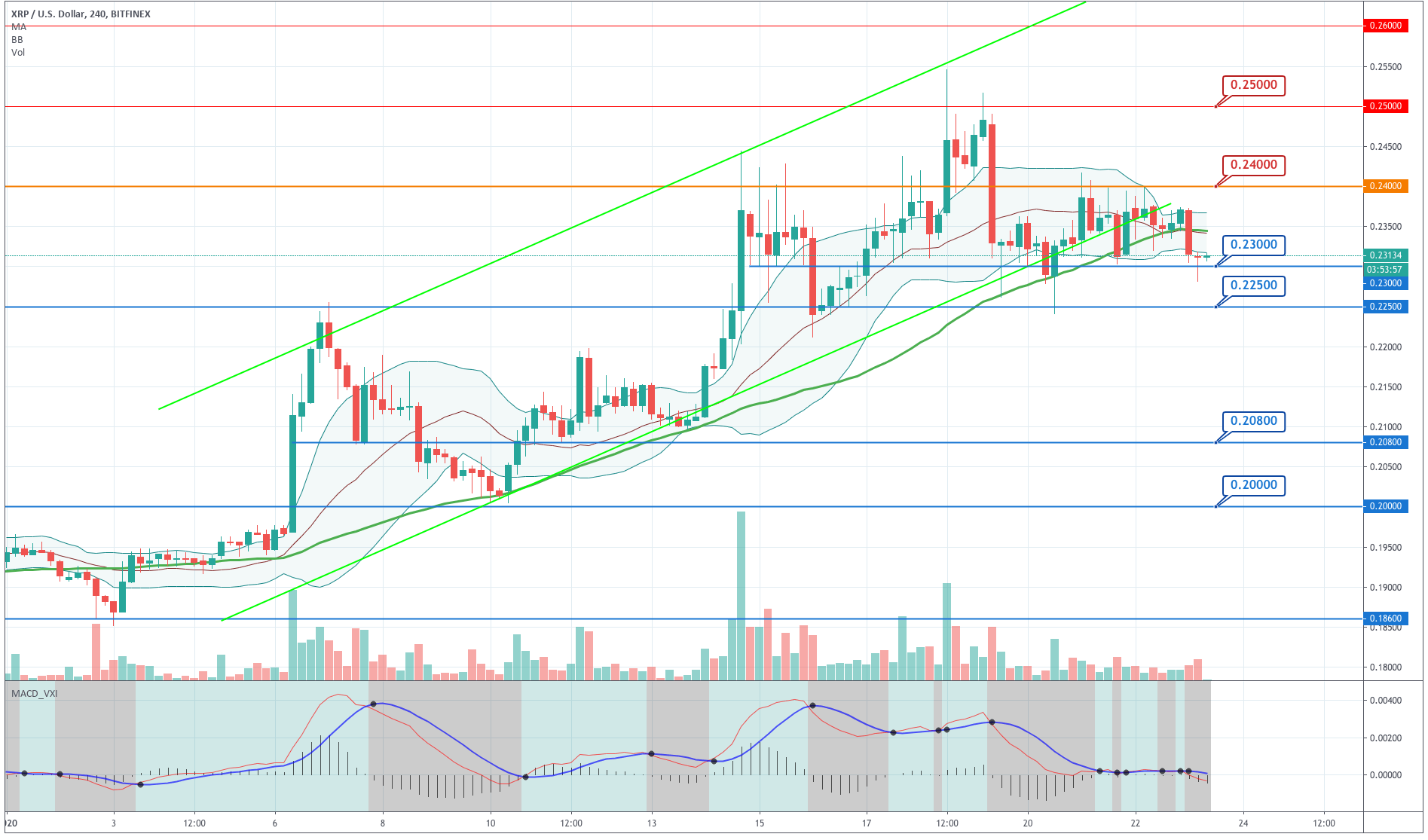 Ripple had a relatively large red candle that was followed by a doji. This candle pierced the $0.23 level and then went back to its origin. Nevertheless, the price continues moving below the -1SD line, and the MACD is bearish. Also, the latest movements pushed the price below its 50-period SMA. If there is no positive reaction soon, the price may continue dropping towards $0.225.   To the downside, the key level is $0.23, whereas $0.24 is the critical resistance to the upside. 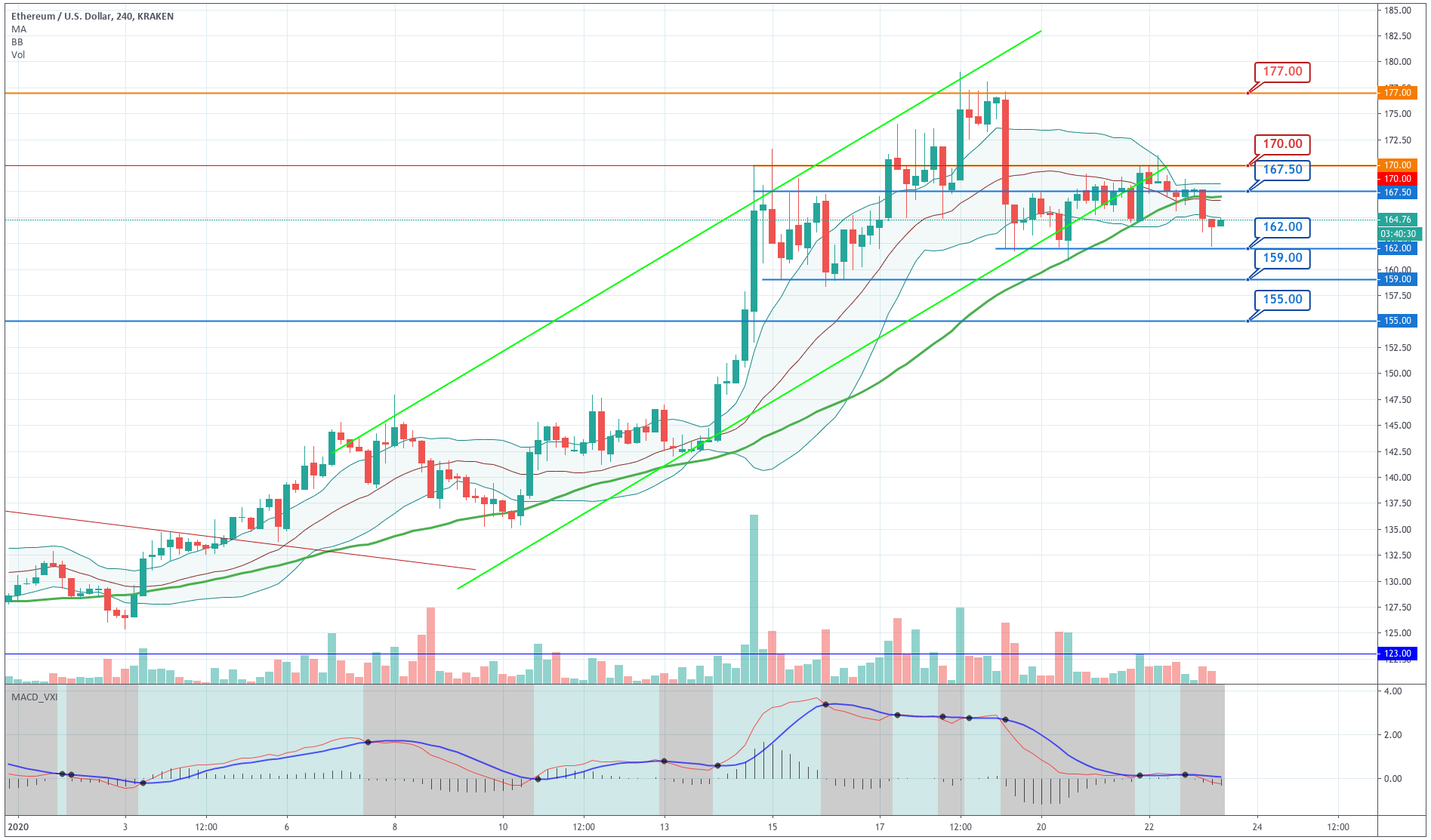 Ethereum is in a similar situation as the rest of the leading cryptocurrencies. After the sharp drop made on Jan 19, the price has been moving horizontally between $162 and $170. In the last eight hours, the selling pressure brought ETH price down to test the $162 level again. From there, it bounced back and now is in the middle of the channel. The Bollinger Bands are shrinking, which means the average trading range has dropped, so a new push to the upside is likely.

The critical levels to observe on this asset were already mentioned: $162 is critical to hold the current uptrend, whereas a pierce through $170 would imply a new upward leg. 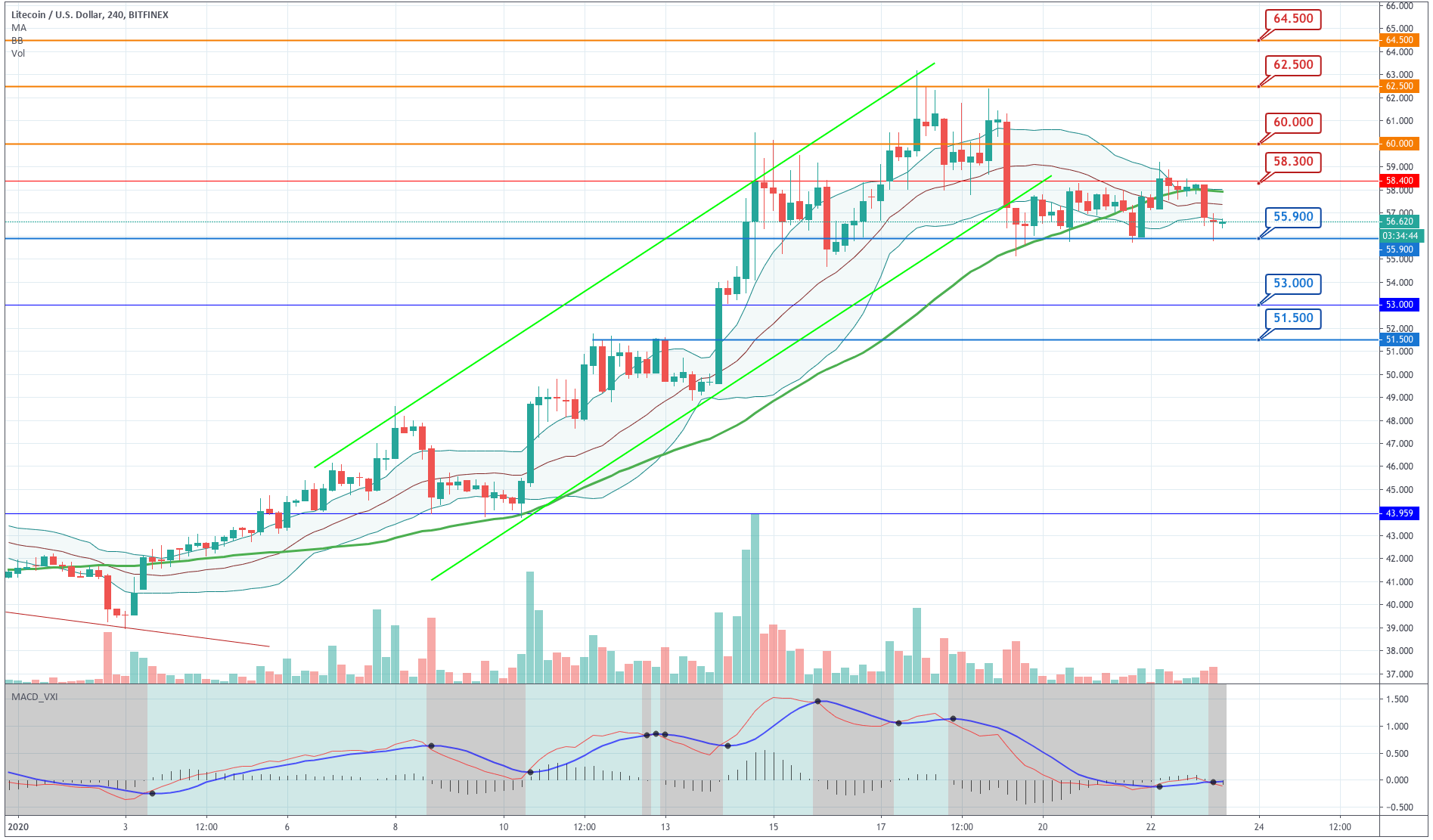 Litecoin is mimicking the movements of the Ethereum, although its price movements seem more bullish since the $55.9 support line has been holding all the time. On the negative side, the price is now below its 50 and 20-period SMA, moving below its -1SD line and a MACD slightly in the bearish side. The Bollinger bands are shrinking, so the likelihood of the continuation of the sideways movement is high. The key levels are $55.9, which is critical to hold for buyers, and $58.3 to the upside.

Maker Price Analysis: MKR whales could be getting ready to dump again at $470

Maker has been one of the most affected coins after the last crypto crash, losing around 50% of its value in practically one month. MKR is currently ranked 37th with a market capitalization of $500 million.

Kyber Network Price Prediction: KNC could be on the verge of a 50% correction

Kyber Network was trading as high as $2.04 on August 14 but plummeted to $1.04 just 22 days later, a 48% loss that clearly shows bears are in full control in the short and mid-terms.

Aave Price Analysis: LEND bulls will have to fight for $0.65 to regain control

Aave's LEND is the 29th-largest digital asset with the current market capitalization of $751 million and an average daily trading volume of $167 million. The token is most actively traded on Binance.