Cardano price looks ready for another drop as it consolidates between two converging trend lines. Interestingly, this pattern is a repetition of the one that formed before the massive drop on October 27. Going forward, investors can expect ADA to pull back.

Cardano has been making headway as they’ve partnered with the Ethiopian government and are infiltrating multiple educational institutions across South Africa. While the adoption is palpable, the blockchain has also undergone a massive makeover over the past few months. The anticipation of the Alonzo hard fork that implemented smart contracts pushed ADA price exponentially, but since then, ADA has come a long way. In a recent AMA, Charles Hoskinson, Cardano founder, addressed key points on post-Alonzo updates like Hydra,  Plutus Application Backend (PAB) and others.

Hydra, the layer-2 scaling solution for ADA, has been in progress since its announcement on September 17. On this note, Hoskinson added that they’ve been working on Hydra implementation, and they are also identifying teams so they can “parallelize the workstream because it's such a high commercial priority.”

Hoskinson anticipates that a massive influx of users will come, and the Cardano blockchain will get “hammered.” For this reason, the founder is pushing toward the implementation of Hydra.

You need to segregate for microtransactions and especially the stuff with world mobile and the telecommunications traffic that's coming because it's 1.8 million users. So Hydra is a necessity for that, it is very important that we get that out in a timely manner.

While Cardano blockchain prepares for the incoming demand, ADA price seems to be heading south.

ADA price set up three lower highs and five higher lows from September 21. Connecting these swing points using trend lines results in a symmetrical triangle formation. This theoretical formation forecasts a 17% downswing determined by adding the distance between the first swing high and swing low to the breakout point at $2.127.

ADA breached the pattern on October 27 and dropped 13% before recovering quickly. Since this point, Cardano price has slid into another consolidation that set up three lower highs and four higher lows. Connecting these swing points shows the formation of another symmetrical triangle pattern.

This setup forecasts a 6% downswing, but a breakout will push ADA to the intended target at $1.767. In a bearish case, ADA could also drop to the $1.680 support floor. 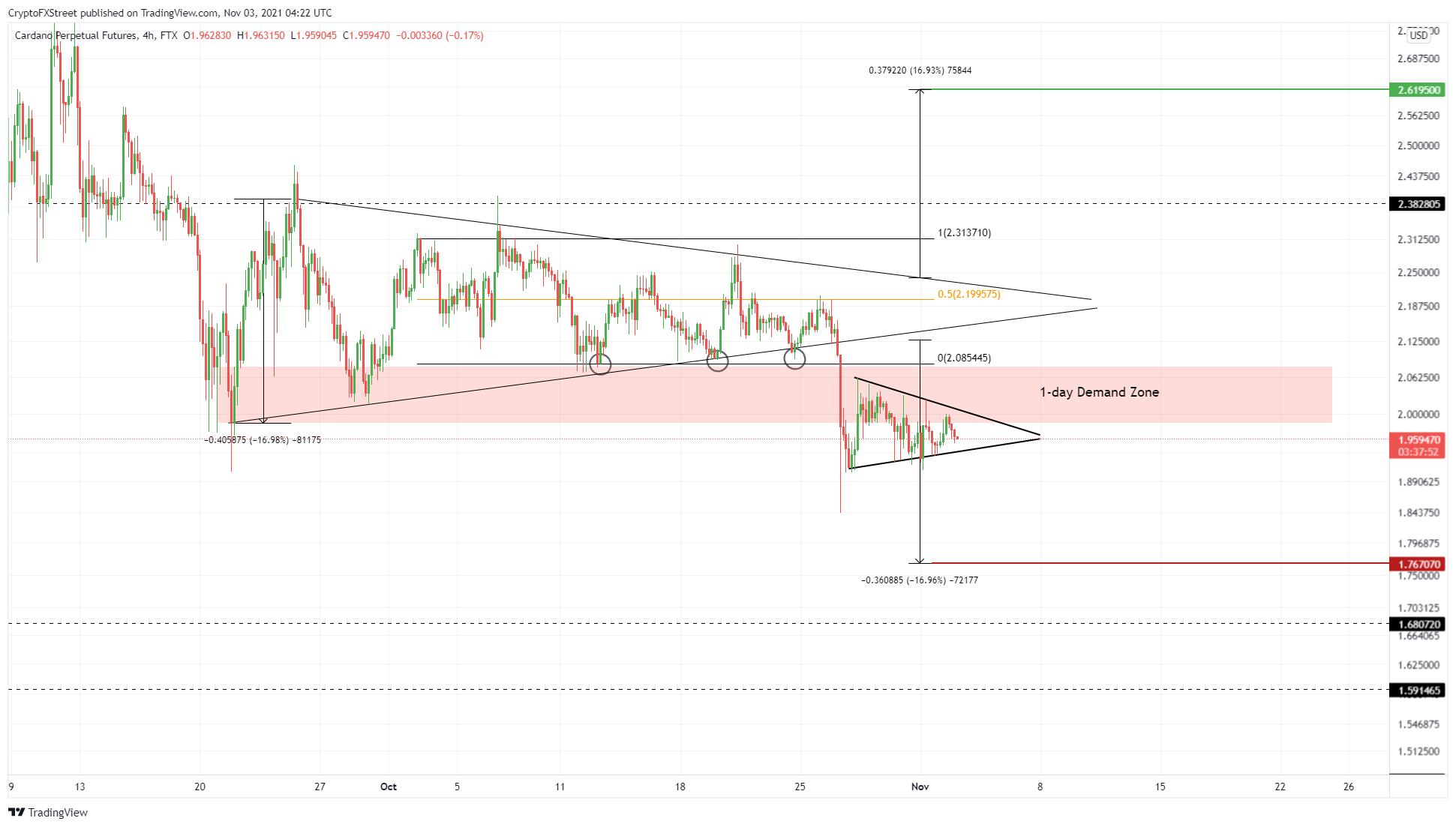 On the other hand, if ADA manages to slice through the $1.985 to $2.079 demand zone, it will indicate a resurgence of buyers.  A daily close above $2.079 will invalidate the bullish thesis and indicate that Cardano price is ready to retest the trading range’s midpoint at $2.200.