It’s been 150 days since China banned Bitcoin (BTC) mining — and BTC price action has only benefited as a result.

Five months ago, China caused a considerable but not unsurprising stir by doubling down on its hostile environment policy toward cryptocurrency.

Bitcoiners to China: Thanks for the ban

Just like every “ban” before it, China’s move against miners saw temporary price turbulence, matching the biggest physical upheaval in Bitcoin’s history.

As miners powered down and relocated out of China, Bitcoin’s network hash rate fell 50%, with difficulty slowly adjusting for the changes in the months that followed.

Since then, however, a powerful renaissance has occurred, and now the network and its security have practically erased any trace of China’s impact. BTC price action, meanwhil, shows a much clearer trend.

“China banned BTC transactions and mining only 150 days ago,” analyst Willy Woo summarized about the episode.

“Today the network is more decentralised than ever and price has risen +50% . Antifragile.”

As Cointelegraph reported, anti-Bitcoin moves by Beijing have ironically led to price increases, not decreases, and 2021 has now proven itself no different.

The hash rate data further shows how China’s absence has improved decentralization, dissolving a weak point that had characterized mining for years. 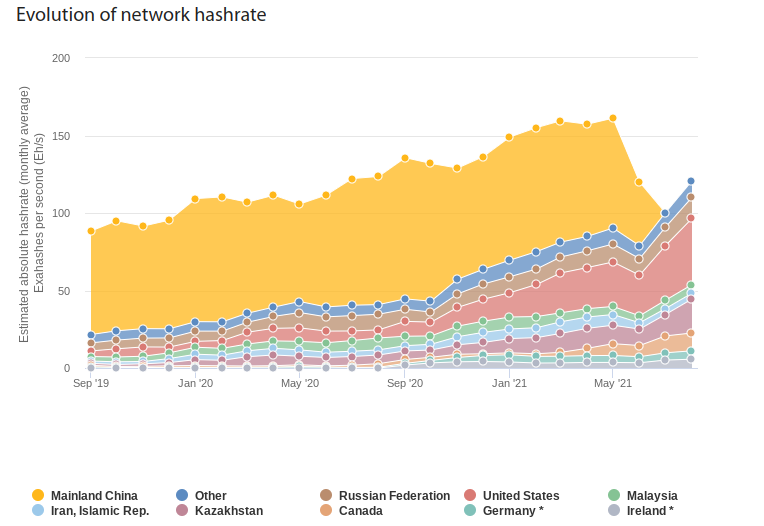 Woo had seen the potential pluses behind the mining ban before BTC/USD had even begun to recover, wryly calling China’s actions “selfless.”

The United States, meanwhile, is now estimated to be the largest participant when it comes to the Bitcoin network hash rate.

Both miners and long-term hodlers alike are refusing to sell at current levels amid anticipation of new highs and a blow-off top of up to $300,000 for BTC/USD.