BSV/USD pushed over 33% higher today after a new development in the "Tulip Trust III" case.

Founder Craig Wright, the self-proclaimed Bitcoin creator sent out a total of 428 documents to the plaintiffs, one of them allegedly including details of a secret trust that holds billions of dollars worth of bitcoin.

Mr Wright’s legal representatives called the paper “Tulip Trust III” and made it confidential. The decision raised suspicions that their client – indeed – was involved in the mining of the first batch of bitcoin alongside his now-deceased partner Dave Kleiman. Bitcoin SV supporters, who expect Mr. Wright to dump part of that bitcoin for BSV, got euphoric on the news. 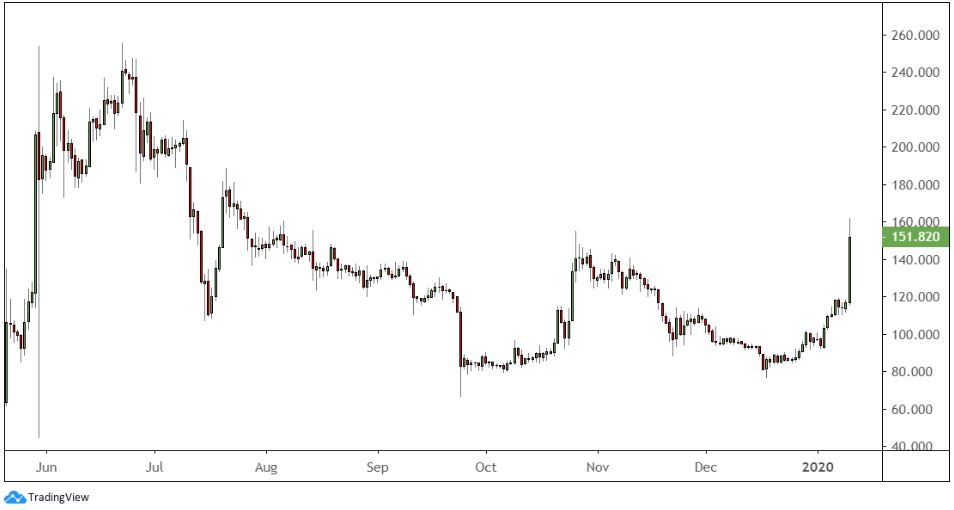 As you can see the price went ballistic on the news. The 150.00 area which was a prominent resistance was broken and 160.00 halted any further moves. Interestingly it looked like a base was forming at around 80 on the chart as it had been used as support on 4 major occasions. Now the bulls could be looking to for the next psychological level of 200.00 as a target.

All information and content on this website, from this website or from FX daily ltd. should be viewed as educational only. Although the author, FX daily ltd. and its contributors believe the information and contents to be accurate, we neither guarantee their accuracy nor assume any liability for errors. The concepts and methods introduced should be used to stimulate intelligent trading decisions. Any mention of profits should be considered hypothetical and may not reflect slippage, liquidity and fees in live trading. Unless otherwise stated, all illustrations are made with the benefit of hindsight. There is risk of loss as well as profit in trading. It should not be presumed that the methods presented on this website or from material obtained from this website in any manner will be profitable or that they will not result in losses. Past performance is not a guarantee of future results. It is the responsibility of each trader to determine their own financial suitability. FX daily ltd. cannot be held responsible for any direct or indirect loss incurred by applying any of the information obtained here. Futures, forex, equities and options trading contains substantial risk, is not for every trader, and only risk capital should be used. Any form of trading, including forex, options, hedging and spreads, contains risk. Past performance is not indicative of future FX daily ltd. are not Registered Financial Investment Advisors, securities brokers-dealers or brokers of the U.S. Securities and Exchange Commission or with any state securities regulatory authority OR UK FCA. We recommend consulting with a registered investment advisor, broker-dealer, and/or financial advisor. If you choose to invest, with or without seeking advice, then any consequences resulting from your investments are your sole responsibility FX daily ltd. does not assume responsibility for any profits or losses in any stocks, options, futures or trading strategy mentioned on the website, newsletter, online trading room or trading classes. All information should be taken as educational purposes only.