Spring, or game over?

After losing some 15% in value of the course of 1 day, Bitcoin is now trading at a new yearly low. What are the implications of this move, did bears finally devalue the leading cryptocurrency, or could this be a Wyckoff spring, and where can we expect support?

Cracking through the yearly low decimated bullish bias. After a resilient battle for support at the $6,100 mark, and expectations of support at $5,700 Bitcoin bears proved to be the dominant force. The sell-off and breakout to the downside from the descending triangle brought price to a new low, during an era of optimism. Expectations were bullish with the launch of institutional vehicles by ICE and NYSE’s BAKKT, as well as potential for SEC ETF approval.

There is no certainty whether the sell-off is indeed over, or if bears gaining momentum is going to result in further price discovery.
AFibonacci extension utilizing the last swing high and subsequent swing low, prior to the extended range trading period, provides the current downside targets.
With price presently having found support at 1.618 level, and trading above, further downside targets are as follows:  $4,983 $4,230 and $3,464. 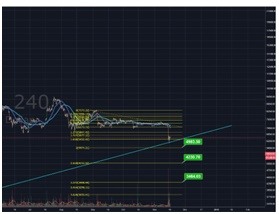 The Spring; a drop in the price which takes it below the lows of trading range (below STs or even selling climax, depending on how deep it was). It’s usually the last attempt of the Composite Man to acquire shares at cheap prices before the mark-up move. Creating selling pressure forces retail traders to think that the current trading range will end in the mark-down movement and exit or reverse their positions. The Composite Man waits for breakout to create enough liquidity and then rapidly covers all available supply resulting in price getting back into trading range.

“The more compact the trading range is, the more likely the stock is under control by professionals, and the greater the possibility for the swift explosive move upward following a spring or shakeout” -Richard D Wyckoff.

The case of a spring here isn’t argued, just presented. As historically every Bitcoin rally has come following a degrading sell-off in the form of a shakeout, or spring.
The nature of Bitcoin’s chart, regarding the lack of volatility and the constricted trading range over the past 2 months makes a case for BTC being under control of professionals. And potentially classifies that era as a “creek”.

As of current, the case can be argued in favor of bears, as long-term moving averages are converging into further death crosses. Yet the likelihood of this downside move into new yearly lows being a spring or a shakeout is plausible, yet probability of this being the case cannot be confirmed as of yet. Most importantly futures traders are elated, as Bitcoin volatility is back. Properly hedged traders trading both sides leveraging futures contracts long vs short with defined stops will conquer the next move.

Any opinions, news, research, analyses, prices, predictions, or other information contained in our publications is provided as general market commentary and does not constitute investment advice. George Saber and Coin Observatory LLC will not accept liability for any loss or damage, including without limitation to, any loss of profit, which may arise directly or indirectly from use of or reliance on such information.