BTC Markets, an Australian crypto exchange, revealed that baby boomers are starting to get on board with the idea of “digital gold” in their recent investor report. People born between 1946 and 1964 are commonly known as baby boomers, and they now constitute about 5% of the exchange’s customers.

The over 65-year-olds trade more frequently than those five years younger – at four times a day – and platform user growth for this age bracket has grown by 15 percent.

Touching on the sudden increase in investors of the age bracket mentioned, the exchange stated,

As baby boomers, they have accumulated assets and disposable income, so are not worried about allocating a percentage of their portfolios to cryptocurrencies. This approach takes advantage of the upside, while not being too intimidated with the downside.

On the note of investing in Bitcoin, MicroStrategy purchased an additional 5,050 worth $242.9 million. The recent addition to their coffers brings its total holdings to 114,041 BTC or 0.543% of 21 million BTC.

While institutions are happily investing in BTC, the mining company Canaan recorded $167.5 million in revenue and $66.2 million net profit, which is the highest quarterly gain since its public listing in 2019.

The Q2 revenue is 168% higher than Q1 revenue for 2021 but 500% greater than the 2020 Q2 numbers. This growth shows the rising interest among institutions toward mining and also indicates the adoption of BTC.

Keeping track of the latest developments and new projects seems overwhelming in the ever-changing and burgeoning cryptocurrency ecosystem. Evidence of this can be seen with Morgan Stanley, one of the largest financial institutions in the world, launching a cryptocurrency research division.

The research group is headed by Sheena Shah, the bank’s lead currency strategist. This decision is an effort from the financial institution to recognize the significance of cryptocurrencies in global markets.

A decisive daily close above the psychological level will instill confidence among investors and kick-start an uptrend that will recover the losses caused after the September 7 crash and propel BTC to explore the Fair Value Gap (FVG) ranging from $51,483 to $56,361.

In a highly bullish case, the big crypto could extend this run-up to retest the next psychological level at $60,000 or the all-time high at $64,854. 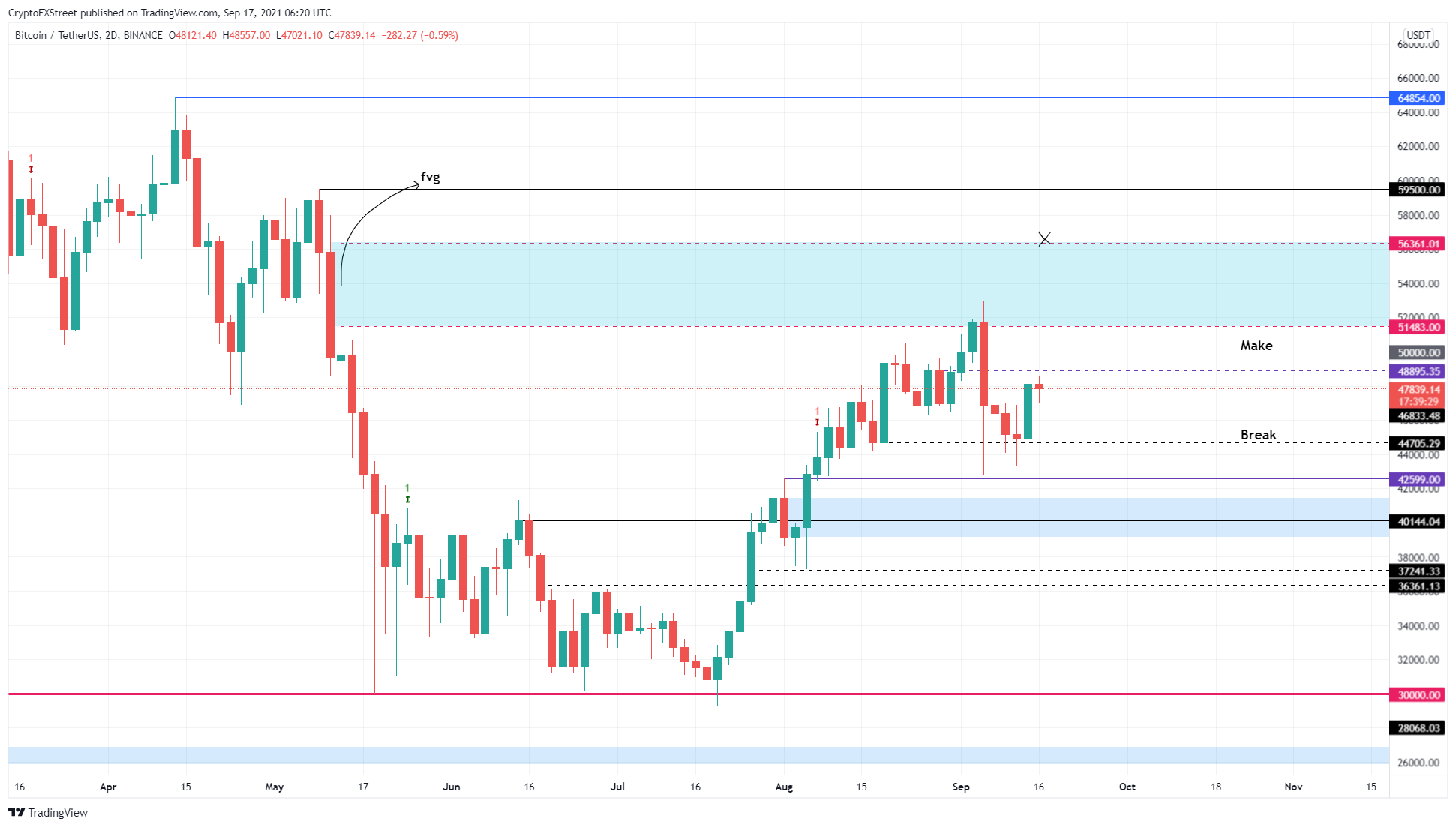 Mildly supporting this bullish outlook is the reset of the 365-day Market Value to Realized Value (MVRV) model to 18%. This fundamental index tracks the average profit/loss of investors that purchased BTC over the past year.

A high MVRV number indicates that many holders are in profit, which poses a risk of sell-off. However, the September 7 crash reset the 365-day MVRV for BTC from 30% to 18%, which removed the latent sell-side pressure.

While the MVRV ascertains that a massive sell-off is unlikely, the supply on exchange metric portrays the long-term outlook for BTC as bullish. Roughly 110,000 BTC left known centralized entities, suggesting that investors are confident about BTC price performance.

Further adding optimism to the above narrative is the miners’ position index (MPI). CryptoQuant defines this index as “the ratio of BTC leaving all miners’ wallets to its 1-year moving average. Values above 2 indicate most miners are selling.”

A low MPI suggests that the miners are not selling their Bitcoins since they expect a bullish outlook.

While the optimistic scenario makes sense, a potential spike in selling pressure that knocks Bitcoin price below $47,869 will be bearish, according to IntoTheBlock’s Global In/Out of the Money (GIOM) model.

Here, roughly 2.18 million addresses purchased 1.1 million BTC. Therefore, a decisive close below the average buy-in price of these investors will put them “Out of the Money” and might induce a sell-off to the next stable support floor at $44,705.

However, if the buyers fail to make a comeback here, BTC is likely to revisit the $41,000 barrier, where GIOM shows nearly 4.65 million addresses purchased 2.92 million BTC.

In a worst-case scenario, if Bitcoin price slides below the $44,705 foothold, it will invalidate the bullish thesis and drag the pioneer crypto to revisit the demand zone ranging from $41,461 to $39,147.