Earlier this week, on Monday 8, we found out that Tesla Inc, bought $1.5 billion worth of Bitcoin. Additionally, the electric-vehicle company also said it will start accepting Bitcoin as a payment option in the near future.

Congratulations & thank you to @elonmusk & @Tesla on adding #Bitcoin to their balance sheet. The entire world will benefit from this leadership.https://t.co/FVTepBqAI2

Right after the announcement, the flagship cryptocurrency exploded from a low of $37,988 to a new all-time high at $46,794 which was broken four days later on February 12 when Bitcoin price reached $48,985.

The digital asset surpassed $900 billion in market capitalization for the first time ever, close to $1 trillion. This fact seems to have caught the eye of big institutions as on February 11, the oldest American bank. BNY Mellon announced a new service of Crypto Custody. The custodian bank holds around $41 trillion in assets and is moving into crypto.

BREAKING: BNY Mellon, the oldest bank in America, just announced they are going to custody bitcoin for their clients.

Eventually every company will join the revolution.

BNY Mellon expects to launch a new digital custody unit this year as they have experienced a lot of demand from clients. Mike Demissie, head of advanced solutions at BNY Mellon stated:

The platform we have built would service any of those assets. It will be driven by client interest and demand, and we also stayed tuned to regulatory activity to make sure we are supporting assets that are allowed in a particular market.

It seems that banks, institutions, and other platforms are rushing to get into Bitcoin or support the digital asset. Mastercard has also recently jumped on the bandwagon and announced that it will support certain cryptocurrencies directly on its network later this year. Raj Dhamodharan, executive vice president at Mastercard made the following statements:

Our philosophy on cryptocurrencies is straightforward: It's about choice. Mastercard isn't here to recommend you start using cryptocurrencies. But we are here to enable customers, merchants and businesses to move digital value — traditional or crypto — however they want.

The first major payment application that started to support Bitcoin, PayPal, will roll out its crypto business into the UK market, thanks to the Venmo application. The platform plans to roll out the new service later this year, probably in the first half.

The good news doesn’t stop there as RBC Capital Markets, a global investment bank, has suggested Apple to support cryptocurrencies on its Wallet app, which would allow the company’s stock to surge by another 25%.

This was a note sent to clients from RBC analysts which increased their price target for Apple to $171. According to RBC, there is more potential in cryptocurrencies than electric cars, which has been the main focus of Apple in the past few months.

Why are so many companies, banks, and businesses supporting Bitcoin when it just hit a new all-time high? According to Citibank, BTC could reach $318,000. A Citibank leaked report states that Bitcoin could reach this number by December 2021 which suggests that the narrative for institutional buyers has shifted in favor of digital assets.

We have recently found out that Andrew Yang, former Democratic Presidential Candidate, will run for Mayor of New York City, the world’s financial capital. According to Yang, if he gets elected, he will fight to make the city a ‘hub for BTC and other cryptocurrencies’. Yang is known for being pro-Bitcoin and supports cryptocurrencies in general.

On the weekly chart, there is only one resistance barrier ahead, the previous high of $48,985. The psychological level at $50,000 can also be significant. Using the Fibonacci Retracement indicator, we can find out several potential price targets for Bitcoin in the future. 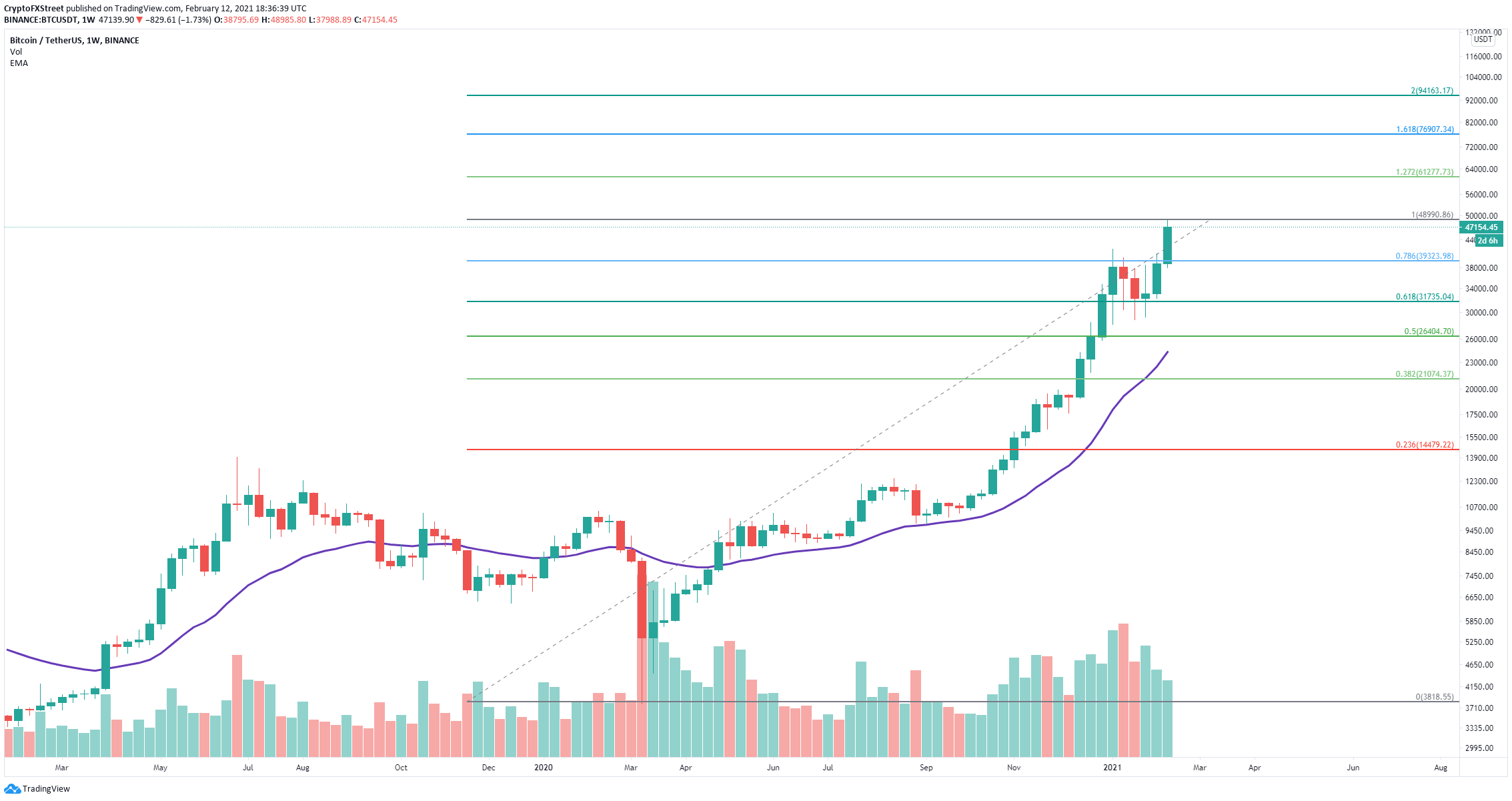 Another interesting bullish on-chain metric is the percentage of Bitcoin inside exchanges. Since January 11, at 10.5% of the current circulating supply inside exchanges, this number has dropped to a low of 10.06% currently despite Bitcoin price hitting new all-time highs, indicating that investors are not keen to sell just yet.

However, if Bitcoin does eventually see a massive correction, the Fibonacci Retracement tool can serve as a potential guide. The nearest support level is located around the psychological level at $40,000, which coincides with the 78.6% fib level. Losing this point would quickly push Bitcoin price down to $31,735 at the 61.8% level.

The key support level for Bitcoin bulls is the 26-EMA, currently located at $24,269. This level hasn’t been lost since April 2020 and serves as a long-term guide.

Ethereum Classic price has not accomplished anything since claiming the 2018 high on July 24, showing a 3.60% gain over the last nine days. The lack of price traction stands in contrast to the unstoppable advance for ETH over the last 13 days.

AXS price sows doubt, yet Axie Infinity has the swagger for higher prices

AXS price climbed 183.75% from May 21 to May 23, easily besting any previous three-day rally since 2020 and carry the cryptocurrency to the 461.8% extension of the April-May correction. Over the last ten days, Axie Infinity has fallen -6.23%, leaving doubt about the potential to continue ...

SafeMoon Price Prediction: SAFEMOON drops 27%, but any rebound should be sold

SafeMoon price shaped a descending triangle pattern since the May collapse, with the May 19 low of $0.00000261 serving as the horizontal support for the triangle. Finally, on July 28, SAFEMOON logged a daily close below the May 19 low.

Bitcoin price ends three-month decline with a compelling 18.35% gain in July while Ethereum price is working on a historic 13 consecutive up days. XRP price closed last week with the best weekly return since the end of April.