Bitcoin SV (BSV) experienced a strong rally on Tuesday and extended the upside on Wednesday morning. The 11th largest coin with the current market capitalization of nearly $2 billion has grown by over 73% in recent 24 hours and hit a new all-time high at $195.00 during early Asian hours. An average daily volume also exploded and exceeded $800 million, which is four times bigger than on average. At the time of writing, BSV/USD is changing hands at $115.00.

As it was previously covered, BSV's rally might have been inspired by the news that Craig Wright had secured Bitcoin's Whitepaper registration copyright. While many community members believe that the copyright claim is somewhat ridiculous, it produced a viral effect. Meanwhile, an article published by Coingeek inflated its importance, stating that Craig Wright had confirmed his status as Bitcoin creator.

Whether the move is just a FOMO effect or a real shift in the attitude remains to be seen. However, looking technically, BSV/USD is vulnerable to the downside correction as the g=coin is grossly overbought. The first critical support lies with $100.00 handle. Once it is cleared, the sell-off is likely to gain traction with the next focus on $85.00 and $75.50 (Simple Moving Average (SMA)50 1-hour). 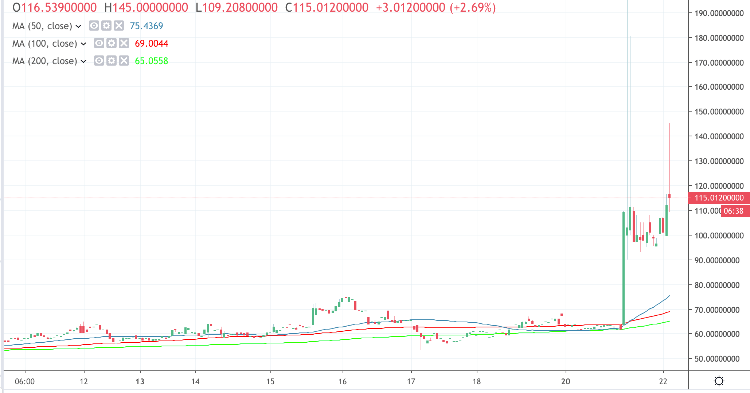