Since August 10, BTC has been squeezed in a narrow range of around $11,400 and so far it experiences difficulties with determining the further direction. The current price dynamics is taking place against the background of the decline in trading volumes: according to CMC, over the last 7 days they have fallen by 42%. This may indicate a temporary loss of interest of investors, who prefer to stay aside waiting for new impulses.

Later on, Bitcoin has several development scenarios. The optimistic one, with higher lows and higher highs, suggests that the current situation may be as it was in September-October 2017, when the cryptocurrency for some time rolled back before spiking to a historical high around $20,000. The launch of delivery BTC futures, with a new round of escalation of the trading war, stock collapse or tightening of the geopolitical situation, can create conditions for such an impulse of growth of Bitcoin, which will resist sharp take profits by large investors. 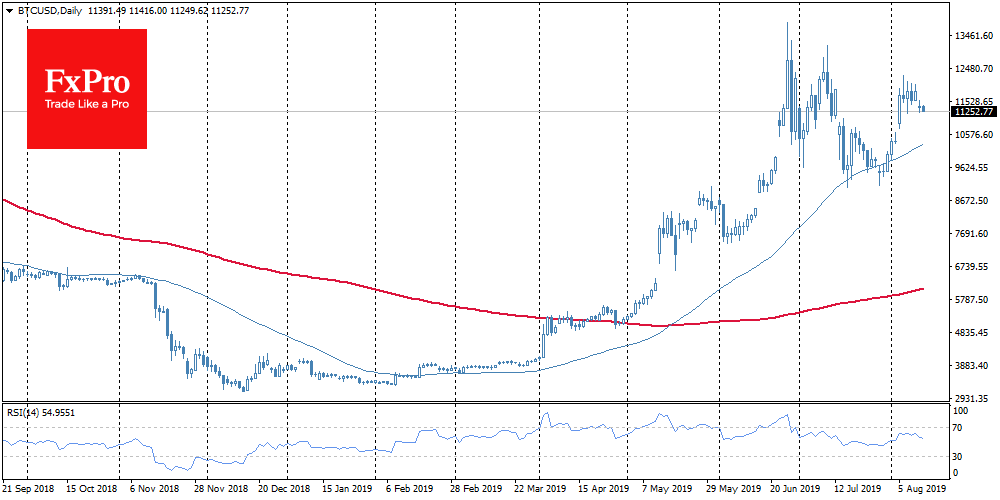 The pessimistic scenario suggests that the bullish impulse has already run out. Regulators are consistently postponing the consideration of applications for the launch of various Bitcoin investment instruments. Large capital and scalpers prevent bullish impulse from developing into a full-fledged rally, fixing profit after relatively small (by Bitcoin standards) price hikes. Crypto-enthusiasts and retail investors are finally losing leverage on price dynamics due to the presence of major players in the market. Such a long tug-of-war has a negative impact on sentiment and runs the risk of turning into a decline in BTC.

The neutral scenario implies that Bitcoin will be caught in the range of $9-$13K for a long time. As we approach halving in May 2020, market participants will start pushing up the benchmark cryptocurrency, as was the case with Litecoin (LTC): that soared by 370% before halving. In the case of Bitcoin, the growth amplitude may be much weaker, as the starting price point of the "halving rally" may not be as low as it was in the case of Litecoin.

Meantime, the traditional global financial system is moving into a very worrying direction. In addition to increasing technical and trade isolation, central banks want to get full control over the flow of funds within the country and are particularly interested in foreign transactions. In this case, the emergence of "national cryptocurrencies" and the conversion of all settlements into the non-cash form will be a natural step in the evolution of the monetary system. China will be a pioneer in this area, as the country is approaching the launch of its first "state cryptocurrency". As with all other technical innovations, the country has banned all foreigners and is developing its own "autocratic analogue". 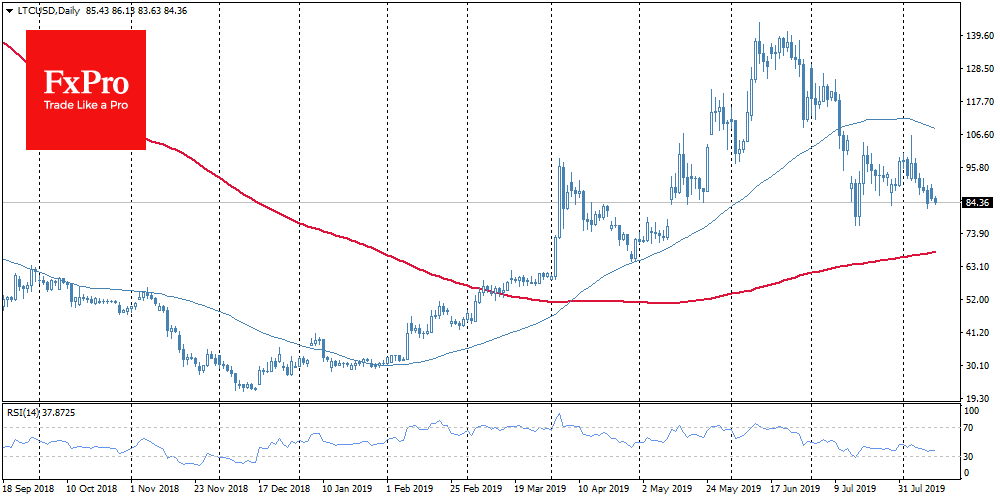 As sad as it may be to admit, the emergence of Bitcoin and "Satoshi's vision" of financial interaction without intermediaries may lead to the exact opposite result: it is the cryptocurrencies that will deprive people of any anonymity in spending and give governments unlimited monetary power.

Bears take over and draw a bloody moon

Cryptographer and computer scientist Nick Szabo, has presented in his Twitter account a study on the "risk-benefit" ratio of different assets. The study used a Sharpe Ratio over four years Hodl period.

Ripple's CEO sees an era of IPO in cryptocurrency industry

Ripple's XRP, the third-largest digital asset with the current market value of $9.4 billion has lost over 5% in recent 24 hours and hit the low of $0.2136 on Friday. XRP/USD is moving within a clear bearish trend amid expanding volatility.

The Crypto Sector in selloff mode searches a support zone

Most of the cryptocurrency sector accelerated the losses after breaking the neckline of support that was holding their prices. The selling pressure was in almost all digital assets.

The cryptocurrency market started the downside correction after a strong rally initiated by risk reversal play at the beginning of January and reinforced by various altcoin pumps...