Bitcoin price trend has witnessed fluctuations over the past week whilea key mining metric has reached a new all-time high. Analysts are bullish on BTC price recovery as more miners join the network.

Bitcoin price could witness a recovery on one condition

Analysts at BitMEX recently published a report anticipating that the computational power used to mine Bitcoin, or hashrate, was going to see a massive increase by the end of 2022. Coincidentally, legislators of Fort Worth, Texas, started debating on a bill that seeks to position the city as “crypto-friendly" and "welcoming to the industry."

The city also aims to lure in "businesses contributing to the development of this evolving technology.”

As big players enter the mining industry, Bitcoin’s hashrate recently hit an all-time high of 247.39 Exahash per second (Eh/s). The new peak indicates that a high number of miners have joined the network for its rewards, which helps strengthen the BTC blockchain against any vulnerability. 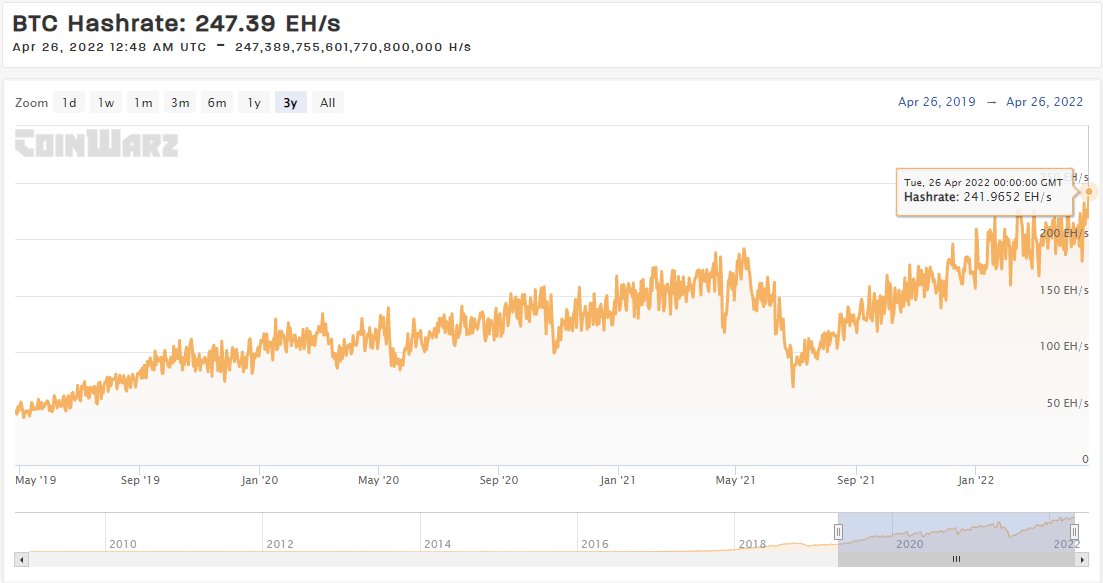 Interestingly, the rising hashrate also reveals capital inflow in the Bitcoin mining industry, which analysts compare to the gold rush of the 1880s.

Despite the rising interest in Bitcoin mining, the market value of the pioneer cryptocurrency continues to fluctuate. BTC price dropped below $38,000 on Monday, April 25, as uncertainty grows in the global financial markets, but was able to recover above $40,000 as of Tuesday, April 26. .

As the Bitcoin network becomes more secure and a higher number of institutions and miners join the BTC blockchain, the sudden price movements are expected to reduce based on historical data.

@rektcapital, a pseudonymous crypto analyst, evaluated the Bitcoin price trend and observed that BTC is currently holding the 2022 higher low at $40,325 as support. Continued support could push the Bitcoin price to revisit the $43,100 resistance level.