Proponents draw parallels between the Bitcoin price trend and the historic bull run in 2017 before the all-time high. Similar movements in BTC price are seen supported by SMA and Fibonacci levels. Bitcoin accumulation across exchanges continues, in sharp contrast to the 2017 bull run.

Ahead of the parabolic Bitcoin price rally where BTC hit a new all-time high above $19,000, the accumulation was at a similar position as observed in the ongoing bull run. Bitcoin price made a comeback from the drop below $55,000 and gained 6% overnight.

Except for May to July 2021, Bitcoin exchange balances continued to drop in the ongoing cycle. More Bitcoins were scooped off of exchanges in the recent dip, and this was in sharp contrast to the 2017 cycle, where BTC started flooding exchanges once the price rally started.

Bitcoin net position change is an indicator that measures the total inflow/ outflow of BTC across exchanges as a moving average for the past two weeks. A net outflow is considered a bullish sign for Bitcoin price. 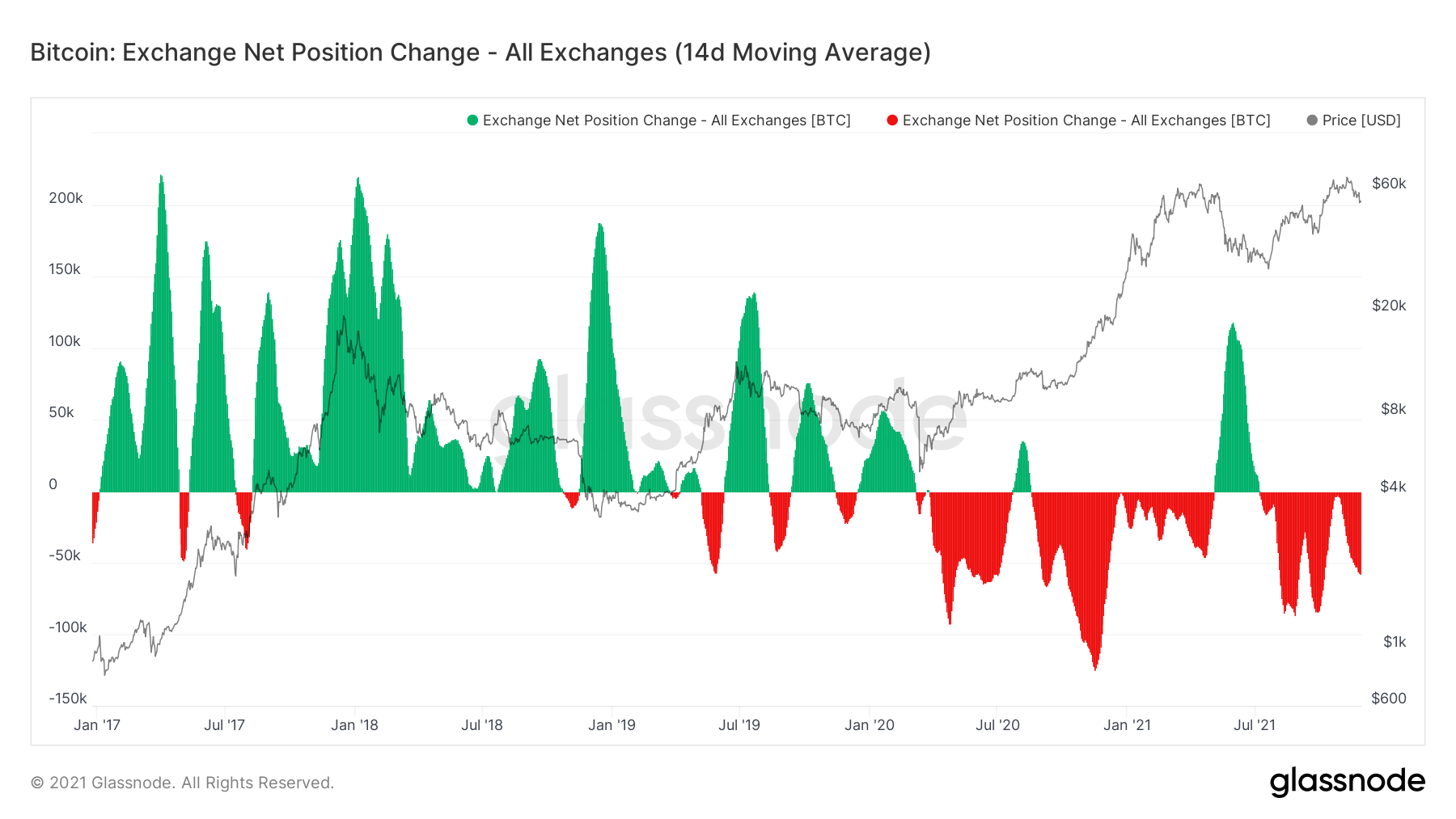 Despite “Extreme Fear” on the “Fear and Greed Index,” considered an indicator of traders’ sentiment on a scale of 0 to 100, buyers stocked up Bitcoin at $53,000.

Pseudonymous cryptocurrency analyst and trader @bloodgoodBTC has set a target of $170,000 for Bitcoin price. The analyst observed BTC accumulation and noted that it was supported by his analysis of SMA and Fibonacci levels.

Accumulating in a similar position then it was in 2017 before the parabolic rally.

The same movement is seen now supported by SMA and Fibonacci.

Even if we test $49k, we are still ridiculously bullish. pic.twitter.com/xq4pt24qWU

Bitcoin’s drop below $55,000 was a 21% drawdown from its all-time high, one of the least severe corrections noted in 2021. @_Checkmatey_, a cryptocurrency analyst, concludes that Bitcoin is not in a bear market yet as the drawdown is one of the lowest ( when measured from the latest all-time high ).

TradFi: #Bitcoin is in a bear market!

Bitcoiners: nope, just another day in the office. https://t.co/65zlGvZPW0

FXStreet analysts have evaluated the BTC price trend and predicted a drop to $53,000 where the asset would collect liquidity.