What looked set to be a down day for bitcoin is turning positive, courtesy of renewed speculation that the U.S. could soon approve exchange-traded funds (ETF) on futures linked to the top cryptocurrency.

Bitcoin has gained 4.5% to trade near $43,400 one day after exhibiting bearish price action. The cryptocurrency failed to keep gains above $42,000 on Wednesday, hinting at further weakness.

However, the cryptocurrency picked up early today, possibly in response to the U.S. Securities and Exchange Commission (SEC) Chair Gary Gensler reiterating support for a narrow class of bitcoin ETFs that would invest in futures contracts instead of buying the cryptocurrency directly. “There is some newfound optimism around the launch and approval of an ETF in the U.S,” said Matthew Dibb, COO and co-founder of Stack Funds.

Canada’s decision to approve a multi-cryptocurrency ETF that holds bitcoin and ether may have added more impetus to the advance. The U.S. SEC’s final verdict on several bitcoin ETF applications and a first response on futures-based ETFs is due next quarter.

The consensus in the crypto market is that an ETF would become the most important source of demand from yield-hungry institutional and traditional market investors. The first gold-backed ETF in the U.S., the SPDR Gold Trust, was launched on Nov. 18, 2004. Since then, the metal’s price has developed a strong link with the SPDR trust flows.

Data from ByteTree Asset Management show bitcoin ETFs and funds currently own around 801,000 BTC, amounting to 4.3% of the total supply. “Holdings ballooned from 250,000 in 2019 to 800,000 today and helped drive the bitcoin bull market from $5,000 to $64,0000, before flattening off,” ByteTree Asset Management’s CIO Charlie Morris said in the latest ByteTree Market Health Update published Wednesday. 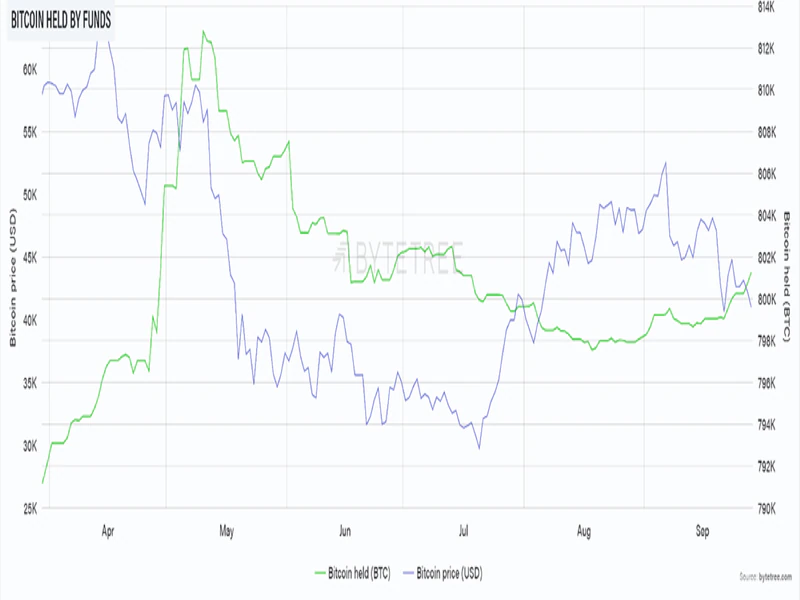 The ETFs have amassed just over 3,000 bitcoin over the past four weeks. Blockchain data shows large traders have accumulated coins during the recent price dip in a sign of confidence in bitcoin’s broader bull run.

Stack Funds’ Dibb said, “We are experiencing some end-of-month buying before the quarter is closed. We may see this continue over the next few days as funds take on new investor subscriptions.”

The bullish sentiment is also evident from thick bids stacked around $40,000 on crypto exchange Bitfinex, as analyst Cole Garner tweeted.

However, prospects of tighter Federal Reserve policy, the U.S. debt uncertainty, and the ongoing dollar rally could cap gains.

The 60-day rolling correlation between the greenback and bitcoin has dropped to -0.33, the strongest negative reading since March, according to CoinDesk 20 data. 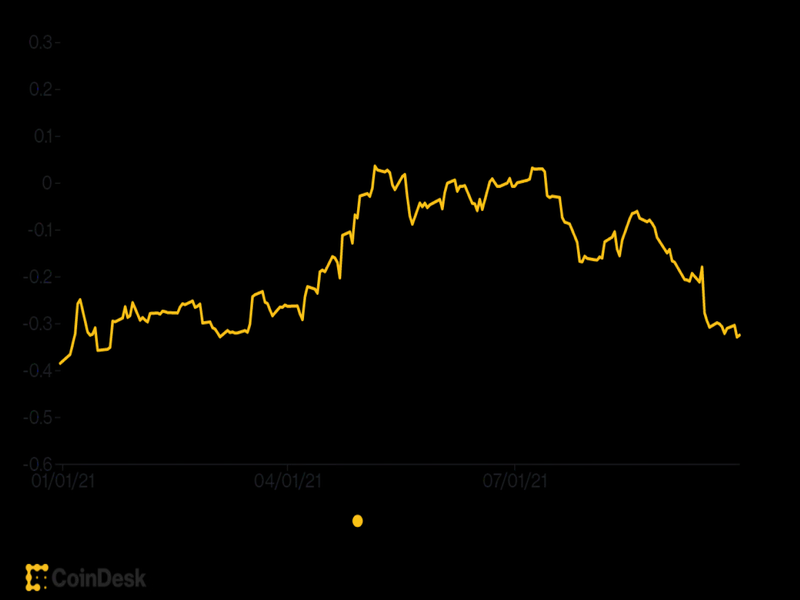 The dollar index, which tracks the greenback’s value against major fiat currencies, rose to a 12-month high of 94.40 early today, tracking a rise in the U.S. Treasury yields.