While the first Bitcoin exchange-traded fund (ETF) is about to be launched, cryptocurrency investment products witnessed inflows of $80 million last week, reaching the highest total assets under management recorded.

The first Bitcoin ETF is set to begin trading on the NYSE on October 19, marking a significant milestone in the digital asset industry. The ProShares Bitcoin ETF will invest in BTC futures contracts that would give investors exposure to the leading cryptocurrency without holding the underlying asset.

Bloomberg ETF analyst Eric Balchunas predicted that another Bitcoin futures contract-based ETF, the Valkyrie Bitcoin ETF, will likely launch later this week after being certified for listing on the Nasdaq exchange last week.

Balchunas also highlighted that Valkyrie updated its ticker from BTFD to BTF in its application, another sign that a fund is ready for launch. If the analyst's prediction is correct, Valkyrie’s fund will be the second BTC ETF to launch in the United States.

While optimism surrounds the positive development of the first Bitcoin ETF being approved in the United States, Invesco withdrew its application for a futures-based BTC ETF on October 18.

The approval of the first Bitcoin ETF also led to a rise in bullish sentiment in the cryptocurrency market, as digital asset investment products witnessed inflows of $80 million last week. Total assets under management have reached $72 billion, the highest level recorded.

Bitcoin dominated inflows, resulting in a total of $70 million recorded, marking the fifth consecutive week of inflows for the leading cryptocurrency. According to the report by CoinShares, the recent decision by the SEC to approve a Bitcoin ETF could prompt further significant inflows in the coming weeks as American investors begin to add positions.

Bitcoin price is rising steadily as the launch of the first BTC ETF approaches in the United States. The leading cryptocurrency continues to climb within an ascending parallel channel pattern on the 4-hour chart.

The bellwether cryptocurrency could tag the upper boundary of the chart pattern at $65,742, should buying pressure continue to rise.

However, the Arms Index (TRIN), which gauges overall market sentiment, suggests that currently there is more selling activity than buying activity in the BTC market. 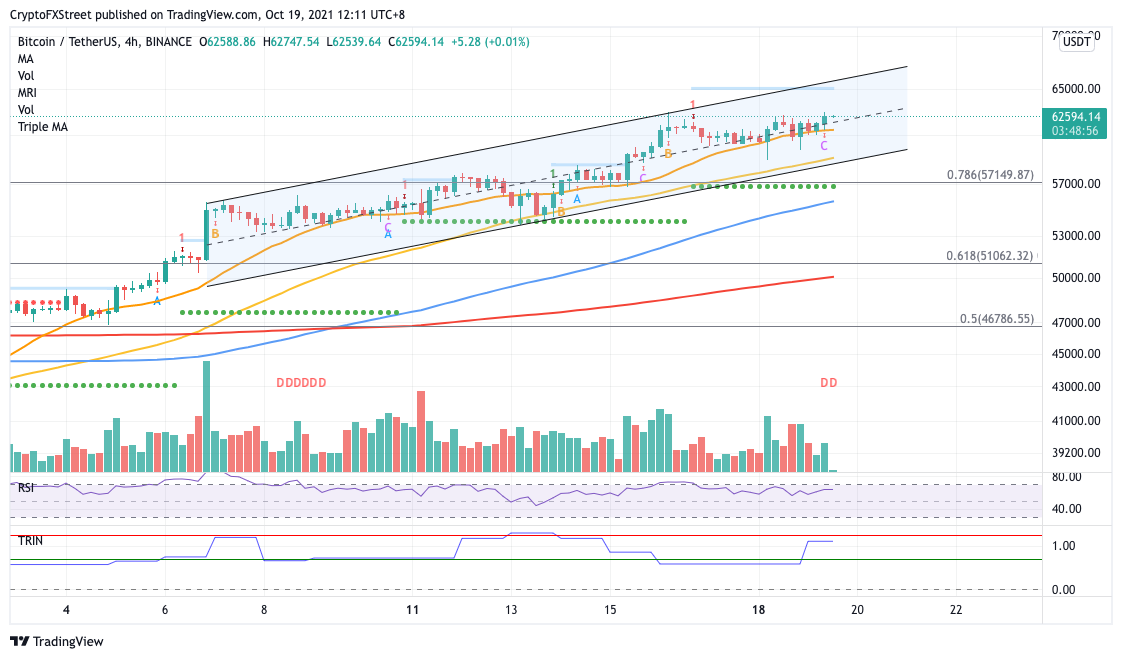 If Bitcoin price loses strength temporarily and retraces, the first line of defense for BTC is at the middle boundary of the parallel channel at $62,227, then at the 20 four-hour Simple Moving Average (SMA) at $61,497. Further support may emerge at the lower boundary of the chart pattern at $58,820, which sits near the 50 four-hour SMA.

An additional foothold will appear at the 78.6% Fibonacci retracement level at $57,149, which coincides with the support line given by the Momentum Reversal Indicator (MRI).