Outlook: Today we get consumer confidence for Nov, Sept house prices and the Dallas Fed services index for Nov. We may also hear whether the White House can fend off a railroad workers strike, something not getting much press but obviously a big political setback for a pro-union president. Congress may get involved.

As noted above, European countries are reporting inflation ahead of the eurozone composite tomorrow. By some measures, including the harmonized version, inflation is down and by other measures, it’s up. In the US, we also have multiple versions and analysts basing policy forecasts on their choices. The ruling sentiment now seems to be that inflation has peaked and it’s only a matter of time before the Fed stops hiking and may, indeed, start cutting within the year.

We don’t get the CPI from the Bureau of Labore Statistics until Dec 13, followed the next day by the Fed rate decision. The Fed supposedly doesn’t care about CPI, anyway, preferring the PCE version, although it can hardly ignore CPI altogether as markets respond to it.

You can make just about forecast you like depending on which measure you use. Take your pick:

In October, CPI was 7.7% annualized (from 8.2% in Sept) for the 4th lower number in a row and the lowest since January. Over half of the inflation was due to shelter.

The personal consumption expenditure price index was 6.2% y/y in Sept, the same as in Aug, while core PCE was 5.1%, up from 4.9% the month before. The Fed is usually cited as attending to core PCE, although the Fed website says primary PCE, but never mind. 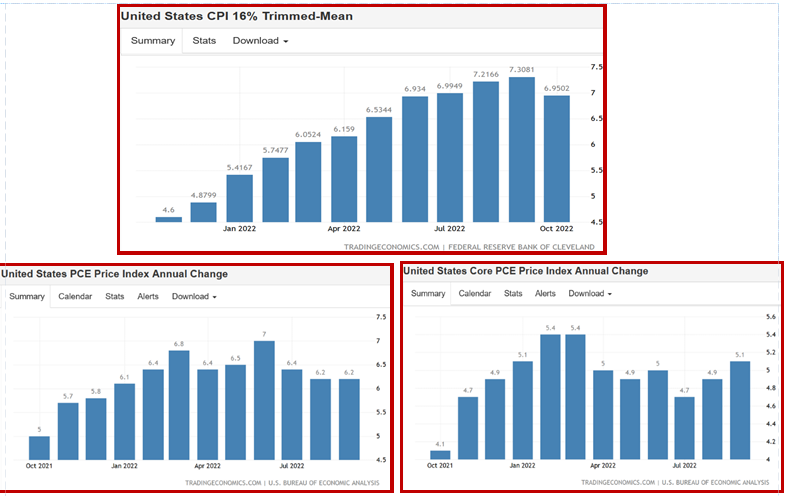 So, we have a range of numbers from 5.1% to 6.2% to 6.95% to 7.7%. One idea is that if core PCE is lower, the market will revert to the dovish/maybe pause stance, and if it’s higher by more than one point, the market will freak out and price in more hikes, bigger hikes, hikes for longer. A “weak” core PCE price index is dollar-negative while a stronger one is dollar-positive, which is foolish and unreasonable considering the US is going to end up with the highest rate in the G20 in the end.

The market has three problems: as El-Erian wrote yesterday, buying into a single narrative and then being shocked, shocked! when it’s wrong. Secondly, imagining a single data point can or should drive currencies for more than a day or two. This is useful for traders on a super-short timeframe, but it’s still bad analysis.

And finally, the ancient fallacy of post hoc, ergo propter hoc. That means “after this, because of this,” when correlation is not causation until proved. The rooster crowing does not cause the sun to rise. The core PCE dipping does not cause the Fed to cut the next hike to 50 bp when the Fed has already said multiple times it’s thinking about 50 bp for a pile of reasons, none of which is the PCE this time. The PCE trend, maybe, but see the charts. We don’t actually have a downward trend in any of them. And that raises the question of how many falling inflation numbers does the Fed have to see to be satisfied inflation was whipped? Nobody knows, and the headline inflation number, whether CPI or PCE, is hardly the sole determinant. It’s not one number.

The CME FedWatch tool shows yesterday’s Fed comments failed to shift the expectations to a higher ending point. Those seeing 5-5.25% by the June 14 meeting are 38.6% now, but it was 40.2% yesterday and 42% a week ago. How to explain this refusal to accept Fed pronouncements that could not be clearer? The ruling idea is that the US will be getting a hard recession next year–witness the deepening yield curve inversions–and the Fed will chicken out, er, change its mind. This is certainly one option, but not the only one.

Betting on recession seems to be the ruling offset to risk aversion arising from China and even Musk, and accounts for the dollar failing to hold yesterday’s gains. The US stock market recovery contributes, too. It remains to be seen whether blaming Chinese local officials will work but it also seems unrealistic to imagine the zero-Covid crisis is over. It’s conceivable the Australian dollar will continue to be the canary in the coal mine. In the meanwhile, the emerging market economies (Mexico) are doing well. Gather ye rosebuds.