Another nervous start to the year as investors had initially looked to weather storms but clouds returned as the week wore on. The Fed turned increasingly hawkish and tech investors turned increasingly nervous but we do not see a direct causation between the two. Unlike many of our friends in the mainstream media. Why? Firstly despite the Fed’s hawkish tone on Thursday yields actually dropped, this should usually have been accommodative for risk equities and the Nasdaq in particular. No instead we turn our attention to the big beasts of the financial markets and land at the top of the pile with the dollar. Many were left perplexed by the move in the dollar as the week wore on. Positioning had been established with the themes of hawkish Fed, doveish ECB, and an outperforming US asset base, all dollar supportive. But looking at the equity performance so far this year and we note Europe has outperformed the US as has the UK. While ECB chief Christine Lagarde is sticking to the inflation is transitory playbook borrowed from Powell, dollar traders are beginning to question this dovishness and are pricing a narrowing of the interest rate spread. German 10-year yields have seen the biggest jump this week among developed markets.

All this has meant a repricing of risk and risk assets and it is that which led to Thursday's fall. Investors had started the year nervous over risker tech assets. This was slightly abated with a positive start to the week but the risk aversion returned. What remains to be seen is whether it spreads. Bank stocks, so far the favoured sector of the year, are suffering on Friday after some mixed earnings from JPMorgan (JPM), Citigroup (C) and Wells Fargo (WFC). Goldman (GS) could steady the ship on Monday but the sector is already well priced for these earnings.

Not surprisingly the financial sector saw decent inflows last week as retail piles into financial at just the wrong time. We say retail as ETF’s attract a huge amount of retail flows in general. Getting in late just as bank earnings show that it is a long road ahead may hurt a little in the short term but the sector should perform well for the year so all may not be lost. XLF SPDR Financial Sector ETF took in $1.4 billion last week. At least retail traders look to be buying the dip in the Nasdaq space as we surprisingly report that Pro Shares Ultra QQQ ETF (TQQQ) was one of the biggest inflows with $2,2 billion coming in. This is a leveraged Nasdaq play which aims to give three times the performance of the Nasdaq ETF (QQQ). So not only buying the dip but leveraging up to do so. That always works out well right!

Despite the increasing doom and gloom, we remain in a strong uptrend on short, medium and long term time horizons. The most recent series of higher highs and lows remains in place from the October 2020 low but we did identify a bearish divergence in the RSI on the achievement of all-time highs in late December. This bearish divergence is still playing out with the MACD is bearish territory and a declining RSI. Note the triangle formation in the RSI. So prepare for a breakout. 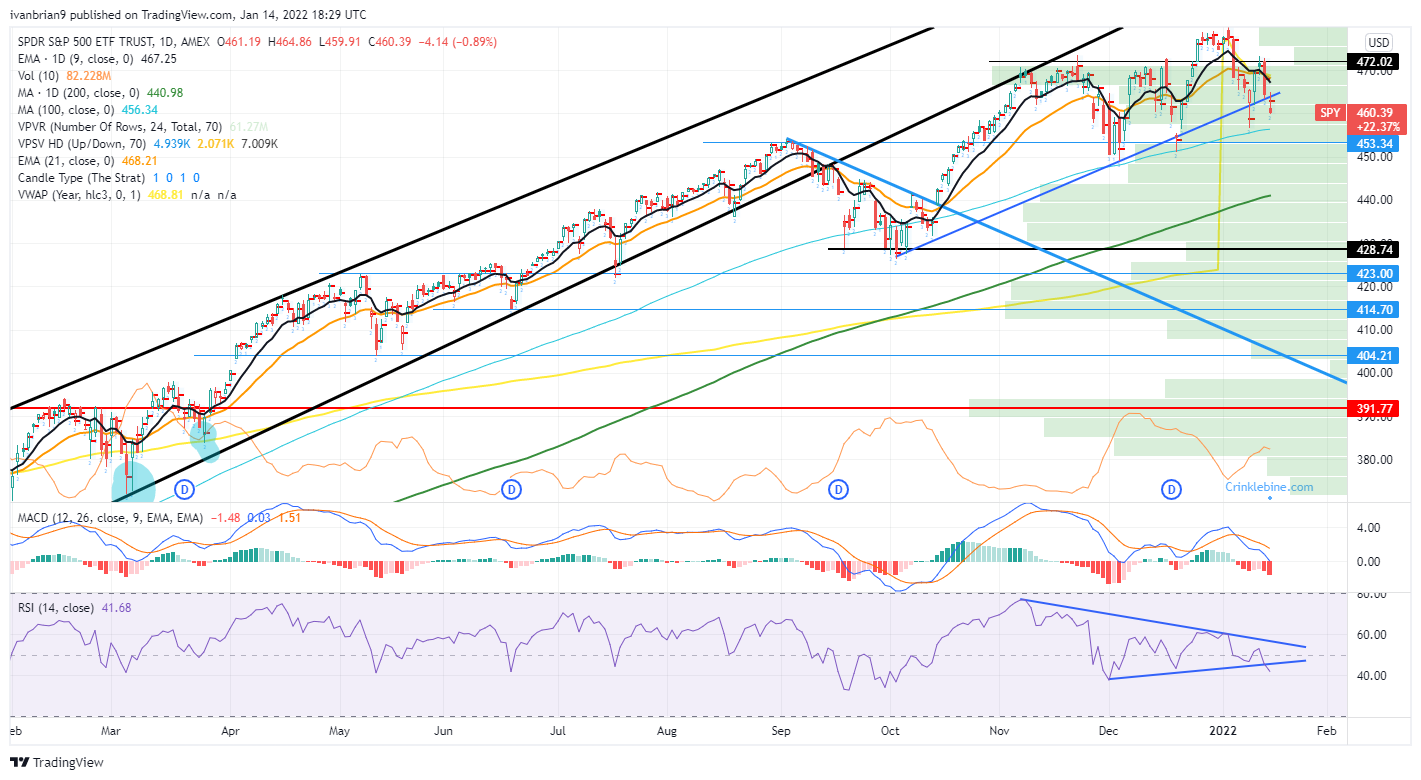 The double top is fairly well established now and is a well-known bearish reversal pattern. This coupled with the bearish divergence we saw in the RSI on Dec 28 really should have sent us running for the hills. The target of the double top is $350 which takes us neatly back to support and the low from October 5th. Breaking the massive support trend line will be the key catalyst. 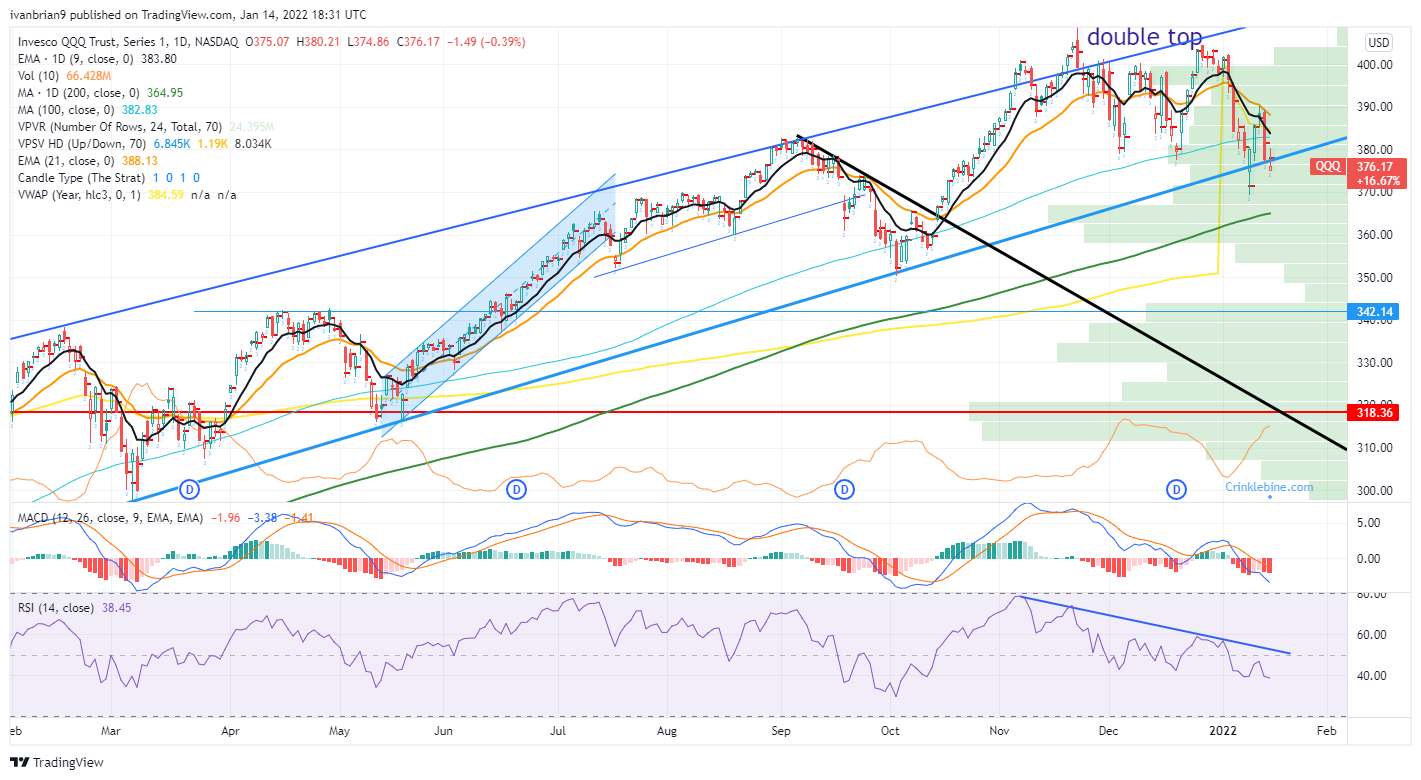 Massive slate again next week with Goldman leading the way on Monday. Bank stocks did not respond to earnings beats on Friday with Citi and JPM tanking so can Goldman buck the trend? We forecast a strong beat on top and bottom lines but are less sure of the short-term effect on the stock. Given today's pullback, we are likely to see a decent pop in premarket anyway but follow-through may be difficult. The strong background with IPO activity, M&A and stock buybacks all at record highs should help. Goldman topped the list in 2021 for M&A deals as well as IPO listings so the last quarter will reflect that performance. Netflix (NFLX) kicks off tech earnings season and it reports after the close on Thursday.

Nothing too dramatic next week in terms of economic data. We get a few regional Fed surveys but that’s about it. Nest week is earnings that will be enough to keep things interesting.