The stock market was down marginally on Tuesday. GE is getting blamed for a lot of the selloff, but, since the Dow is price weighted and GE stock is in the teens, it has very little effect on the index. With such a big fall, some are wondering if GE will be kicked out of the Dow next year. I think it will be kicked out if it falls below $10 per share. If the Dow wants to add an industrial firm to keep to its name, it will add Honeywell to replace GE. If it’s just looking for another large company, it will add Alphabet. It’s shocking that arguably the most important company in the world isn’t in the index.

Even with the modest negativity on Wall Street, it’s important to realize how great this year has been. There hasn’t been a 3% selloff in 258 trading days which is 17 days longer than the previous record long streak. As of the end of last week, this streak has given the S&P 500 23.8% gains which is second to the 30.4% gains seen in the previous record long streak in the mid 1990s. I would consider this the best streak in market history if the returns get passed 30.4%. Along with this up market without any selloffs has come extreme positivity as the investor sentiment index is the highest since 1987.

The chart below is another example of the heightened optimism, this time among fund managers. Usually, the fund manager survey is something you want to follow, but in this case, it’s something you want to fade. A record 16% of fund managers said they are taking on above normal risk. As you can see, investors took on more risk in late 2005 which was before the financial crisis. Investors took the least risk in the depths of the recession which is when they should have been buying. They also weren’t taking risk right before this latest rally in 2016. That being said, other times when risk taking was high, a crash didn’t occur soon after, like in 2012. The basic premise this tells you is something you probably already know. We aren’t on the cusp of a major rally, but it’s not certain a crash will occur in the next couple of years. The other record in this survey gets back to the point I made about the BAML survey being something you should listen to. A record 48% of investors said stocks were overvalued. Some investors are holding their nose and buying expensive stocks to avoid losing out on the momentum. If you short this market, you get run over. 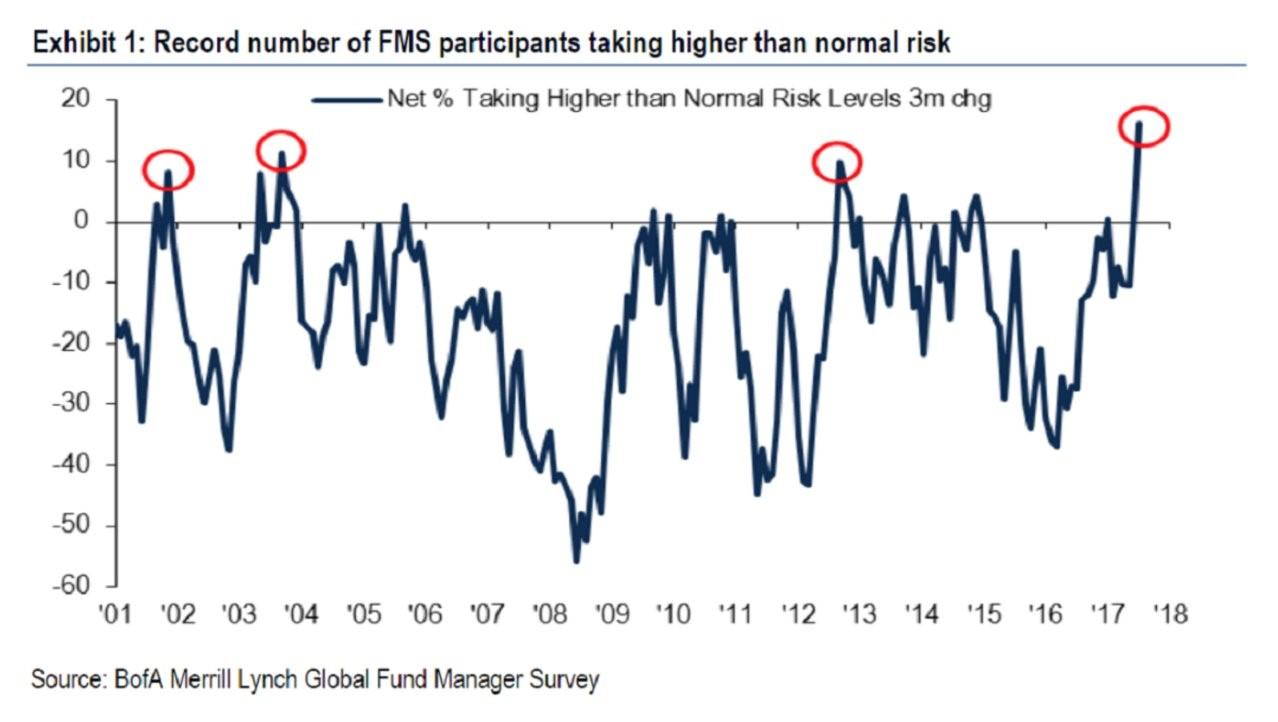 Interest Rates Have Been Falling For Centuries

The point I made above was a short term one showing the excessive positivity. That could easily reverse in one month if stocks fall.  The chart below, on the other hand, shows an extremely long term trend. As you can see, real interest rates have been in a 500 year trend lower. The last time the century average real interest rate went up was from the 1300s to the 1400s. This makes the recent multi decade long decline in inflation and interest rates look puny. While rates have gone up and down in the short term, there needs to be a seismic shift in economics and demographics to move it higher. Central banks aren’t exclusively to blame for this trend as the Fed was started in 1913. This trend has been going on since before America was founded. 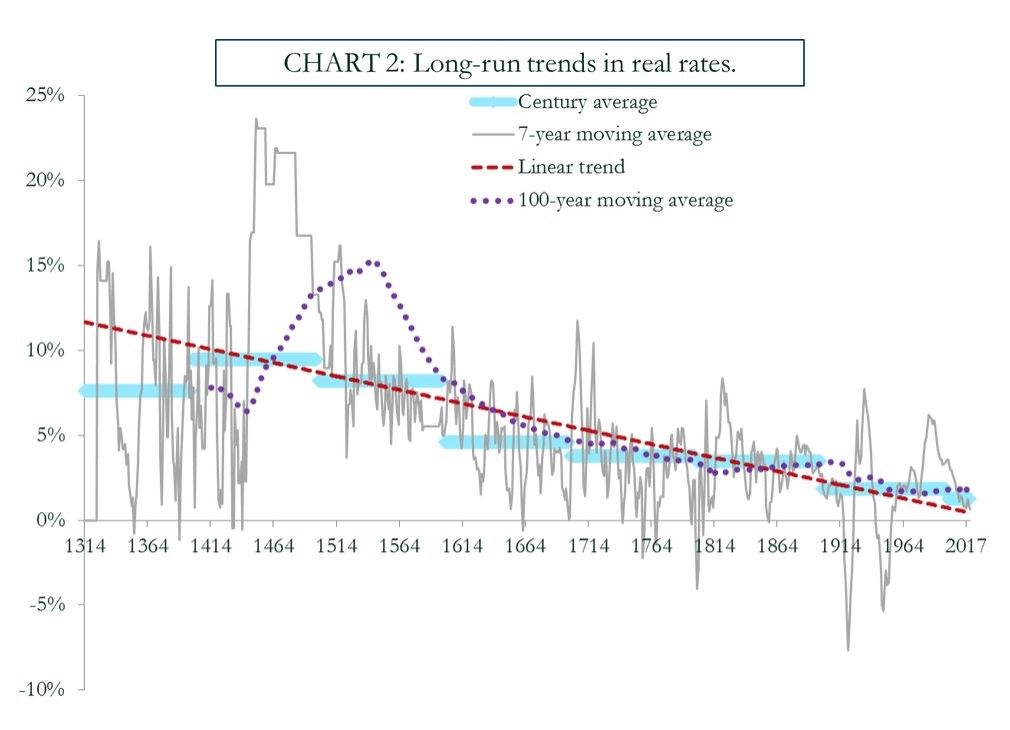 One of the reasons real rates fell in the 2000s from the 1900s is because nominal rates declined. Nominal rates were actually higher in the 1900s than in the 1800s, but real rates were lower because inflation increased. We’re not going to figure out what will change the 500 year secular decline in rates, but we can try to understand what can change the recent stagnation in the past 33 years which we mentioned earlier. We are in the second longest real rate depression in the past 600 years. The longest was from 1471-1516 which is the time when Columbus discovered America. However, the largest depression was 1700 basis points. This current trend is the shallowest as there has been about a 550 basis point decline. The fact that rates fell near the zero bound might be partially responsible for this shallow decline.

The takeaway from this long term analysis is that when the trend ends, rates skyrocket quickly. The average return after these depressive periods are over is 315 basis points in the first 24 months. It’s important to not get confused between nominal rates and real rates. Regardless where inflation goes in the next few years, real rates will shoot higher if we are near the end of the cycle. It’s critical to pay close attention to the changes in real rates over the next few months as the Fed is pushing up short term rates by raising the Fed funds rate.

The auto loan delinquencies have shown modest increases in the banks and credit unions which we discussed in previous articles. However, that doesn’t tell the whole story. The auto finance delinquencies have increased to near the peak seen as a result of the financial crisis. As you can see from the chart below, the auto finance delinquency rate debt always has a higher default rate because the firms are willing to gives loans to less qualified buyers in order to make a sale. 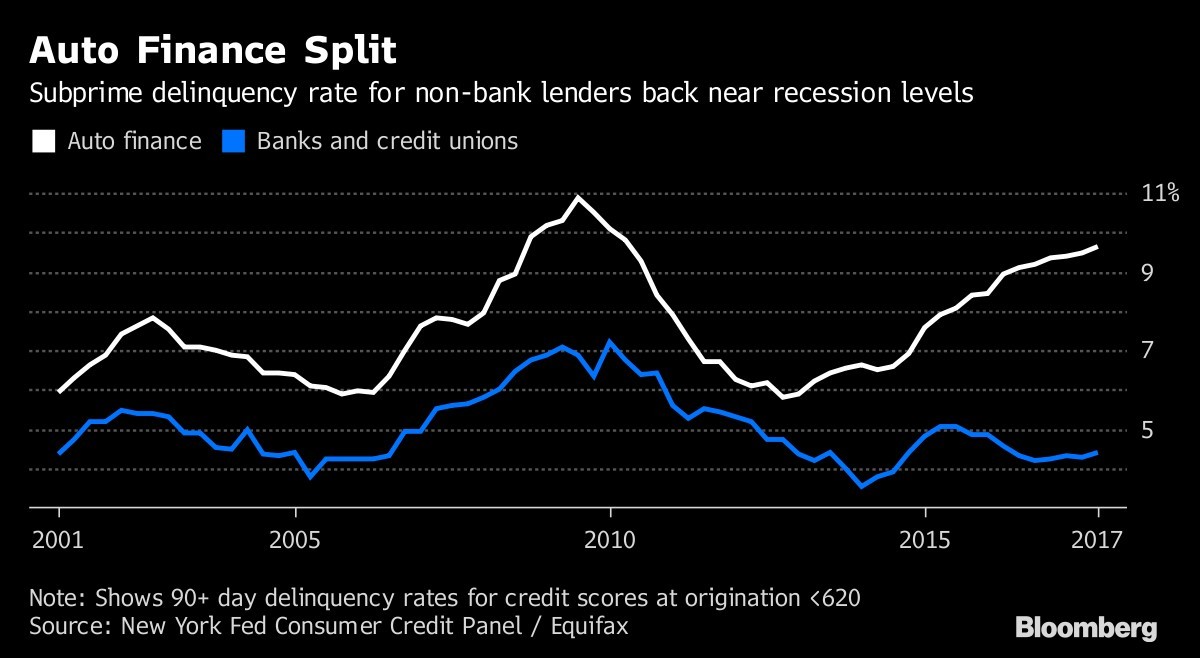 Speaking of giving loans to buyers who aren’t qualified, the chart below breaks down the auto loans by credit score and by who is giving out the loan. As you can see, the auto finance industry gives out a higher percentage of loans to those with a credit score of below 660 than the banks. Both the banks and the auto finance firms have seen a cyclical increase in loans give out to borrowers with low credit ratings, yet only the auto finance firms are seeing higher default rates. This implies there were other issues with the lending standards. This information means that auto manufactures are in trouble as they are going to take losses from the defaults; the lending standards on subprime loans will need to go up which will hurt car sales. The hurricane related sales were a blip on the radar. The weakness in auto sales will drag down GDP growth starting in either Q4 or Q1 2018. Obviously, delinquencies are also bad for those consumers who are experiencing them. This will drag down consumer spending. 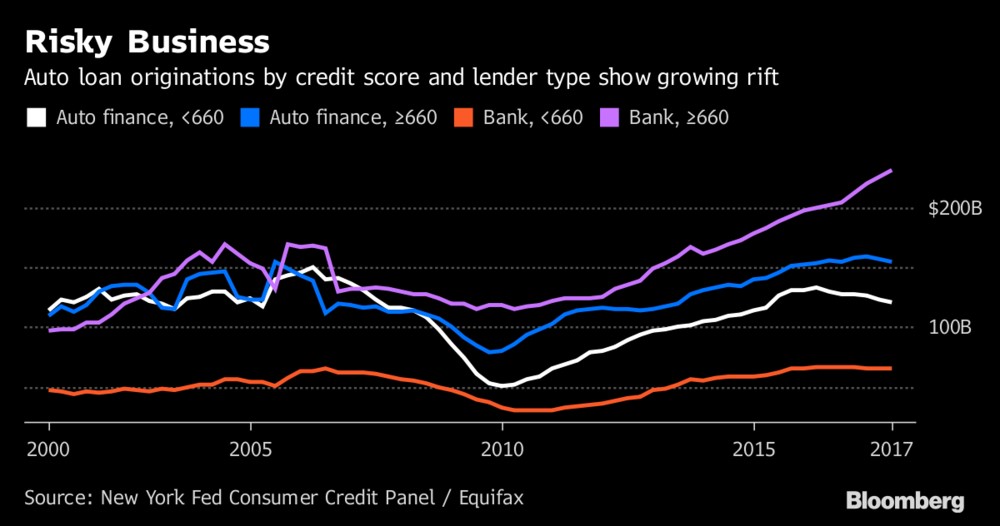