The unexpected optimism of manufacturing executives could carry over into the much larger services sector as the US exits the pandemic era, and the economy revs into recovery despite the dour outlook from analysts.

Purchasing Manager's Indexes (PMI) from the Institute for Supply Management (ISM) are forecast to tread water or fall in February in the Reuters Survey of economists, with only the Prices Paid Index an exception. The overall PMI is predicted to be unchanged at 58.7. New Orders are expected to drop to 55.4 from 61.8 and the employment Index is projected to drop to 51.7 from 55.1. The Prices Paid Index is expected to rise to 64.7 from 64.2. 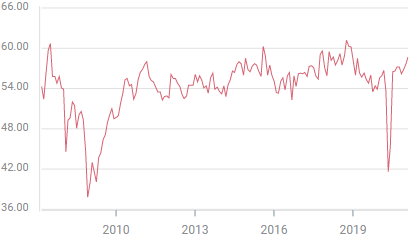 Forecasts from analysts and economists for the ISM Manufacturing Surveys were far less positive than the data from the business line managers polled by ISM. 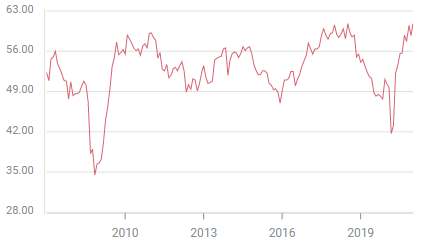 Manufacturing industries in the United States, because of the longer lead time in all aspects of factory production, are considered a leading indicator for the 85% of the economy engaged in the service sector.

Consumers have given business planners good reasons to be optimistic about the next six months to a year.

Retail Sales soared 5.3% in January almost five times the 1.1% forecast. The Retail Sales Control Group, the proximate equivalent of the consumption component of GDP, rose 6%, seven-and-a -half times the 0.8% prediction.

This surge of buying has been credited to the $600 checks received by many families from the December federal stimulus package. With another $1400 on the way soon and the pandemic winding down, consumer spending should remain strong as extra cash combines with the psychological relief at the end of the pandemic.

Businesses have anticipated the economic revival for several months. For the half-year ending in January business investment spending as tracked by the Durable Goods category Nondefense Capital Goods ex Aircraft has averaged a 1.43%, the best run in over seven years.

The New Orders Indexes for the service and manufacturing sectors have had some of the highest sustained reading in two decades over the last six months.

Equity prices over the last six months, Treasury yields over the past two, and the dollar over the last two days have all responded to the signs of an incipient and powerful recovery in the US economy.

If the US consumer exhibits the verve of January for a few more months, even that may understate the possibility.