We get services PMI today and revised composite, likely a boost. We also get the usual jobless claims, 307,000 in November, compared to 404,000 in October and a market consensus of 410,000. TradingEconomics reports "It is the smallest increase in four months as a rise in COVID-19 infections and further lockdowns slowed down the hiring." The ADP number implies tomorrow's non-farm payrolls number is going to be pretty low. Analysts are already revising their forecasts downward. 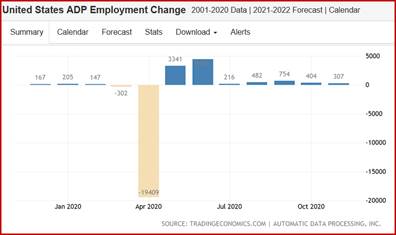 Jobs are important, but the fate of the second stimulus is more important. If we don't get it, the list of dire consequences is long. Again, not a bleeding heart focus, but rather the ripple effect on consumer spending, foreclosures, etc. Here is the NYT's list:

"Moody's Analytics forecasts that without more aid, the economy will fall into a new recession early next year, with the unemployment rate approaching 10 percent. And Jerome Powell, the Federal Reserve chairman, has said that the history of economic crises suggests Congress usually passes too little stimulus, not too much. ‘Some fiscal support now would really help,' Powell told a Senate committee this week."

If Goldman says we will get a bill, even a reduced one, we are inclined to believe it. We also believe that the European Council will get to a workaround on the €750 billion budget that includes pandemic relief, with or without Poland and Hungary. Both regions getting relief doesn't level the playing field—only beating back the pandemic can do that. So far, Europe is doing far better than the US, and Asia is beating the rest of the world.

See the chart from the WSJ. This particular comparison is not really fair, because PMI's are hardly the only measure of economic success, but the fact remains that Asia has done spectacularly well in containing Covid 19, while the West has done markedly worse. At some point somebody will make a chart showing Covid cases vs. human/civil rights, but harsh measures are working in China, S. Korea and Japan, not to mention Thailand, Taiwan, Australia and New Zealand. Chaotic India is the Asian exception, of course. 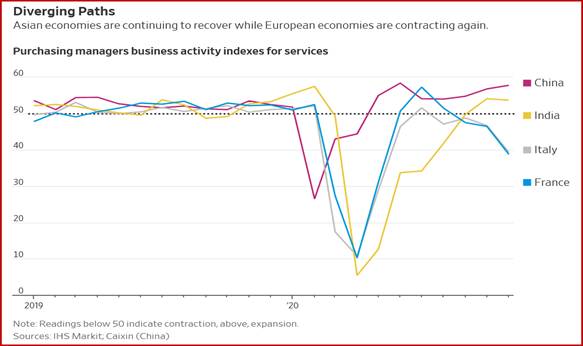 Nobody has mentioned it yet, but there is another implication—the West has to run up deficits while the Asian countries do not, or if they do, can spend the money on more productive applications than feeding workers. As a general proposition, capital investment precedes economic growth. It's why we watch capital spending plans in the Tankan, for example—the correlation is pretty good. If a country wants to beef up capital spending, it can subsidize research and development with tax breaks or outright subsidies. Europe and the US are losing this luxury because of inadequate pandemic control.

Finally, we still have not come to grips with the weird divergence between a realistic economic outlook—double dip recession—and the booming stock market, not to mention oil at $45. This may be behind the unexplained (if minor) recovery in gold. Leaving bitcoin and inflation fantasies to one side, gold performs the function of appealing to the generally fearful.

Well, we should be fearful, and more fearful in the US than elsewhere because the American management of the pandemic is so inadequate. Trying to tamp down our inner gold bug, we still see gold's future as a function of the success or failure of the vaccines. If the vaccines are rolled out in Q1 and at least 70% of each population gets vaccinated by the end of Q2, the recession can be short. We expect Europe to get there. We are not so sure about the US, not with a large number of deniers and a high proportion of anti-vaxxers.

Here's one scenario: regardless of stimulus under a new president, the persistence of the Covid outbreak in the US holds back the US economy to this time next year and maybe longer. Meanwhile, Asia keeps trucking along and Europe starts recovering by March. The US will be the "sick man." Investment and speculative capital will flow out of the US and inflows like foreign direct investment as well as to public markets will fall. They won't stop, but the US can very well lose its top dog status. Not to be unduly pessimistic, but this would provide an excellent marketing opportunity to the likes of Trump, converting his own bad pandemic response into a grievance against others (and calling for capital controls).

Whether we get a pullback in equities may well depend on where the US comes out in the Covid management sweepstakes over the next three months. It's awfully hard not to imagine a retrenchment, and a corresponding rise in gold.

Politics: It seems likely Trump intends to announce his candidacy for president in 2024 and will hold a giant rally on inauguration day to do it, which offends the institutionalists who prefer to celebrate tradition. After all, he can make a lot more money from political donations than from hotels and golf courses. Separately, daughter Ivanka testified about overpaying Trump hotels from inaugural funds in a case brought by the Washington district attorney. Golly, is the hammer coming down?