The market-mover today may well be jobless claims, forecast down another 10,000 to 350,000. See the chart from the WSJ. Note the BLS imposes seasonal adjustments, of doubtful utility under the circs. There is a mismatch between new jobs created—850,000 in June—and the drop in both initial and continuing claims (forecast down about 140,000). Bloomberg denigrates the data as only a “slight” drop.

It remains to be seen whether ending special benefits and thus the disincentive to take a job is going to bring forth a flood of workers willing to take low salaries. We imagine it’s too early to see that effect and we won’t get it until another 4-8 weeks. 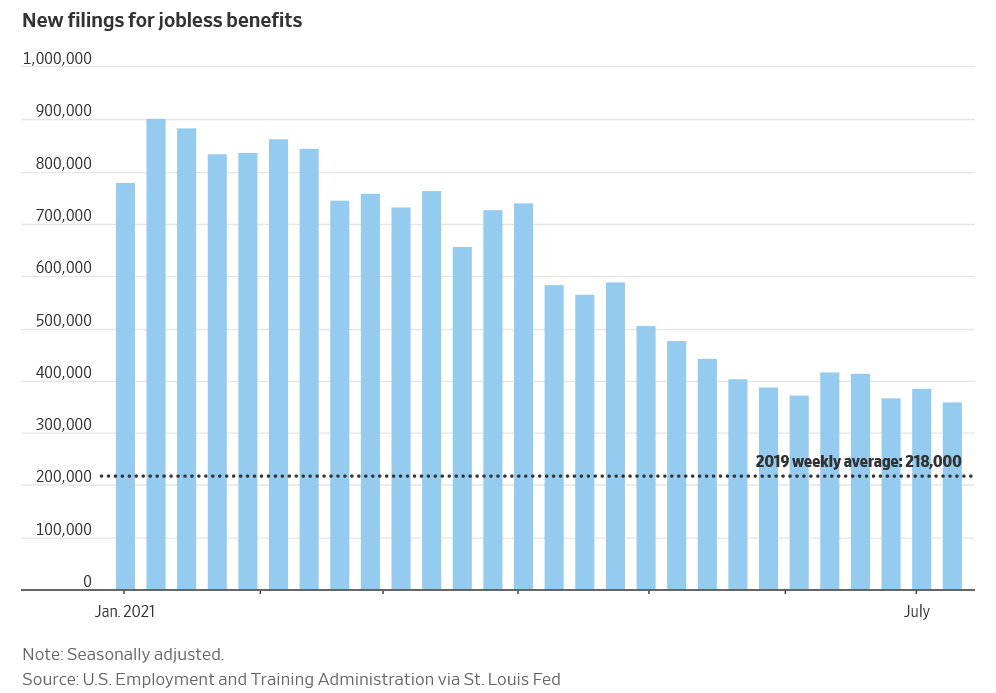 The ECB decision must not be very interesting because a half-hour after its release at 8 am ET, there is only one headline and report—the FT, which says “ECB vows to persist with negative rates in bid to fuel inflation.” The “new strategy” leaves rates and buying plans on hold with the only change a willingness to see inflation surpass 2%, the previous cap, to get a higher average.

This is exactly what had been predicted and is not a little silly, since inflation has been under 2% for over decade and there is little evidence it will rise over 2% in the first place. Granted, the latest number is 1.9%, but the ECB expects a bump in inflation in H2 to be followed by 1.5% in 2022. So this means the ECB is on hold basically for years to come.

The FT somewhat snidely ends the article with this: “ In a survey of about 250 German financiers and economists earlier this month, the Center For Financial Studies in Frankfurt found that eight out of 10 believed it would be ‘increasingly difficult to depart from the ECB’s low-interest-rate policy as governments become increasingly dependent on purchases of their bonds.’”

As for US inflation, some analysts are hanging on to the 5-year breakeven, down a bit at 2.45%. It is absolutely clear that the big players and their economists have bought the Fed’s transitory story hook, line, and sinker. This is good news in the sense that the recovery/reflation trade can continue and those yapping about a stock market crash are just plain wrong.

Despite the Delta risk in the US, nobody is expecting another lockdown except in some specific localities. Growth can continue to decelerate a bit but remain at world-beating levels, with the critical employment data yet to come, if not perhaps until October. Even then we can’t expect a hawkish Fed because of the transitory story. The implication is that the dollar will follow the recovery/reflation theme, once we get over this correction.  The correction is, however, a doozy. Only those making extremely short-term decisions—one hour--will escape it unscathed.

Technical Note: A corrective move is always a misery for a trend-following system. Your choices are to fade the trend and hope to get out in time, or estimate where the trend will resume, sometimes called “trying to catch a falling knife.” We take both paths at various times (based on momentum) and both work about half the time.

Fundamentals are hardly ever useful. The USD/CAD is a perfect example. It had been vastly overbought in defiance of most fundamentals, including a good vaccination rate and a more hawkish central bank in Canada, not to mention rallying oil. The correction is one of the strongest.

Yesterday the dollar fell almost 1% against the CAD, one of the bigger one-day drops. See the chart (480 minutes or 8 hours, which is what fits best on the page). The previous low is 1.2423 and the channel bottom (and prospective Bollinger band) is 1.2459, but the 50% retracement is 1.2404, so those presumed supports can get broken. We might say the CAD is responding to an overall return of risk appetite after the Delta Panic, a known event for commodity currencies, but the AUD is not matching the performance and it’s a commodity currency, too. 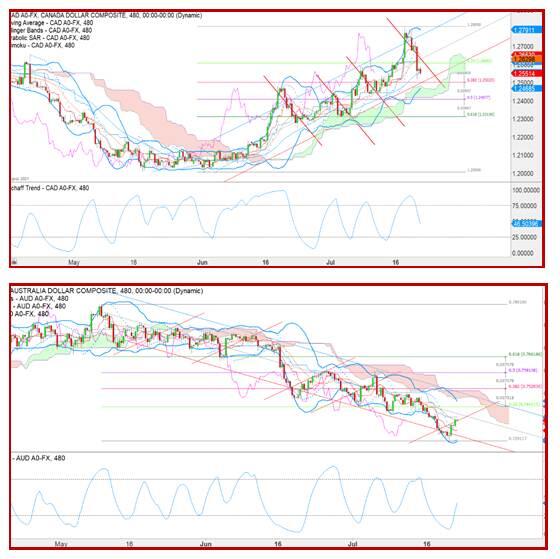