As we wrote yesterday, market turmoil can trump boring old economics any time. The additional drop in the yuan today and the accompanying stock market drop and trading halt are becoming a crisis. The fast-and-easy interpretation is that the Chinese economy is slowing so much that assets are overpriced. The deeper interpretation is that the markets are not mature enough to withstand negatives and panic—“mature” meaning a large number of participants with a wide variety of mindsets and goals. In the US, for example, many funds must stay invested in various named sectors regardless of price changes by some minimum amount, or are forbidden to go short, or not allowed to invest more than a small amount in foreign assets (like insurance companies). These are mostly internal rules, not state-imposed, and while selling panics still appear from time to time, forced participation mitigates the overall damage.

Moreover, the government feels obliged to intervene in both markets, and it’s costly. We don’t have current data yet, but for December, Bloomberg reports Chinese reserves down a record $108 billion from FX market intervention. See the chart. “That was about four times greater than analysts predicted in a Bloomberg survey, and reduced the stockpile to the lowest level in three years. Despite the intervention, the yuan’s descent has steepened, with the currency falling to a five-year low on Thursday.”

The longer-term implication is capital outflow. Failure to deliver a coherent message (“transparency”) tends to produce exactly the effect the government is trying to avoid. After the August devaluation, Bloomberg estimates capital outflow at $508 billion to end-November. Since becoming a reserve currency on Nov 30, the PBOC has weakened the daily fix by 2.57%. Well, the Aug 11 deval was 1.9% on the first day, so the current market-driven move is already bigger than the official move. The message is that the August devaluation was not big enough and that the rolling daily fix failed to reflect true market supply and demand. In other words, the effort to mimic a free market was an utter failure.

This is a classic case of the command economy mentality not able to cope appropriately with real economic players and factors. In a way, it’s parallel to Russia opening up to private enterprise in the 1990’s and being surprised that venal and corrupt oligarchs were the result. In China, everyone now agrees the circuit breakers are too small. China has a 15-minute halt after a 5% drop and a full-day halt after a 7% drop. The 2% gap is catnip for sellers who race to get in their sell orders, causing the very thing they fear. In contrast, the S&P 500 circuit breaker is a 15-minute half at a 7% drop, another 15 minute-halt at 13%, and a full-day halt at 20%. After 3:25 pm, it takes a 20% drop to halt for the rest of the day. Reuters reports “India has threshold falls of 10 and 15 percent for trading halts and 20 percent for shutdown,with longer trading halts imposed as the day progresses.” And Singapore has a fancier version “where the 10 percent upwards or downwards band is based on the last traded price at least 5 minutes ago, instead of the previous closing price or the start of the trading day. It could be more effective in terms of injecting some calm into the market because traders know they can get out, even if they can only trade within that percentage. It doesn't induce the fear that you can’t get out." 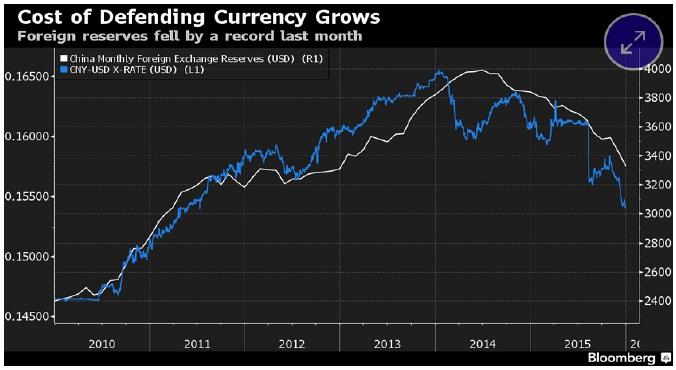 Can the solution to the current panic and volatility be as simple as raising the thresholds? Well, it beats embarrassing admissions of having a dysfunctional system in the first place—dual currencies, topdown control of who can sell and how much. The Chinese government should raise the thresholds and PDQ. It should also start making totally clear statements instead of leaving everyone guessing.

It’s all too easy to blame China for the oil price collapse, with the underlying reason being a drop in Chinese demand. But the oil price move was probably going to happen in the first quarter anyway, if not the first week, because producers everywhere simply refuse to cut production (and revenue) due to oversupply, worsening the oversupply. The history of the oil market has plenty on incidents of exactly this nature; modernity doesn’t give a market a break. In the US, stockpiles did fall (5.1 million barrels in the Jan 1 week), according to the EIA, when a build was forecast—nut never mind. Output rose by 17k barrels a day last week, to 9.22 million bpd. And Iranian production overhangs everything. China should be spending its money reserves on oil reserves instead of currency and equity market intervention. Can we define “prudent” again?

Central banks everywhere pretend that falling oil prices are temporary and aberrant, and not a core factor in forecasting inflation. We really need to get rid of this fiction. Oil prices penetrate everywhere. For decades (if not centuries) the chief focus was wages. Germany, for one, was meticulous about negotiating/strong-arming unions. But in an overpopulated world with decent labor mobility, wages are not the main thing anymore. Oil prices are. Those expected the Fed to stick to four hikes this year because inflation must be lurking in the bushes (including Stanley Fischer) are due for a disappointment. Yesterday’s Fed minutes explained nothing and yet some were surprised by the frank admission that low inflation and the dim prospect of any real rise in inflation may well stay the Fed’s hand. Golly, this was obvious a year ago.

Central bank economists need to up their game. They didn’t see the oil price rout and are still laboring under the mistaken impression that they can ignore it when forecasting inflation. Granted, we shouldn’t attribute more brainpower to economists at central banks than any other economists, but it’s clear theirmodels could use a tweak. Mr. Draghi, for one, has said the ECB’s QE will work for sure. The clear meaning is that inflation will be rising in Europe and no additional QE will be needed. But inflation is not going to be rising anywhere and the reason will be falling oil prices. To say it’s “temporary” doesn’t contribute anything. The world is too slow in coming to the deduction that additional hikes by the Fed will probably get pushed far out, that the ECB may have to enlarge and extent QE after all, and Japan will be in the soup for yet another decade.

If and when this viewpoint becomes more widespread, it’s hard to say what currencies benefit and which fall out of favor. A key reason to love the euro is the commitment to controlling inflation, a far bigger commitment than in the US or UK. If inflation gets taken off the table, does that love endure? And if the Fed ever has to admit that the bond market is right, not four hikes this year, does the dollar not fall? That’s what we got late yesterday and it’s all too likely to persist. Sterling cannot hold up in the face of the BoE first-hike date being pushed out every time we turn around. And the yen is perverse, rising on safe-haven concerns when the economic fundamentals indicate it should be weaker.

In the end, we will blame China for roiling markets and setting fire to volatility, but it’s unfounded expectations about our own economies that is truly at fault. We still think the euro “should” continue to decline, but at the same time, we need to watch the evolving mind-set.