The pound is not usually synonymous with risk-sensitive currencies. That label is commonly used to describe commodity-driven currencies such as the Australian and Canadian dollars that move in tandem with global risk sentiment. But with the United Kingdom now formally having left the European Union, Brits could not have picked a worse time to ‘go it alone’. It’s no wonder therefore that at a time of heightened risk aversion, traders have been dumping the pound for safer investments, pushing it to 35-year lows.

Brexit is a distant memory

It wasn’t that long ago when Brexit headlines were dictating sterling’s every move. But that seems like a distant memory now as the economic fallout from the coronavirus pandemic and policymakers’ response to it is the only thing preoccupying markets at the moment. The pound had actually levelled up and stabilized prior to the virus outbreak in the wake of Boris Johnson’s resounding election victory that had brought some much-needed clarity to Britain’s Brexit path.

But even after the election rally, sterling was trading at historically low levels. Thus, it was inevitable that the onset of a new emergency would send the currency plummeting to depths not seen since 1985. The pound is not alone among major currencies in going off the rails against the US dollar during the virus crisis. The Australian, Canadian and New Zealand dollars slid by between 10-18% from the start of the year to their low point, and the pound’s losses fall within that range. 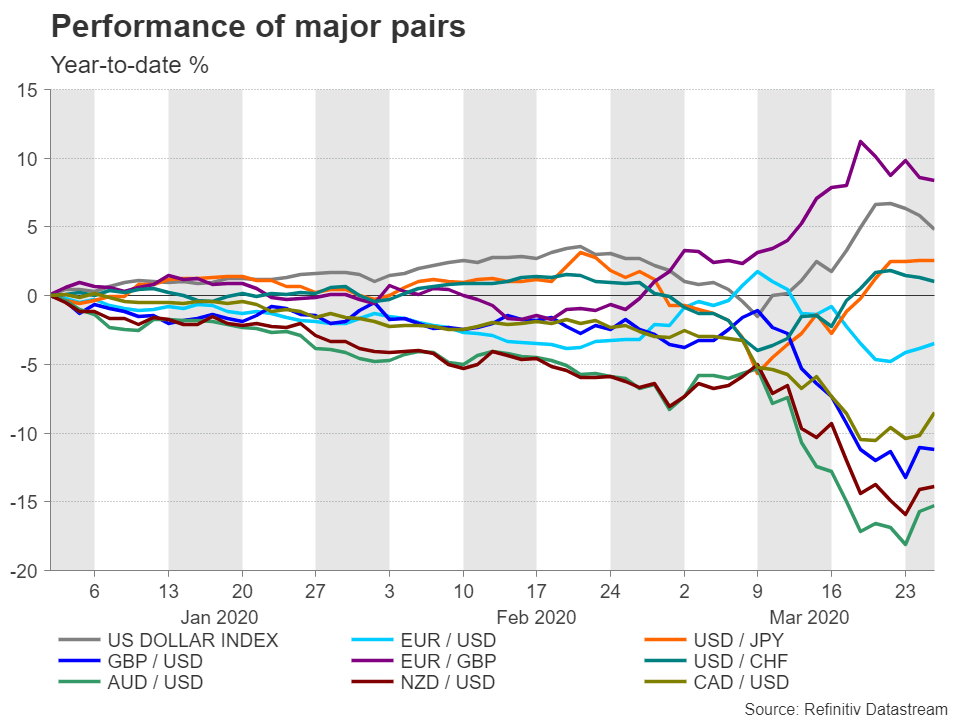 Risk premium for pound has jumped

However, there is nothing mystifying about the slump in the commodity dollars – as dramatic as it is. Commodity prices, which had just won some breathing space from the truce in the US-China trade war, have nosedived as the virus spread has forced business and factory shutdowns in every corner of the world, leading to a collapse in demand.

But the UK is not a major exporter of commodities and its economy is more closely aligned with that of the Eurozone than those of Australia, Canada or New Zealand. In comparison, the euro declined by a more modest 4.6% at the height of the dollar’s surge.

Looking at how speculators’ positions in the British currency have changed over the past week, long positions have dropped, but not dramatically. Yet the 1-month GBP volatility index has soared, with cable tracking it lower if inverted (see chart below). So why are investors attaching a much higher risk premium to the pound than the euro when the British economy is in no worse shape than the Eurozone’s? 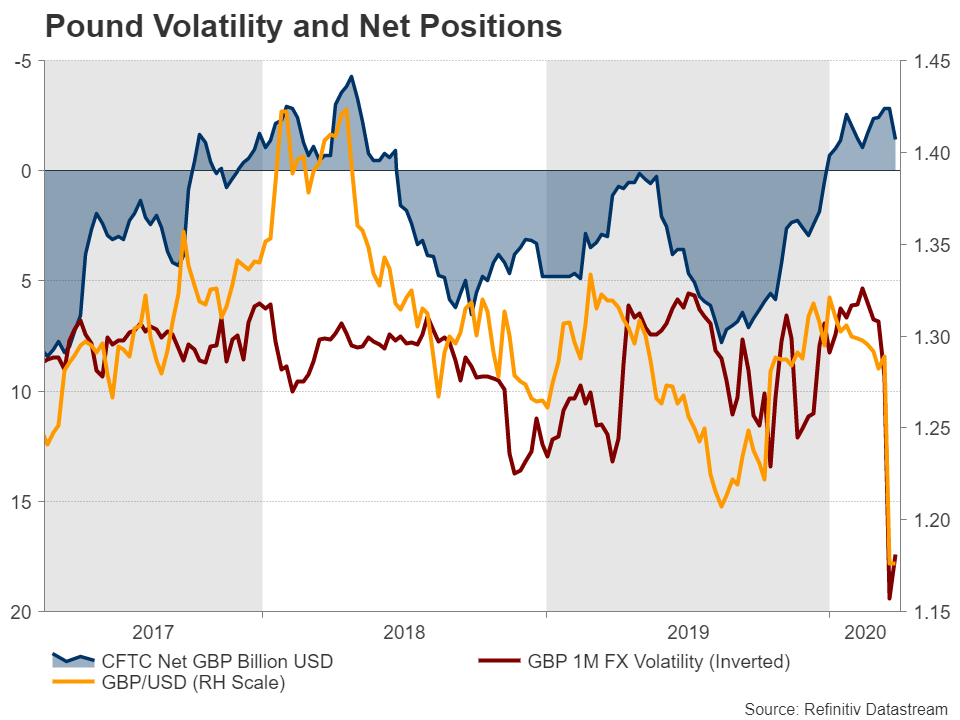 Brexit and large deficits not a good combination

The answer lies in the UK’s bloated current account deficit. When a country runs a large current account deficit relative to its GDP, it relies heavily on foreign inflows to fund the shortfall. But during times of financial turmoil when capital markets are not functioning properly, as highlighted by the recent swell in demand for dollar liquidity, currencies with big deficits are the first to be deserted by investors.

Brexit has only made matters worse, leaving sterling even more defenceless and dangerously exposed to global risks. The huge uncertainty about the UK’s future trading relationship with the EU and the rest of the world, which has yet to be determined, remains a major source of concern for investors, something that wasn’t in question prior to the Brexit referendum.

As if that wasn’t enough of a headache for the pound, the UK government has announced a spending bonanza to help the economy weather the virus crisis. The package of measures – to be financed mostly through increased borrowing – are estimated to be worth about 15% of GDP, making it the largest fiscal stimulus announced by Western governments.

Boris saves the economy but forgets about the people

However, while extra spending adds to the economic risks, it does not automatically imply a weaker exchange rate. If markets are confident that higher borrowing will pay off through higher growth, the measures ought to be positive for the currency. But that hasn’t been the case with the pound. Not because the government’s economic response hasn’t gone far enough but because investors have taken fright at Johnson’s dithering on whether to shut down the country.

In the absence of a vaccine or a cure, the only way to stop the spread of the coronavirus is to contain it. Investors already appear to have accepted that strict lockdowns are necessary. But the lack of strong political leadership by the West during this turmoil hasn’t done markets any favour.

In the past week, however, governments have finally been stepping up their responses on all fronts and more importantly, the US Senate has just agreed on a mammoth $2 trillion fiscal stimulus package. The deal has triggered a relief rally in stocks, easing the rush for the greenback and providing a reprieve for hard-hit currencies such as the pound and the commodity dollars.

Pound could yet sink lower

Having sank as low as $1.1404 last week, cable has since recovered to near the $1.19 level. That just demonstrates how vulnerable the pound has become to capital outflows as well as inflows. Of course, London’s massive financial services industry plays a vital role in these flows too, hence, they are often more reflective of movements in capital markets than UK economic fundamentals.

In the near term, however, capital flows are likely to continue to be driven by the virus fallout, especially as the infection rate in Europe and North America seems far from peaking, compelling more nations, including the UK to go into lockdown. 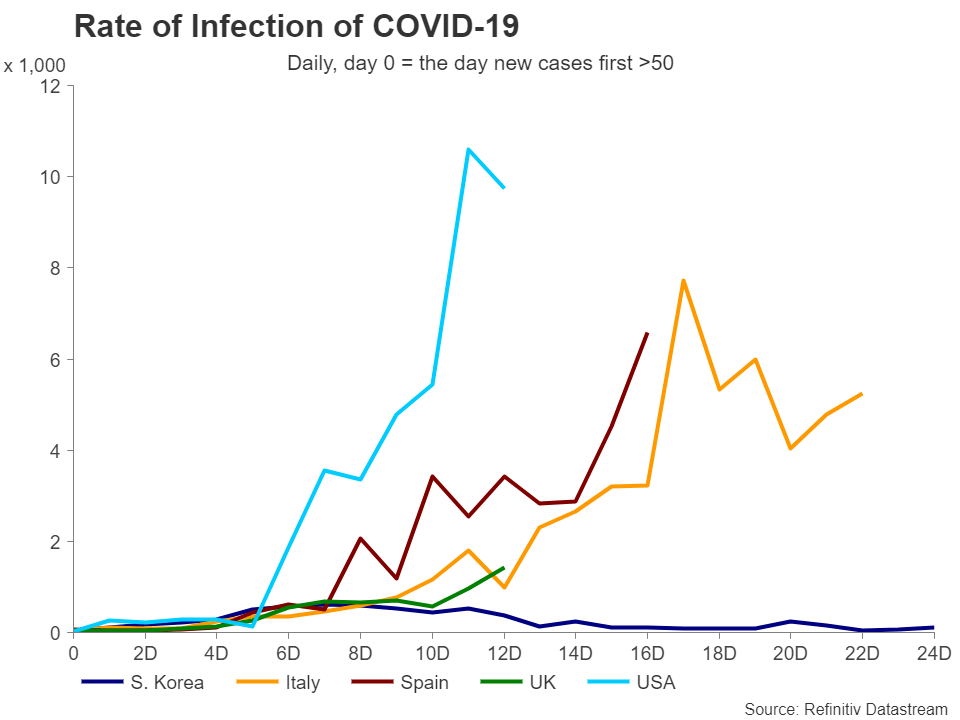 The risks for sterling, therefore, remain tilted to the downside and the next breach of support could occur at $1.1362 – the 138.2% Fibonacci extension of the September-December 2019 uptrend. A drop below this mark would increase the prospect of cable slipping to $1.10, with the 161.8% Fibonacci extension slightly below at $1.0995 underlining this support.

No sustained rebound until virus peaks

Notwithstanding whether the pound can be termed as a ‘risk-sensitive’ currency or belonging to a category of its own, it’s worth pointing out that crashes caused by panic selling tend to be reversed just as quickly when things start to turn around. If the market mood continues to improve in the coming days, cable could soon find itself back above the $1.21 level.

In the longer term, however, a sustained recovery is unlikely to come until the number of new infections in both the UK and globally begin to slow substantially enough to allow the draconian restrictions to be gradually lifted.

AUD/USD has erased a significant chunk of losses seen in the first quarter. Aussie is eyeing the 50-day average hurdle after Wednesday's bullish close. The spot is trading near 0.6249 at press time, representing a 0.25% gain on the day.

Gold: Stuck in a short-term descending triangle above 200-HMA

Gold prices remain mildly positive near $1,647 amid the early Thursday morning in Asia. The yellow metal remain in the small range after stepping back from Tuesday’s high. Buyers look for an upside break of the triangle resistance, 50-HMA.