The British pound held steady against the US dollar after strong economic numbers from the UK. Data published by the Office of National Statistics (ONS) showed that the UK economy expanded by 0.9% in November after rising by 0.2% in the previous month. The economy grew by 1.1% in the three months to November. Accompanying numbers were also strong. For example, the construction, manufacturing, and industrial output jumped sharply in November. These numbers mean that the Bank of England (BOE) will be empowered to continue hiking interest rates this year.

The euro tilted lower slightly on Thursday after the latest German GDP numbers. According to Destatis, the country’s economy expanded by 2.7% in 2021 after it declined by 4.6% in the previous year. While this growth was good, the statistics office warned that it was about 2% lower than in 2019. There were other important numbers from Europe. For example, in Spain, data revealed that the headline consumer price index (CPI) rose from 5.5% in November to 6.6% in December. In France, inflation is below the Eurozone average considering that it rose by 2.8% in December. Analysts believe that the European Central Bank will be among the last major central banks to start hiking rates.

The EURUSD pair retreated slightly after the latest German GDP and Spanish inflation data. It is trading at 1.1443, which is a few points below this week’s high of 1.1483. On the four-hour chart, the pair is between the middle and upper sides of the Bollinger Bands. It is also along the 25-day moving average and is along the 50% Fibonacci retracement level. Therefore, there is a likelihood that the pair will retreat and retest the 38.2% retracement at 1.1377. 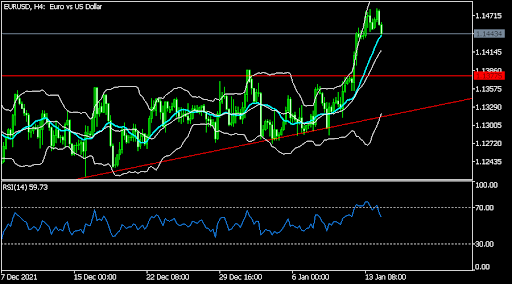 The GBPUSD declined slightly after the latest UK data. The pair is trading at 1.3710, which is slightly below this week’s high of 1.3750. The pair is significantly above the lowest level in December. It also moved slightly above the short and long-term moving averages. The MACD moved above the neutral line. Therefore, the pair will likely have a pullback ahead of next week’s UK inflation and employment numbers. 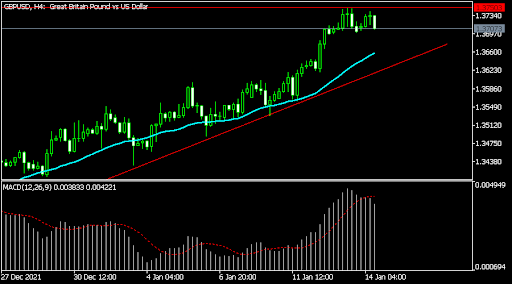 The Nasdaq 100 index declined slightly after strong bank earnings. It is trading at $15,400, which was significantly lower than this week’s high of $16,000. The pair moved below the 25-day and 50-day moving averages while the price is along the lower line of the Bollinger Bands. The Relative Strength Index declined to a low of 34. Therefore, the index will likely keep falling to the low of $15,180. 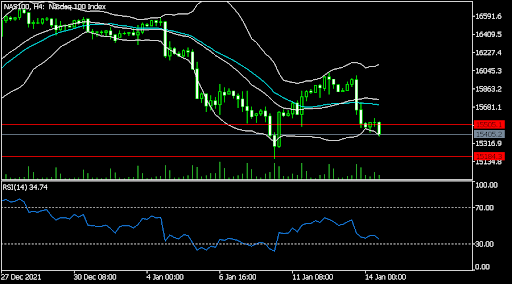