S&P 500 gave in to weakness, shifting the balance of power to the bears – this close at the 50-day moving average doesn‘t look to be as appealing as the prior ones, buy the dip isn‘t likely to work this time around. Yes, I‘m saying that after the prior week‘s long hesitation/consolidation above this key support looked as if it would work, but I became not conviced on Wednesday‘s strength lacking believable follow through on Thursday. And Friday‘s quad witching dispelled the remaining question marks – the long overdue 5%+ correction is on the doorstep. The earlier today opened short S&P 500 position is already solidly in the black.

As I wrote on Friday:

(…) Unless the 4,440 level in S&P 500 is broken to the downside, stocks appear on the verge of yet another accumulation while commodities are best positioned to rise strongly (the Fed isn‘t mopping up excess liquidity, no). Crude oil hasn‘t spoken the last word, and looks ready to continue upwards following a little consolidation around $72. Copper‘s wild ride continues, and I‘m not looking for the red metal‘s 50-day moving average to start declining.

The stock accumulation hypothesis fans are in for a reality check, and the tandem of rising USD and yields is likely to translate into commodity headwinds (including for copper, and to a somewhat lesser degree for oil), and especially (initial) precious metals headwinds. Gold will for now remain the more resilient metal while silver is being taken for a ride as wild as copper – these are debt contagion fears, after all.

As Q3 and Q4 GDP growth would be underwhelming in spite of recent strong retail and manufacturing data, that‘s going to affect the red metal. Though contained to China (for now but watch for USD-denominated bond yields of Chinese financial companies), the Evergrande situation won‘t help the commodity. The recession callers would be disappointed though, and the Fed will eventually taper (no, I‘m not looking at Sep). Still, commodities are likely to remain medium-term resilient. 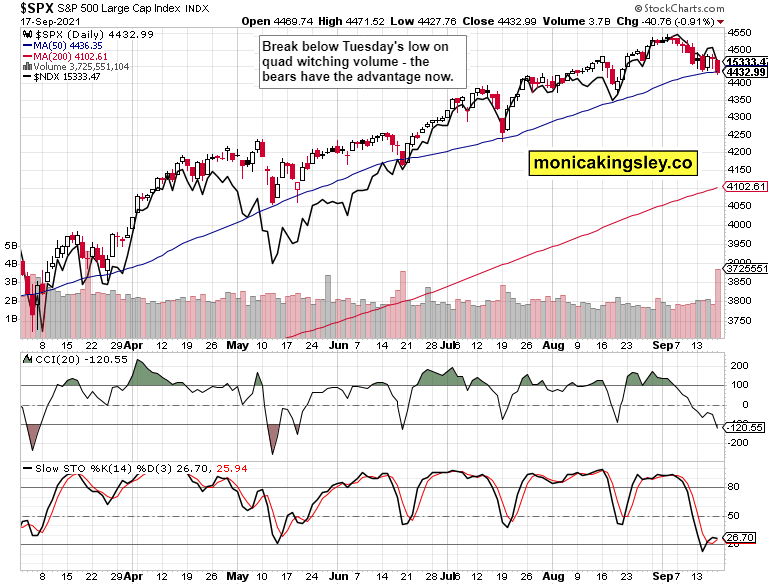 Bears have the upper hand now, and the selloff wasn‘t isolated to tech or value. If you look at market breadth, the 500-strong index is internally weaker than prices show.

Credit markets declined across the board, and the HYG on Thursday got follow through that doesn‘t appear as over just yet.

Gold held up better than silver but it might very well be just a daily breather – the bears have an advantage, and miners are leading lower. 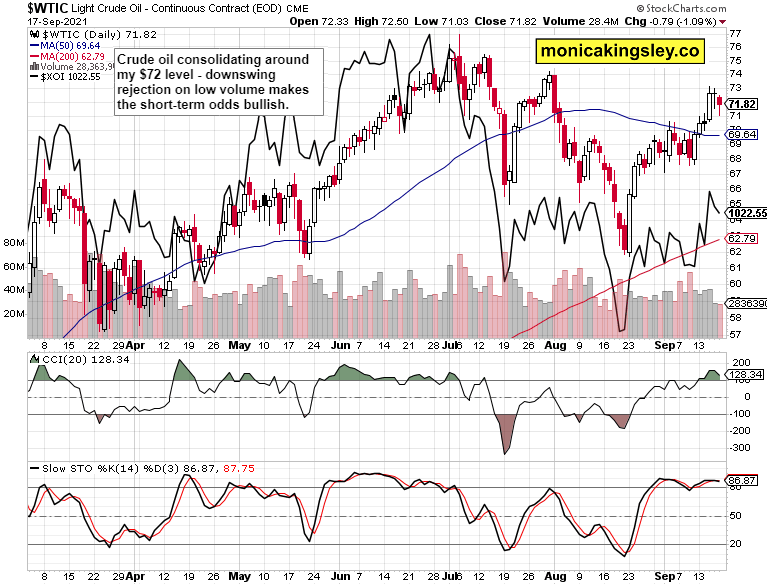 Oil stocks are supporting a little breather in oil now – the coming correction is likely going to be a buying opportunity (after the dust settles). 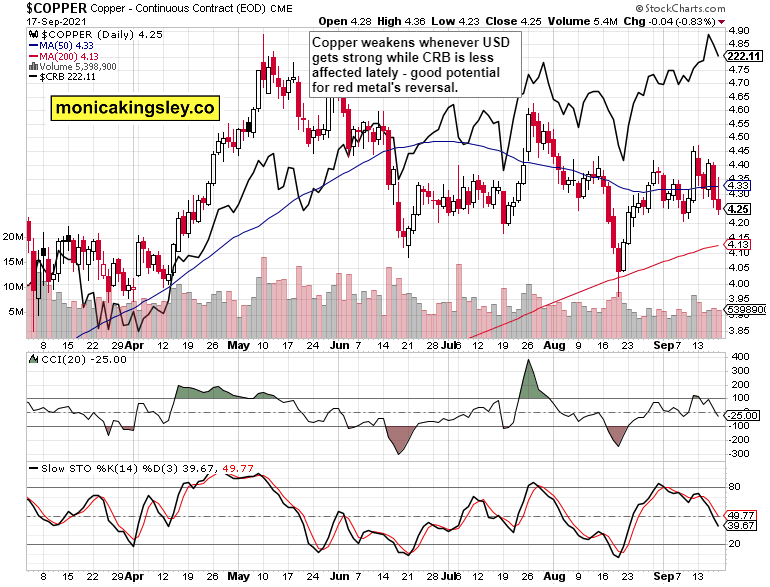 Copper wants to lead to the downside, but is more or less range bound. Unless commodities give in (that would require a genuine taper surprise), the red metal is likely to recover from any selloff, however steep, yet remain underperforming the broader commodity index. 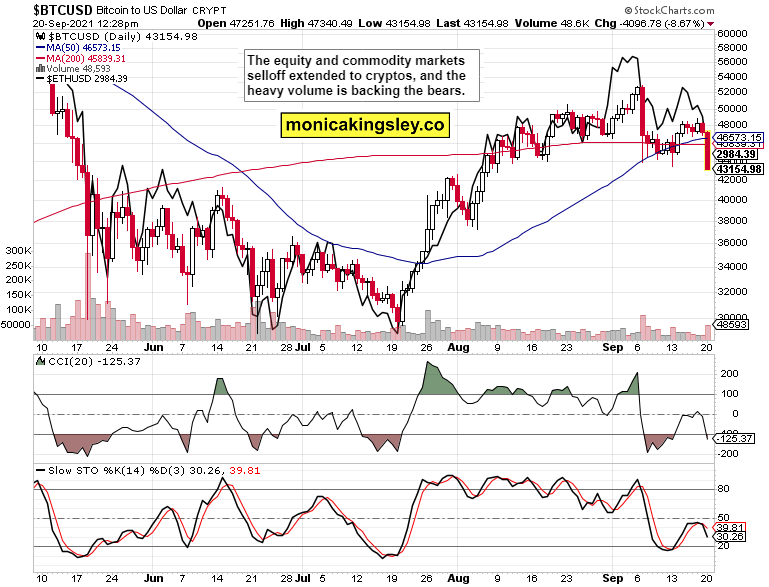 Bitcoin and Ethereum are joining the selloff, and the golden cross is in danger of being invalidated fast.

The short-term outlook has shifted to bearish in stocks and cyclically sensitive commodities, and continues being challenged in precious metals. Not until the dollar stalls and yields stabilize can we look for price increases in the mentioned asset classes, affecting the crypto bull markets too.

GBP/USD is advancing towards 1.3800, reaching the highest levels in five weeks, helped by a broad decline in the US dollar and rising BOE rate hike bets. The greenback is losing ground amid a resurgent appetite for riskier assets. BOE's Bailey hinted at a rate hike to contain inflation.