What you may have missed this week

A big week for British data

It's been another busy week for UK data releases, with Sterling starting off the week a bit stronger than we've seen in recent months. The Pound was at its highest against the Euro for four months until inflation data hit on Tuesday, below forecast expectations. Inflation went up to 1.8% last month, from 1.6% in December 2016, the highest since June 2014. This was still less than markets had expected, as retail prices balanced out the increasing fuel costs. This was a bad sign for low UK interest rates and knocked Sterling down again. Poor Sterling was knocked off its pedestal again this morning when January retail sales data fell well below the expected levels. Humpty Dumpty springs to mind...

Employment in the UK is at its highest since July 2005, yet wage growth remains poor, at 1.4% for 2016. The results showed significant growth in part time employment in the UK. The 4.8% unemployment figure is great news for the UK and looks even more impressive when compared to the Eurozone's rate of 10% and other high unemployment rates globally. The Pound did ok, but didn't enjoy as much upward movement as you would expect from this positive data.

Business confidence and employment lower than expected in New Zealand and Australia, but currencies remain strong

Australian employment was up, with the unemployment rate falling to 5.7% from 5.8%. This had little effect on the Australian Dollar. However, the AUD strengthened following better than expected Business Confidence data, which in turn, will have enjoyed a boost from stronger Chinese Inflation data, down to the rising costs of commodities and energy.

New Zealand saw a drop in consumer confidence in February. According to the snappily titled, ANZ-Roy Morgan Consumer Confidence Index, this figure dropped to 127.4 from 128.7 in January, however, it's still positive, so the New Zealand Dollar enjoyed a small boost. The New Zealand Business Confidence Index is expected to yield a similar result.

The Euro started the week off on a poor footing. In Europe, the European Central Bank (ECB) released their last meeting minutes today, but everything that was discussed was already brought up in the statement following the meetings, so no real surprises there. Policymakers and investors are more concerned about the situation with Greece right now, and the ongoing French election campaigns.

There was little other data released for the Eurozone this week, other than the improved GDP growth data which showed all states of the EU were actually growing. That is a rarity these days and served to strengthen the Euro somewhat. However, Eu industrial production fell more than forecast in December and that has capped any gains.

Janet Yellen's comments spark more talk of an interest rate hike in March The important news from the US this week was the testimony to the Senate Banking Committee of Janet Yellen, US Federal Reserve Chair. Markets have been eagerly anticipating this speech and any snippets of information that can be gleaned about potential interest rate hikes. This is therefore very important for world markets, the US Dollar and its major currency partners. Traders now believe that the chances of an interest rate increase in March 2017 are high. That belief will not have been damaged by news of higher US housing starts and rising commodity prices. 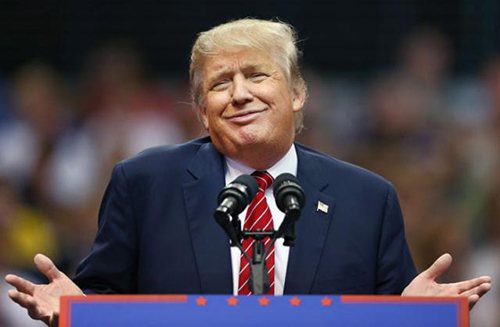 Trump's Trumpisms of the Week...

This week, Donald Trump's comments on the US's long standing demand for a ‘two-nation' approach to the Israel/Palestine conflict have set the cat among the pigeons – again... Donald Trump's official inauguration photo went viral for its grammatical faux pas: "No dream is too big, no challenge is to great. Nothing we want for the future is beyond our reach". Perhaps spellcheck was beyond his communications team's reach on this occasion?

"I don't think there's ever been a president elected who in this short period of time has done what we have done." President Donald Trump

When asked about the details of his National Security Advisors conversations with Russians before the election, President Trump said ""The leaks are absolutely real, the news is fake, because so much of the news is fake."