Tuesday the Dow fell because of weakness from Goldman Sachs (the Dow is price weighted and Goldman has a high price) while the other indexes were mixed. Ignoring today’s action and focusing on the last few weeks of trading, there’s no question the market has been unusually quiet. As you can see from the chart below, the VIX being below 10 has gone from a very rare event to a common occurrence. Many investors who started before 2008 get scared of this chart because they feel it’s the calm before the storm. I’m not worried about this at all because low volatility doesn’t mean more is coming soon. At some point in the indefinite future, the VIX will likely be higher, but there needs to be a catalyst for the change to happen soon. Strong earnings for the time being means more of the same boring trading for the next few months.

The reason why I follow the VIX is it has great predictive power. As you can see from the chart below, the blue lines are bands the S&P 500 is supposed to fall within based on where the VIX is at. The green line shows the 1-month actual S&P 500 returns. The returns almost always fall within the bands and they are usually tight when the bands are narrow. It’s often discussed that the VIX is a terrible measure of intermediate term systemic risk. I have mentioned this to show that the risk in the next 2 years isn’t diminished by a low VIX. For example, the VIX was low in 2007. However, it was also low in the 1990s and nothing bad happened then. The key is to recognize what the VIX does well. It predicts 1-month performance not 2 year performance. 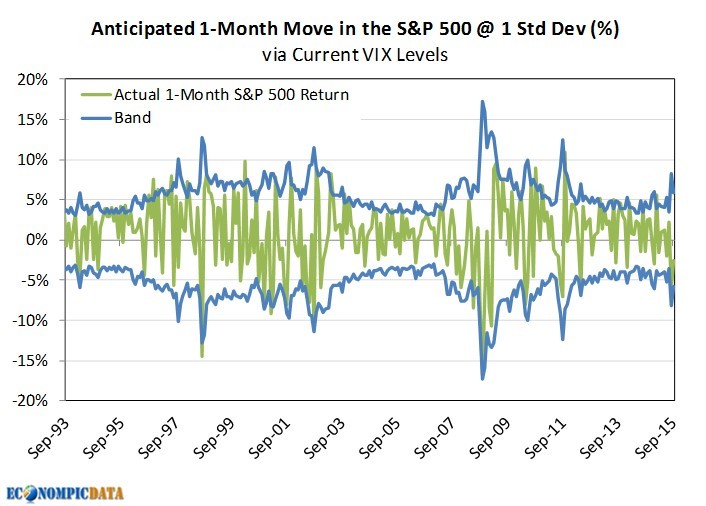 The chart below is a survey by BAML which makes the same point I have been making previously. The last answer is the percentage of investors who think a delay in corporate tax reform is the biggest risk which can push stocks down. As you can see, the number has fallen from 14% to 4% as investors have moved on from expecting tax reform to be a boon for stocks. Maybe they are right as 2 more GOP senators recently defected from the latest healthcare bill. However, I still think Mitch McConnell will use all the negotiating skills he has acquired over the years to get something done. The latest news in this saga is that Mitch will try to pass a bill which repeals Obamacare after a 2-year waiting period and tacks on amendments to get rid of the parts of Obamacare the GOP doesn’t like.

Keep in mind that in the beginning of the year I was in the camp that the market was too optimistic about fiscal stimulus being passed. I was right as nothing has been done yet. Part of the reason why investors don’t think a delay in tax cuts is a tail risk is because it already has been delayed. Low expectations mean a pop when stocks realize tax reform is happening. The GOP needs a legislative win because however this healthcare saga gets resolved, they will come out looking bad. Tax cuts are a popular way to regain popularity which is why I think it will happen next year. 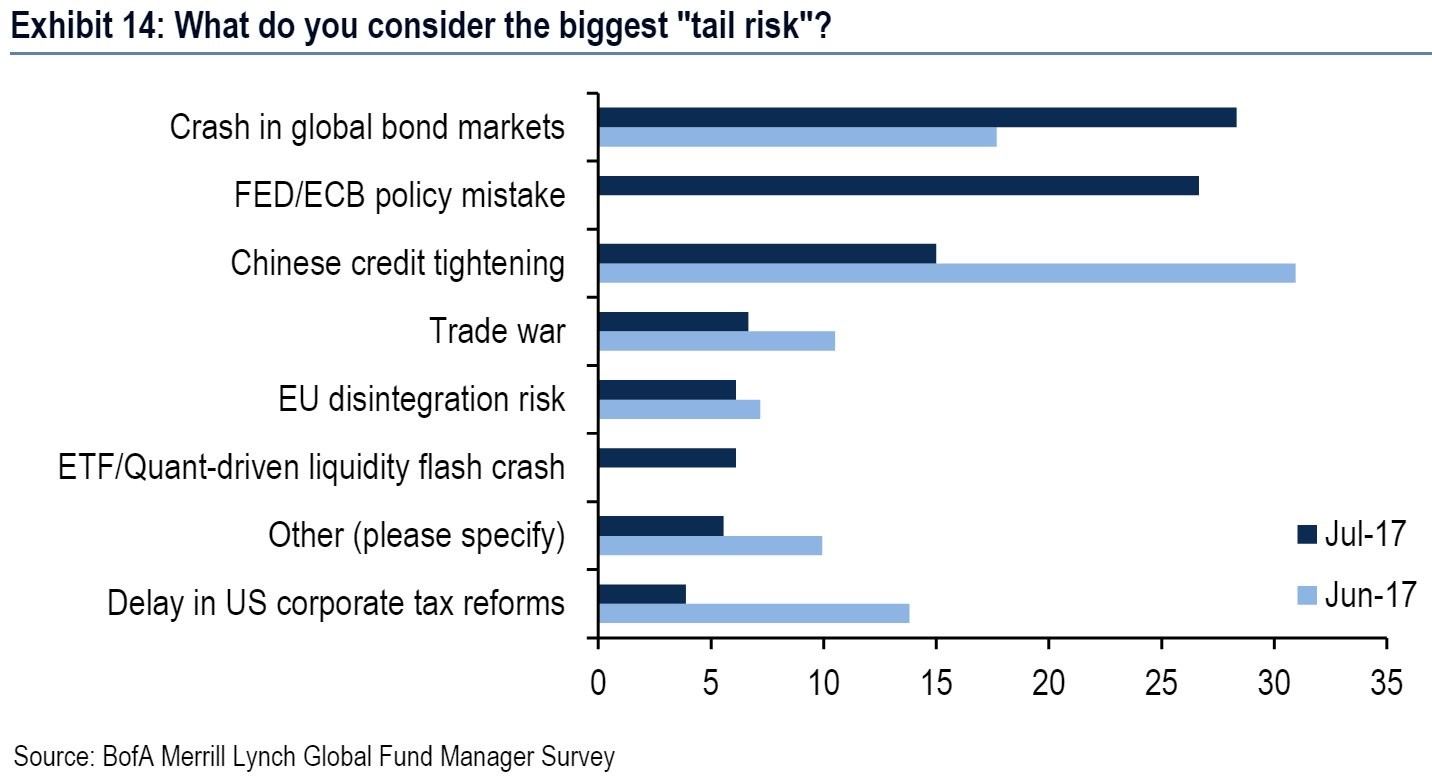 Lately I have been rebutting some bearish charts because I have realized that some of the doom and gloom charts aren’t rigorously objective. That doesn’t mean there’s not an argument for stocks being overvalued. I’m still in that camp. A rigorous chart which shows stocks to be expensive can be seen below. It shows what has driven stock market performance since 1992 by quarter. The blue is multiple expansion/contraction and the orange is increases/decreases in earnings. When the sum of the lines are above zero, the market is up and when they are below zero the market is down. There have been 21 straight quarters of multiple expansion regardless of total performance. That’s the longest streak ever with the 20-quarter streak from Q2 1995 to Q1 2000 being the second longest. It’s important to recognize that stocks can get more expensive when they fall if earnings fall quicker. 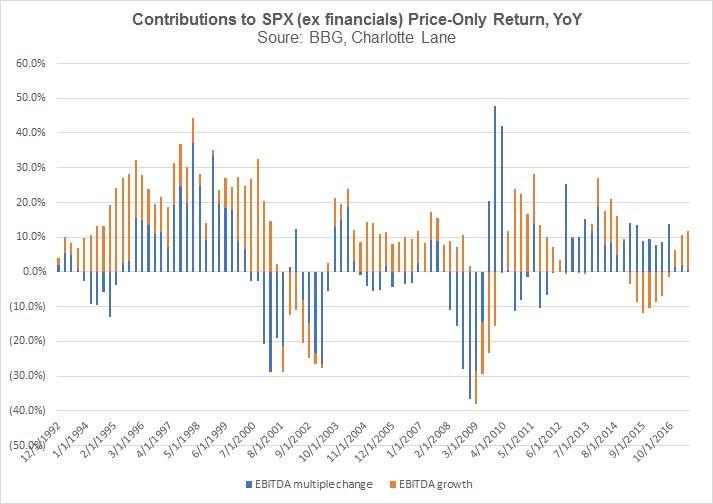 If you think it looks like the blue bars are shorter in this streak than in the streak in the 1990s, you’d be wrong. The chart below compares enterprise value to trailing twelve-month EBITDA. As you can see, the two metrics which exclude tech have a similar valuation to the 2000s stock market bubble. The one with tech is still two points below the 2000s bubble. That makes an interesting point because many are worried about the price performance of the FANG stocks being too good. The reality is the tech stocks aren’t the ones you should be worried about. Stock performance doesn’t equate to how it’s being valued. The best argument against tech is that margins will compress, but that argument applies to other sectors. At the worst tech should perform as the market does in a correction. However, that may be optimistic thinking because tech is traditionally a risk on trade, so it may get irrationally sold. 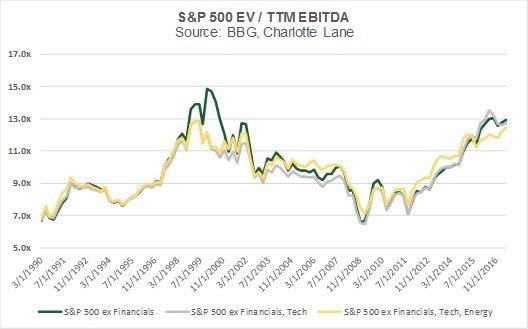 The VIX is reaching extraordinary levels. Usually I like to focus on the long-term picture which includes economic reports and earnings reports, but the VIX is catching my eye because of its low price. The chart below shows the lowest daily close in the VIX since 1990. 13 of the 23 lowest closes have occurred since May of this year. There are many false interpretations of what this means. These false interpretations come from bias. The meaning of the VIX’s low level is that the stock market is happy with the strong earnings and doesn’t see anything in its path to stop them from going higher. Fiscal policy can only help earnings as the GOP won’t be raising taxes or adding regulations. The market is sanguine on the Fed’s unwind. That final point is what gets me nervous as this policy change has never been done to this magnitude. I would expect something unforeseen to occur which would warrant at least a VIX in the teens. The VIX only reflects near term risk, so it may begin to elevate as we get closer to the event in September/October. 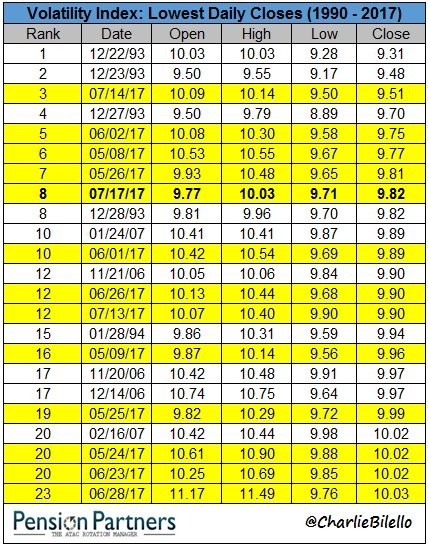