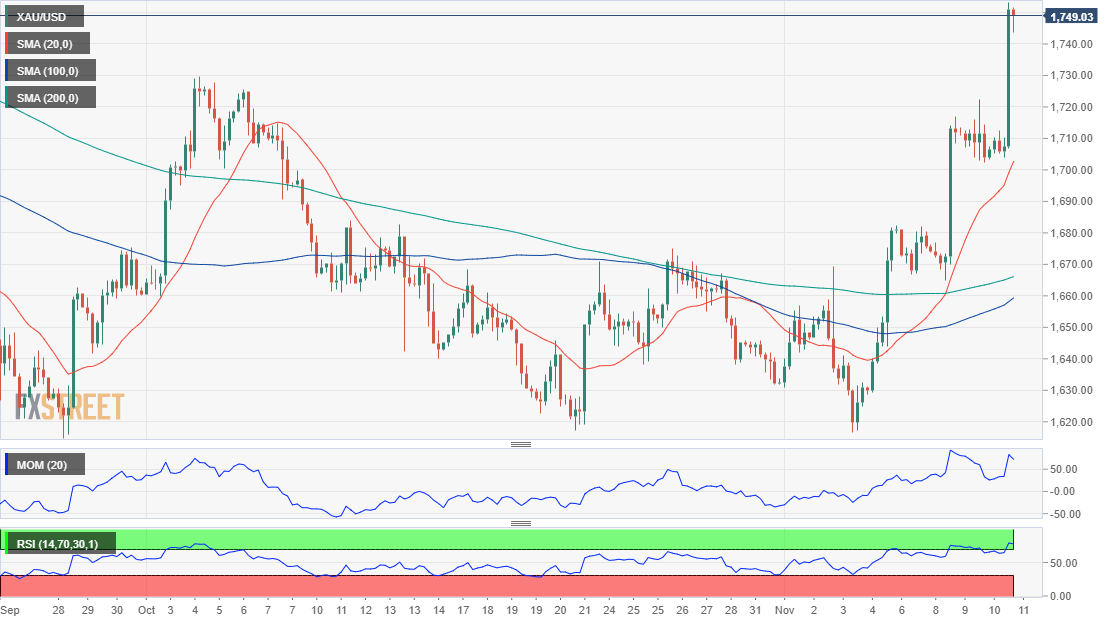 Spot gold trades at around $1,749 a troy ounce, its highest since last August. The American Dollar plummeted following the release of the US Consumer Price Index (CPI). Inflation in the country came at 7.7% YoY in October, easing from 8.2% in September and after posting a multi-year high of 9.1% last June.

Prices pressures have been in the eye of the storm after the world began recovering from the early stages of the coronavirus pandemic and was exacerbated by the globalized ultra-loose monetary policy. Early this year, central banks embarked on quantitative tightening in the hopes draining massive liquidity will bring inflation back down. The US Federal Reserve delivered multiple 75 bps rate hikes, and Chair Jerome Powell surprised in the last meeting with hawkish rhetoric on future rate decisions. Powell pledged long ago he would do whatever it takes to bring inflation down, regardless of the potential harm higher rates may do to economic growth.

With that in mind, market players welcomed signs inflation is finally receding, allowing the US central bank to take a more conservative approach to monetary policy. Following the CPI release, the CME Group FedWatch Tool showed that markets are pricing in an 80% probability of a 50 basis points rate hike in December, compared to 52% before the event.

Wall Street soared, with the Dow Jones Industrial Average up roughly 2.90% at the time being, while the S&P500 added over 4%. Finally, the Nasdaq Composite is up a whopping 5.84%. At the same time, US government bond yields edged sharply lower, with the 10-year Treasury note yielding 3.85%, down 30 basis points on the day.

XAUUSD maintains its bullish momentum, trading near an intraday high of $1,753.29 a troy ounce. The daily chart shows that the bright metal has stormed through the 100 SMA for the first time since last May. The 20 SMA gained bullish traction far below the longer one while technical indicators picked up near overbought readings.

In the near term, and according to the 4-hour chart, the bright metal is overbought, with technical indicators losing upward strength but holding at extreme levels without other signs of bullish exhaustion. In fact, with the price holding near the daily high, the risk skews to the upside. At the same time, the 20 SMA heads firmly north above the longer ones, and it currently stands around $1,700, reflecting buyers' strength post-US data.