Gold witnessed a modest pullback from the $1,745-46 supply zone during the Asian session on Wednesday and eroded a part of the overnight gains to two-week tops. The US dollar found some support from a modest uptick in the US Treasury bond yields and for now, seems to have stalled its recent corrective slide from four-month tops. This, in turn, was seen as a key factor that exerted some pressure on the dollar-denominated commodity. The safe-haven precious metal was further pressured by the upbeat US economic outlook, thanks to the impressive pace of coronavirus vaccinations and US President Joe Biden's spending plan.

Meanwhile, the reflation trade has been fueling expectations for a relatively faster US economic recovery from the pandemic and a possible uptick in US inflation. This, in turn, raised doubts that the Fed will retain ultra-low interest rates for a longer period. Hence, the key focus will remain on Wednesday's release of the latest FOMC meeting minutes. Investors remain convinced that stronger fundamental will force the Fed to raise interest rates sooner than anticipated. Any clues that the conditions to begin tightening were discussed at the meeting held on March 16-17 should weigh on the non-yielding yellow metal.

In the meantime, the US bond yields might influence the USD price dynamics and provide some impetus to the commodity. Apart from this, the broader market risk sentiment will also be looked upon for short-term trading opportunities amid absent relevant market moving economic releases from the US.

From a technical perspective, the recent rebound from multi-month lows faltered near the $1,745-46 heavy supply zone. This should now act as a key pivotal point for intraday traders, above which the commodity is likely to accelerate the move towards the $1,760-65 support breakpoint, now turned resistance. A sustained move beyond will validate a bullish double-bottom formation near the $1,677-76 region and set the stage for additional gains. The metal might then accelerate the move towards an intermediate resistance near the $1,780-82 zone before eventually aiming to reclaim the $1,800 round-figure mark.

On the flip side, the $1,720 horizontal level is likely to protect the immediate downside. This is followed by the $1,700 mark, which if broken decisively will negate any positive bias and turn the commodity vulnerable to retest the $1,677-76 region. Some follow-through selling will be seen as a fresh trigger for bearish traders and pave the way for an extension of the recent downward trajectory. The next relevant support is pegged near the $1625 level ahead of the $1600 round-figure mark. 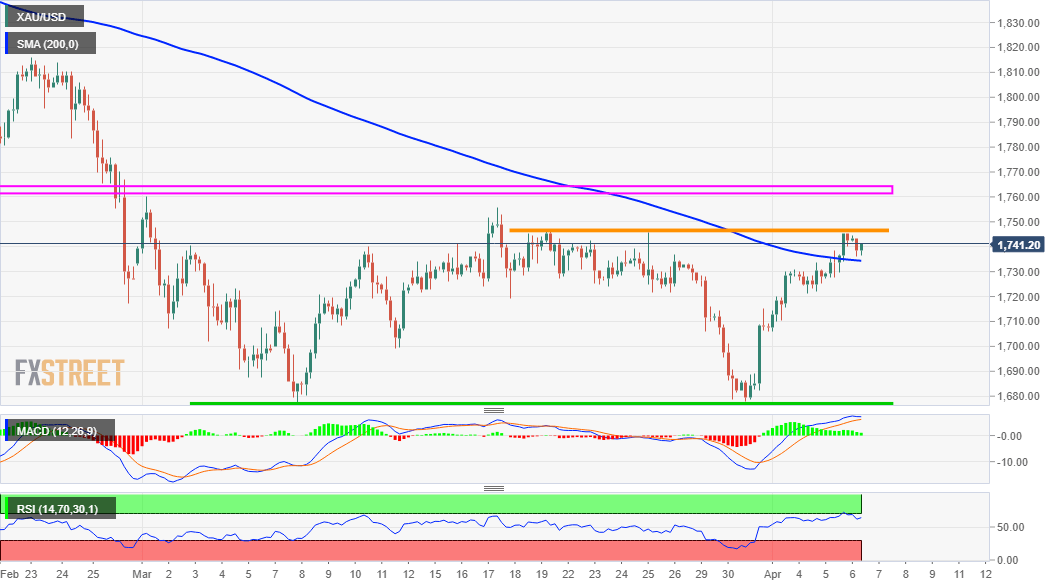