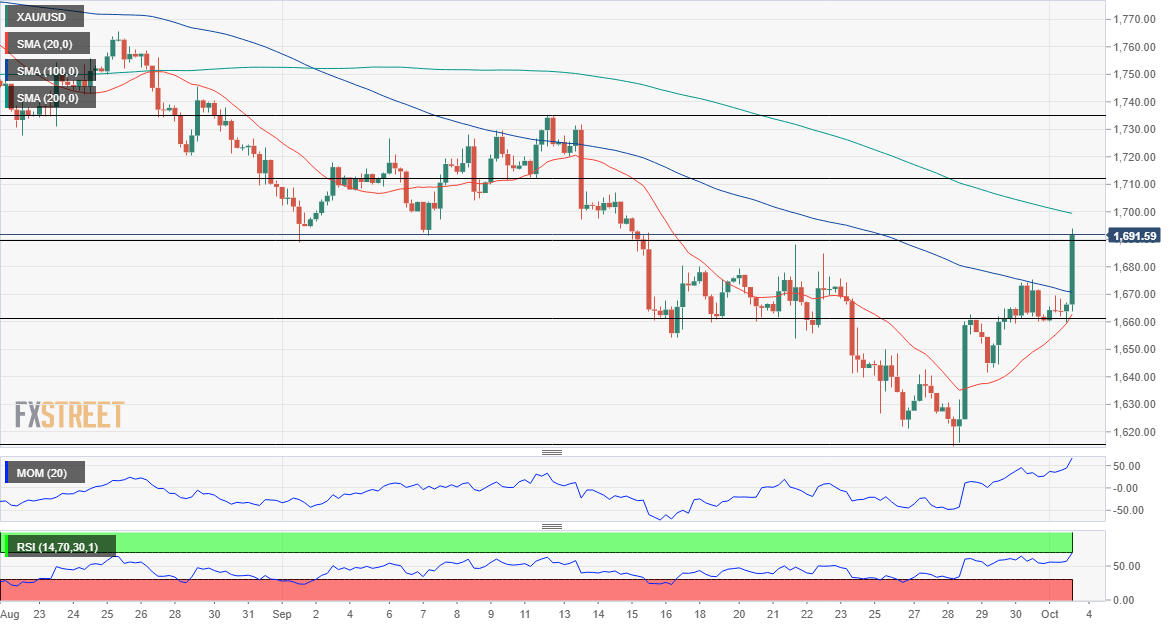 Spot gold picked up momentum after Wall Street’s opening, and runs above $1,690.00 a troy ounce, trading at its highest in three weeks. The greenback sheds ground on the back of the better performance of equities, coupled with tepid US data.

European indexes posted modest intraday advances, helping their US counterparts to advance at the beginning of the session. Stocks gained on relief after the United Kingdom government rolled back a plan to cut a 45% income tax rate, which would have added to the country’s financial turmoil.

Meanwhile, the latest US ISM Manufacturing PMI came in below anticipated. Business output contracted to 50.9 in September from 52.8 in August, while the final reading of the S&P Global index for the same period was upwardly revised from 51.8 to 52. The reports were good enough to spook the ghost of recession but not enough to trigger dollar strength. XAUUSD holds on to most of its intraday gains as speculative interest digests the news.

Demand for the American currency is also being affected by easing government bond yields. Treasury yields quick-started the last quarter of the year on the back foot, with the 10-year note losing roughly 20 bps to currently pay 3.60% and the 2-year note offering 4.06%.

Several Federal Reserve speakers will hit the wires through the remaining US session. Nevertheless, market players do not expect anything different from the usual rhetoric of taming inflation at any cost.

From a technical point of view, the risk is slowly turning north. XAUUSD is hovering around the 50% retracement of its latest daily slump, measured between $1,765.47 and $1,614.81 at $1,689.96. The daily chart shows that the pair is crossing above a bearish 20 SMA for the first time since mid-August, and a daily close above it should help confirm further gains ahead. Technical indicators head firmly higher but are still within neutral levels and battling to enter the positive ground.

The upward momentum is stronger in the near term. The 4-hour chart shows that technical indicators head firmly north within positive levels, currently nearing overbought readings. At the same time, the pair has advanced further above a bullish 20 SMA while breaking above a mildly bearish 100 SMA. The latter converges with the 38.2% retracement of the previous slide at $1,672.20, reinforcing the static support level. A critical resistance area is around $1,707.70, the 61.8% retracement of the aforementioned daily decline. Sustained gains beyond the price zone should hint at sustained dollar weakness across the FX board.