The number to watch is Real Final Sales, not the baseline GDPNow estimate. The difference between the numbers is inventory adjustment that nest to zero over time.

RFS is the bottom-line estimate for the economy.

It's cyclicals (durable goods and housing) that tend to drive expansions and recessions.

The last GDPNow forecast was on August 4.

The jump was not due to today's CPI report but rather the blowout jobs report on August 5. 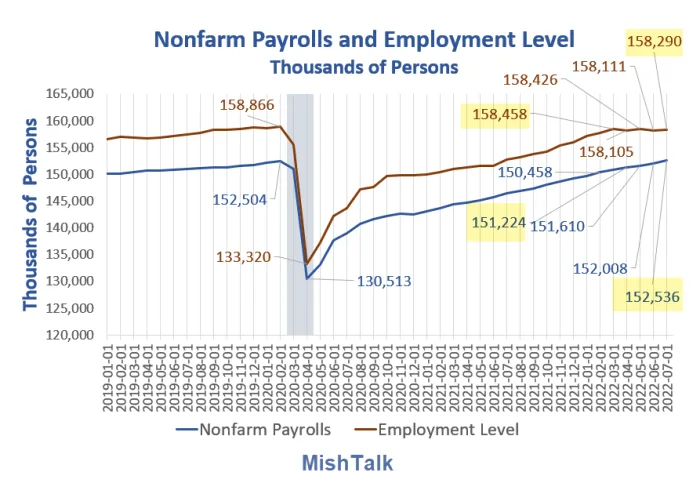 Nonfarm Payrolls vs Employment Level. Chart by Mish. One set of numbers is wrong.

On August 5, I commented I'm Calling BS on the Second Straight Amazing Jobs Report, Understanding Why

The household numbers are admittedly noisy, but a five month divergence now stands out.

I suspect labor turnover and retirements have seriously distorted payrolls and at least some of this strength will be taken away.

Regardless, I'm calling BS. At least one set of numbers is seriously wrong.

The baseline job numbers do not match 200,000 layoffs at Amazon, consumer sentiment, rising jobless claims (albeit from record low levels), warnings from retailers including Walmart and Target, layoffs at Walmart, and two warnings from Micron on demand for computer chips.

I smell huge revisions to the job numbers. If so, this forecast jump will be short lived.

There are three retail sales reports coming and a myriad of housing reports. Those will hold the key to the third quarter, not the July jobs report.

Housing will be another big bust this quarter. And durable goods rate to follow housing. Manufacturing rates to be negative.

Hopes for the quarter rest solely on consumer spending and falling inflation. But don't count on strong retail sales.

Add it all up and you have a third quarter of negative GDP.