To taper or not to taper? For a full week, that has been the question, and optimism for more Fed support fueled a recovery. However, they can have only been kicked toward the all-important US jobs report, assuming that UK covid cases remain under control.

This week in GBP/USD: Optimism returns

Past tense – "At July meeting I thought it could be appropriate to start taper this year" – these comments from Federal Reserve Chair Jerome Powell sum up his dovish message. While he acknowledged employment improvement, he had a mixed analysis of inflation's direction and seemed concerned about the virus.

Powell also contradicted a vocal chorus of hawks among his colleagues, changing the narrative at once. However, the writing was on the wall already earlier.

Two soothing signals from the Federal Reserve sent the dollar down early in the week. First, Dallas Fed President Robert Kaplan showed openness to reconsider tapering the bank's $120 billion/month bond-buying scheme in response to the Delta COVID-19 variant. Secondly, the bank announced that its Jackson Hole Symposium would be held virtually.

If the Fed is forced to scale down its activity, so does the broader economy – that line of thought implies additional support from the bank. Markets advanced in response to this optimism, shrugging off the reason for such a delay – the virus.

On coronavirus, the US Food & Drugs Administration (FDA) provided a reason to be cheerful, by giving permanent approval to the Pfizer/BioNTech vaccine. This technicality facilitates immunization mandates and could encourage uptake of the jab.

Another positive development on the virus front came in some signs this current wave is nearing its peak. The overall pace of infections has slowed down to double-digit percentage points and fell in states that were initially hit hard.

This "Goldilocks," in which the virus is bad enough to stop the Fed but not the economy, sent the dollar down. However, Britain's rising covid cases limited sterling's gains. The daily infection rate hit the highest since mid-July, showing the impact of "Freedom Day." 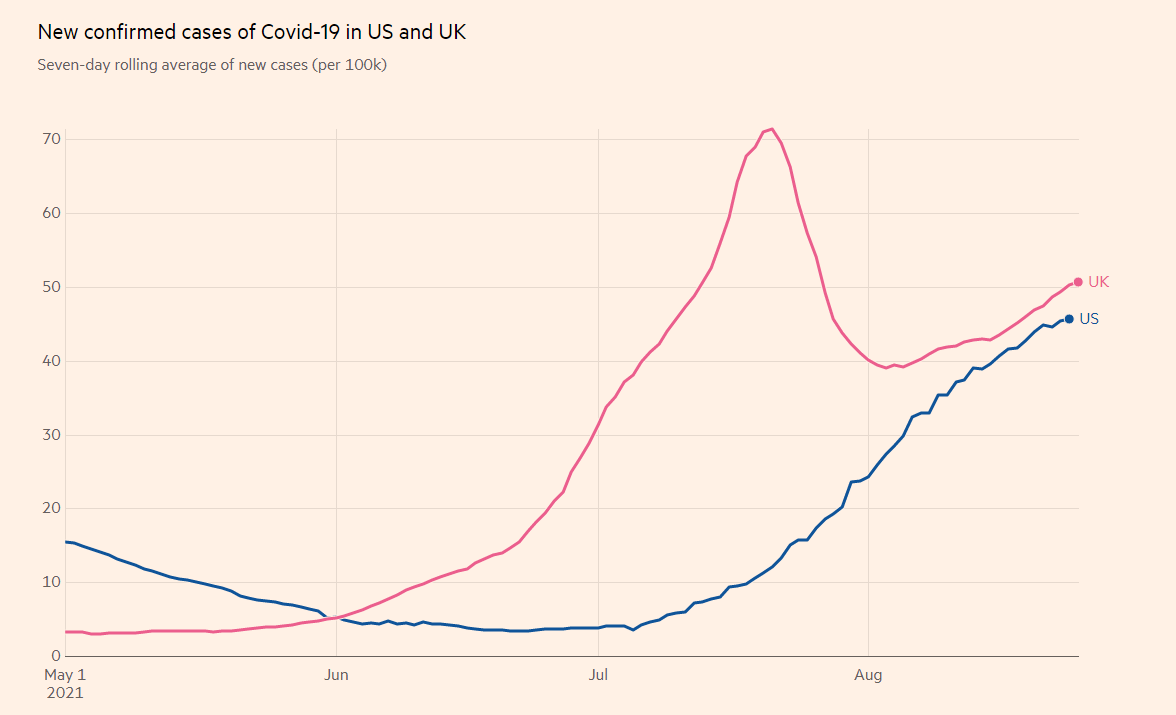 US data has been mixed. While Gross Domestic Product was only upgraded to 6.6% annualized in the second quarter, the minor miss of 6.7% resulted from inventory drawdown. That implies a bounce in inventories in the following quarter. Durable Goods Orders rose by 0.7%, better than estimated, but core orders missed projections.

Later in the week, the dreadful explosions in Kabul hurt the market mood but had little impact on the dollar. Investors had previously fully ignored Afghanistan and now show some interest.

The most significant data point from the UK missed and added to sterling's struggles to fully capitalize on the dollar's decline. Markit's preliminary Services Purchasing Managers' Index fell to 55 points in August, considerably worse than near 60 that had been projected.

Another drag on the pound came from Brexit-related shortages of lorry drivers and also of butchers. Concerns of empty shelves in some supermarkets marginally weighed on sentiment.

UK events: Will covid come down?

Prime Minister Boris Johnson wants the reopening to be irreversible – but consumers could remain wary of the virus and shy from dining and shopping. Apart from following daily virus reports, the seemingly stalled vaccination campaign is also of interest.

Higher blue lines on the left-hand part of the chart below would encourage investors: 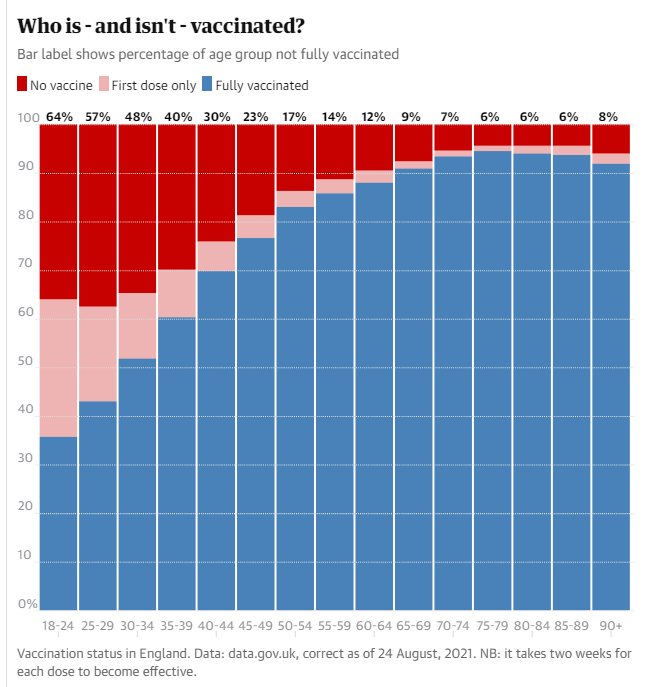 Apart from the adverse impacts of Brexit on supermarket shelves – now and leading into Christmas – investors may find themselves following comments from politicians on both sides of the Channel. As August draws to a close, officials return from their vacations and may want their voices heard on the Northern Irish protocol.

Customs issues related to trade between Great Britain and the Emerald Isle have been put on hold during the summer – a Brexit truce – and may now come to haunt the pound. No news has been good news but may end as early as next week.

British traders have one more day off on Monday before returning to a relatively light economic calendar. Markit's final PMI figures and a potential testimony by Bank of England officials in parliament – still to be confirmed – stand out.

US events: Nonfarm Payrolls towers over everything else

The best is kept for last – in terms of market movement. Nonfarm Payrolls figures for August may tip the scales in favor – or against – of a Fed tapering announcement in the next meeting. The battle between doves that want to keep printing dollars at a high rate for longer and hawks that want to withdraw some stimulus is raging.

Economists expect an increase in the US to report an increase of 665,000 jobs in August. That would be down from 943,000 that was seen in July but still reflecting a quick recovery. Average Hourly Earnings are set to decelerate from 4% to 3.8% YoY.

While expectations may change during the week, it would be safe to say that if the NFP nears one million jobs, it will imply significantly higher chances of a taper announcement and a dollar boost. Conversely, a headline figure closer to 500,000 would likely plunge the dollar on prospects that the Fed would hold its ground.

If wages hold at around 4%, it would imply elevated inflationary pressures and could soften any weak increase in job gains. However, the headline will likely dominate markets more than anything else.

Ahead of the all-important jobs report, the Conference Board's Consumer Confidence is eyed on Tuesday. After the parallel figure from the University of Michigan was badly disappointed, the CB figure is also set to drop.

Two Nonfarm Payrolls hints await traders on Wednesday. ADP's private-sector jobs report is set to show an increase of over 500,000 positions and may move markets even if its correlation with the official NFP is loose.

ISM's Services PMI – usually a critical hint for the jobs report – is due out only late on Friday but could still have some impact. A minor decrease from 64.1 to 63 points is on the cards. 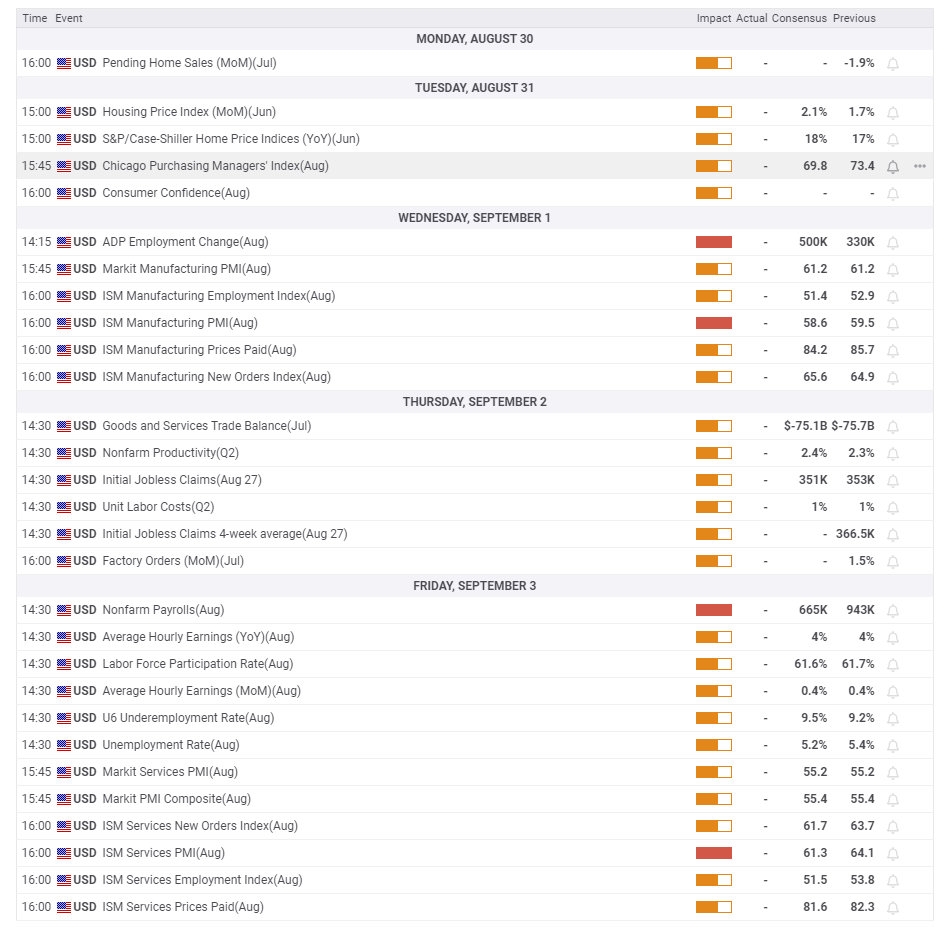 Investors will also be following developments in Afghanistan. Tuesday, August 31, is the deadline set by President Joe Biden to withdraw American troops from the troubled country. If America suffers casualties or its involvement extends beyond that date, the adverse impact could support the dollar.

Delta's "Goldilocks" impact on investors is unlikely to last. If the current moderation trend continues and cases even begin dropping on the national level, the dollar would strengthen. If infections accelerate their rise, the greenback could benefit from safe-haven flows. The balance in which the currency suffers is delicate.

America's immunization campaign has picked up from the lows of roughly 500,000 to nearly 900,000 injections per day in recent weeks. That is still below the peak of 3.38 million on average recorded in April. Any additional increase would be encouraging. 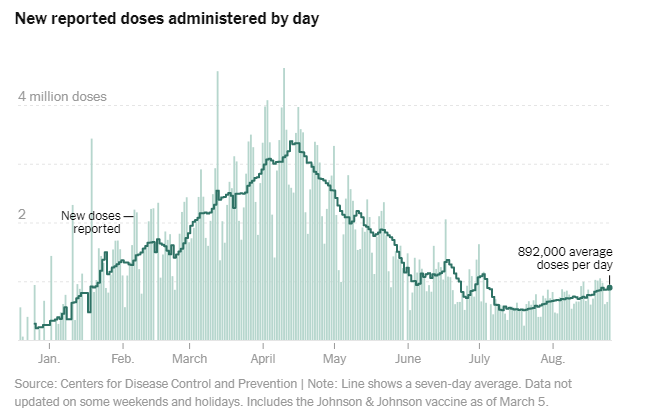 Bears are gaining ground – momentum on the daily chart has turned negative, and the pair has failed in its attempt to recapture the lost 200-day Simple Moving Average (SMA). Moreover, the 50-day SMA is about to break below the 200-day SMA – what would consist of a "death cross pattern." That would be a bearish sign.

Support awaits at 1.37, which provided support in late August. More significant support awaits at another round level – 1.36, which was August's low. Close by, 1.3570 was July's trough and the lowest since early in the year. Further down, 1.3450 and 1.3310 are noteworthy.

A third consecutive US Nonfarm Payrolls could convince markets that Fed tapering is imminent, boosting the dollar and sending sterling lower. Rising UK covid cases and Brexit will likely put pressure on the pound. Overall, there is room for GBP/USD falls.

The FXStreet Forecast Poll is showing that experts doubt the most recent bounce and foresee a fresh fall. Do they expect a robust NFP figure? On the other hand, the medium and long-term targets remain bullish. Average targets are little changed in comparison to last week. 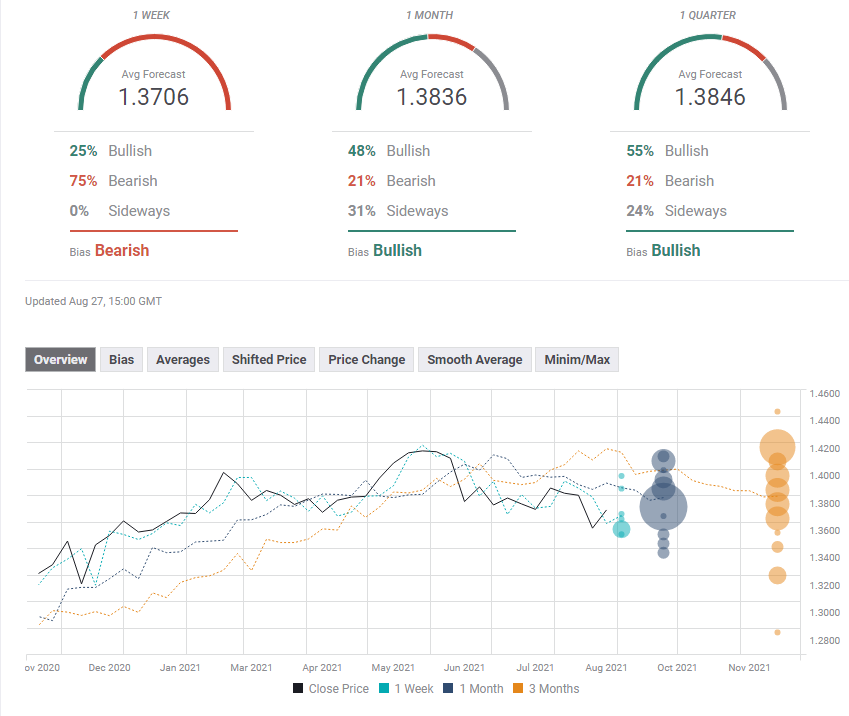